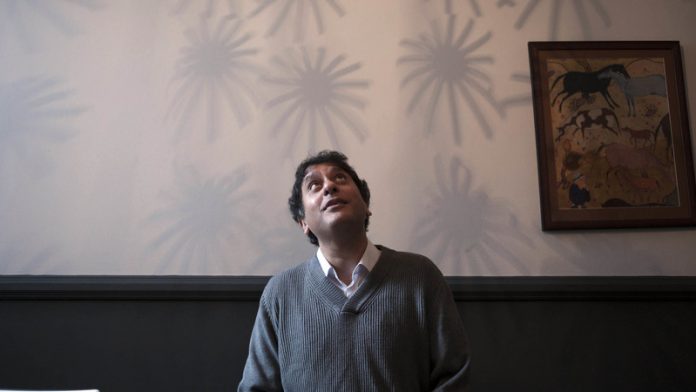 The 1990s — a decade book-ended by two wildly contrasting historical events, the release of Nelson Mandela from Victor Verster Prison and the Columbine High School massacre — sailed by miserably for the writer Imraan Coovadia. He was living in the United States at the time and despite graduating with a masters in fine art from Cornell University the decade vanished as he struggled to make a start as a novelist.

“Well, I tried,” Coovadia says, in a deadpan sort of way, “but I was trying to write a novel about a guy who is only marrying the daughters of Nobel laureates.” It was meant to be a satirical novel but for myriad reasons the book just didn’t work. “It was like this really brittle, not really funny satire and stuff … I was at a dead end and I stayed in that dead end as a writer for eight years.”

Since recovering from that prolonged spell of writer’s block, Coovadia (43) has over the past 10 years or so emerged as one of South Africa’s foremost fiction writers. To date he has written five novels — The Wedding, Green-Eyed Thieves, High Low In-between, The Institute of Taxi Poetry and the just published Tales of the Metric System — and won every major literary award in South Africa. He has also published a slender collection of essays, Transformations, and a study on Trinidadian Nobel laureate VS Naipaul, Authority and Authorship in VS Naipaul.

He lives with his wife and six-month-old son in an old Victorian-style house in Oranjezicht. It’s a 10-minute bus ride from Cape Town’s city centre and it’s 4 o’clock on a Friday afternoon, early summer, when I turn up at his gate for our interview.

The mood in the house is festive. Fellow Cape Town writer Damon Galgut and literary critic, Maureen Isaacson, are among the guests seated around the kitchen table.

In person, Coovadia has an engaging intellectual energy and possesses the same razor-sharp wit as some of his most memorable characters — Firoze Peer in Green-Eyed Thieves and Adam Ravens in The Institute of Taxi Poetry. “I’m not that funny anymore,” he says, arms raised in mock lament. “I think the older you get the less sense of humour you have.”

He was born and raised in Durban, the cultural milieu of which he has mined for most of his novels. His family has ancestral roots in India and his father, Professor Hoosen ‘Jerry’ Coovadia, is an internationally acclaimed scientist who has led ground-breaking research in mother-to-child transmission of HIV.

After matriculating from Hilton College, near Pietermaritzburg, Coovadia moved to the United States in the early 1990s. “I went to the US to go to college, planning to be a physicist. I thought it was the one country in the world where people weren’t determined to make other people strangers. When that changed, to summarise a long process, I came to Cape Town, the city in our country with the highest propensity to make strangers out of citizens and friends out of foreigners.”

He started writing fiction when he was in his 20s and by his own admission it was mostly “terrible” stuff. When he finally found his voice it dazzled with comic wizardry, to paraphrase JM Coetzee’s cover blurb for his breakout novel, The Wedding.

In The Green-Eyed Thieves, for example, Firoze Peer, accused of “selling passports to those notorious hijackers” who flew passenger airlines into the twin towers in 2001, makes this declaration to the reader: “The defendant stipulates that he falls in love at the drop of a hat. In four afternoons at court he surrendered his heart to Mrs Velasquez, a fifty-nine-year-old prosecution witness, and then to the court reporter, Irene, whose pea-green eyes flashed in his direction. Like her predecessors, Irene was robust, built big around the hips, and small in her freckled shoulders. It’s a rule of human nature that a fellow like myself, on the lesser side of scrawny, gravitates to a broad on the happier side of voluptuous, if he has any real confidence.”

In recent times, though, Coovadia has adopted a more serious tone in his fiction. His third novel, High Low In-between, won the 2010 Sunday Times fiction prize, and looked at the poisonous years of Aids denialism during Thabo Mbeki’s presidency. His new book, Tales of the Metric System, is a historical novel in the same vein as Chimamanda Ngozi Adichie’s classic, Half of a Yellow Sun.

The book spans four decades of South Africa’s contemporary history beginning in Durban in 1970, the year Coovadia was born. “It sounds like the melodramatic thing writers say but it really took me my whole life [to write this book].”

Literary academic Sarah Nuttall once described South Africa’s history as “so event-laden”. Tales of the Metric System is built around some of these major historical events — the football and rugby world cups, the truth and reconciliation hearings, the arms deal and others — to tell the story of a country as it moves through times of war and peace.

Coovadia’s early fiction, though wickedly funny, tended to confine itself to the Indian-South African experience. Tales of the Metric System, in contrast, marches across geographies and crisscrosses gender, race and class divides. The book encompasses a wide cross section of South African society — from leftist intellectuals in the 1970s to an Aids patient on his deathbed in the early 2000s. And the personalities that have shaped the country’s history in ways both major and minor drift in and out of the narrative. It’s an astonishing feat of imagination.

Reading Coovadia’s book now, at a time when the ANC, once the vanguard of the anti-apartheid struggle, is mired in all sorts of controversies, is not an exercise without poignancy.

Who in the 1970s would have predicted that striking mineworkers would be shot dead by police in a democratic South Africa for demanding a fair wage? Or that 20 years after the 1994 elections the classic song Not Yet Uhuru would still resonate so strongly with the millions of people condemned to live on less than R10 a day?

“Literature is an incredibly important way of telling the truth,” the legendary Zimbabwean publisher Irene Staunton once said. “In fact, I actually think it is more important than history, although, of course, I do not mean that one would want to exclude one for the other.

“In terms, however, of the enormous complexity of different situations: what it felt like to be there, in that situation, what values, what principles came to the fore and why, how these related to individuals and how they embraced, challenged or evaded them, can only come through literature. It does not come through history in the same way, not how it felt to be there, not the confusion of feelings, ideas, emotions, beliefs.”

This is what Coovadia has done with Tales of the Metric System; to capture what it felt like to be there — the confusion of feelings, ideas, emotions and beliefs. It’s his finest novel to date and maybe one that others will read long after our time has passed.

Damon Galgut: ‘If one loves South Africa it has to be a dark kind of love’

Imraan’s words on the move

Writers: Penned in or breaking out?