Life on diamonds is too easy 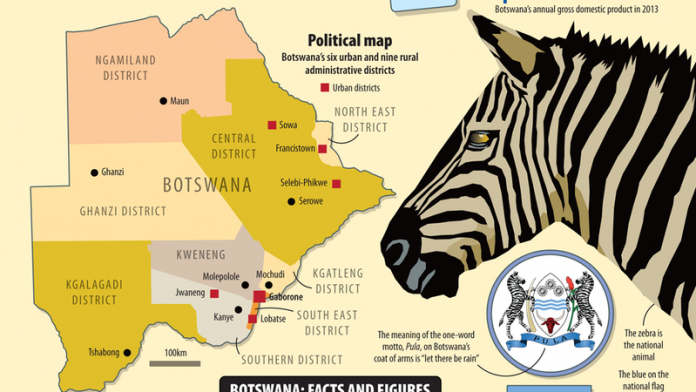 Botswana is a remarkable development turnaround story. But it also shows how difficult it is to wean a country off its dependence on natural resources.

At independence in 1966, it was one of the world’s least developed and poorest nations, with a per capita income of just $70 and the majority of the population was dependent on subsistence agriculture.

There were fewer than 50 university graduates, literacy was low, and there was scant access to health, sanitation, water, telephones, electricity, public transport and other services.

Botswana depended then on British foreign aid, not only to develop but also to survive.

Today, its per capita gross domestic product is more than South Africa’s, at over $14 000 in terms of purchasing power. The reason for this is simple: Botswana learnt quickly how to gain maximum value from its natural resources; in this case diamonds, establishing a productive relationship with the De Beers company.

Predatory regimes
This achievement should not be sniffed at. Africa is awash with examples of how natural resources, when coupled with an absence of good governance, can translate into predatory regimes and civil war.

But Botswana’s impressive success has created other problems. Diamonds account for 35% of its GDP and about 85% of its exports. This keeps the value of the pula up, making exports of any manufactured goods a challenge.

As much of the rest of the economy depends on this industry, Botswana’s dependence on diamonds is almost total. This has not been lost on successive governments.

In 2005, a colleague and I assembled a group of international specialists at the invitation of the Botswana government to devise a strategy for economic diversification. This was a great opportunity to work in a country that had done all the hard work.

Atypical of much of our work in the continent, this project did not involve recovering from a traumatic period of collapse. The foundation of diamonds was already in place; the 40th anniversary of independence in 2006 offered a symbolic opportunity to take this to the next level.

Out of these preliminary discussions emerged the Botswana Economic Advisory Committee (BEAC) to oversee this strategy. Not much has happened since. In part, this may be down to not having the right people on the committee; in part because of bad timing, given the temporary collapse of the diamond market in 2009; but in part because of something else.

This was not, of course, the first time that Botswana had attempted to diversify, though various efforts have consistently been costly failures.

Low-interest loans
The financial assistance policy, which was terminated in 1999, provided labour and capital subsidies. Very few of the 3 000 operations started under this programme survive. The Citizen Entrepreneurial Development Agency policy that replaced the financial assistance policy offered low-interest loans along with mentoring and support programmes, but met with very limited success.

Instead of creating permanent jobs, these schemes institutionalised inefficiencies and high operating costs, even though, to Botswana’s credit, it closed them down – a rarity in the developing world, given that strong political constituencies usually gather quickly around subsidy programmes.

There has been recent progress on the back of the BEAC’s recommendations in opening a diamond sorting and sales facility. These are possible because Botswana has leverage in determining the fate of diamond beneficiation. Yet other high-profile attempts at industrialisation have collapsed, such as various vehicle assembly plants.

The reason these efforts failed, like the 21st-century endeavour, is largely because of a combination of apathy and wrong choices. Little other than the former explains why the new Chinese-built airport in Gaborone remains only partially completed.

Life on diamonds is too easy. “When they wake up in the morning,” a Costa Rican colleague said, “they know they have only to work half a day since half their income is guaranteed. We on the other hand have to work from the moment we wake up – there is no natural resource dividend.”

There is no constituency in Botswana to stick to the tough road of diversification and global competitiveness, rather than simply rely on its comparative advantages of what’s under its soil – plus its unique tourist offerings in the Okavango.

If it is going to diversify, the first thing Botswana has to do is to reduce the costs of doing business to below that of its nearest and greatest competitor – South Africa.

This does not demand subsidies but a general improvement of the competitive environment. This includes addressing the high value of the pula, one of the effects of natural resource dependency and inflows.

More than anything, however, success at diversification requires making growth and development the central objective of government policy; the issue that every president bangs on about from morning to night, every day, every week, month and year.

Such a laser-sharp focus on development is, after all, what set East Asia on a different trajectory and made it an attractive destination for investors that could have gone anywhere else.

This would make Botswana, poised as it has been for a while on the cusp of a new “second” stage of development, really different in Africa, in developing from assets other than resources.