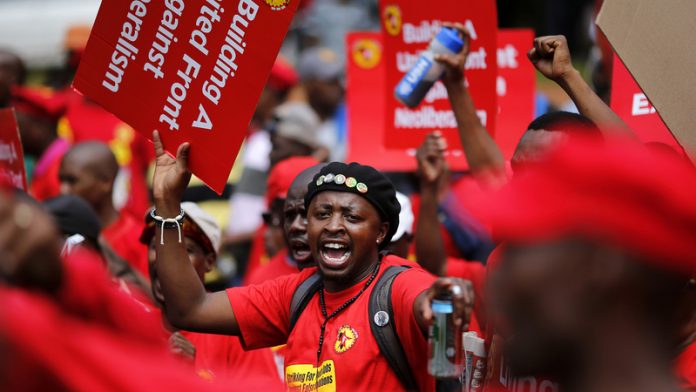 Seven Cosatu affiliates, which supported the National Union of Metalworkers of South Africa (Numsa) despite its expulsion, will suspend their participation in the trade union federation’s decision-making body, the central executive committee (CEC) said on Monday.

“With immediate effect we are suspending our participation and co-operation in Cosatu boardroom/ palace politics,” Food and Allied Workers Union (Fawu) general secretary Katishi Masemola told reporters in Johannesburg on behalf of the unions.

Cosatu’s CEC was made up of general secretaries and presidents of affiliates and the trade union federation’s national office bearers. This was part of the unions’ campaign to reclaim Cosatu, he said.

Expulsion
Numsa was expelled from Cosatu during a special CEC meeting, which ran into the early hours of Saturday morning. During the meeting Numsa presented its argument to Cosatu on why it should not be expelled, but this did not stop its ousting by 33 votes to 24.

Masemola said the unions would each call for national executive and central executive committees to discuss the crisis in Cosatu and reaffirm their mandates on the way forward.

The meetings would be held in the next two to three weeks. “We are renewing our calls for a special national congress, believing it to be the only way of dealing with the degeneration of the federation…”

‘Unconstitutional’
He said the unions would mobilise workers around the country to demand that the special national congress be held and would also pursue the matter in court.

Numsa and the seven unions had on numerous occasions called for the congress to be held, but Cosatu dismissed their requests.

Masemola said the unions would also support Numsa and campaign for the reversal of what he called its “unconstitutional” expulsion. “There can be no Cosatu without Numsa.”

The seven unions felt that Numsa had been victimised and treated unfairly by Cosatu’s leadership. – Sapa

Sona 2021: Ramaphosa offers a hope that his own party seeks to destroy