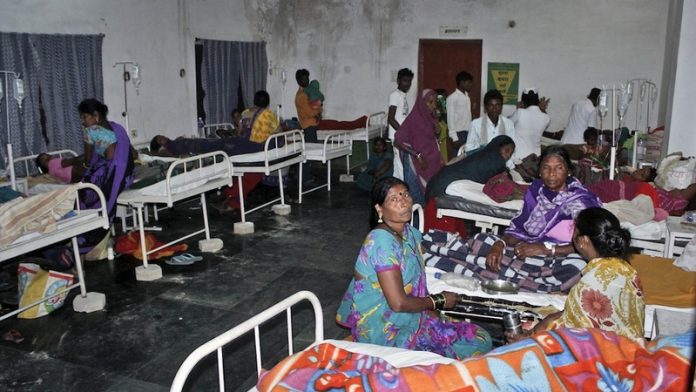 Relatives of the 12 women who died after a state-run mass sterilisation campaign in India went horribly wrong have told local media they were forced by health workers to attend the camp.

More than 80 women underwent surgery for laparoscopic tubectomies at a free government-run camp in the central state of Chhattisgarh on Saturday. About 60 fell ill shortly afterwards, officials said.

“The [health workers] said nothing would happen, it was a minor operation. They herded them like cattle,” Mahesh Suryavanshi, the brother-in-law of one casualty, told the Indian Express newspaper.

Such camps are held regularly across India as part of a long-running effort to control population growth.

Four doctors and officials have been suspended and police have registered a criminal complaint. “It was a serious matter of negligence. It was unfortunate,” said Raman Singh, the chief minister of Chhattisgarh.

Singh said the authorities would investigate the incident, which took place at the disused private Nemi Chand hospital in the Pendari area of Bilaspur, 110km from state capital Raipur.

The operations in Chhattisgarh, one of India’s poorest states, were carried out by a single doctor and his assistant in about five hours.

The exact cause of the deaths was not yet clear but officials said they suspected blood loss and infection caused by unclean surgical equipment. Government guidelines recommending that a surgeon should not use a single instrument for more than 10 operations appear to have been ignored. The women were discharged immediately and given no follow-up care, reports said.

Deaths due to sterilisation are not new in India, where more than four million of the operations were performed in 2013-2014, according to the government. Between 2009 and 2012 the government paid compensation for 568 deaths resulting from sterilisation, the health ministry said in an answer to a parliamentary question two years ago. A total of 1 434 people died from such procedures in India between 2003 and 2012.

“Sterilisation camps” are held in Chhattisgarh between October and February as part of a programme to control India’s population, which stands at 1.26-billion. Women who go through the surgery are given 1 400 rupees ($22) by the state, the amount reportedly paid in this latest case.

One of the suspended medical officers told the local NDTV channel that the camp was set up to meet targets. “April to March there are annual targets – this was done according to that,” the official said.

A second suspended official told the channel the daily target of a team was 40 sterilisations “but the number of operations held on Saturday was double that figure”. Amit Agarwal, the state health minister, denied any targets had been set.

Watered down
Health workers, including doctors, are paid for each operation completed. Medicine in the public health system in India is often badly prepared, with varying dosages, or is out of date. Basics such as disinfectant are in short supply and are watered down to save money. Corruption is rife in the sector.

Local governments in India often offer incentives, such as cars and electrical goods, to women volunteering for sterilisation. Health advocates worry that paying women to undergo sterilisation at family planning camps is dangerous and, by default, limits their contraceptive choices.

“The payment is a form of coercion, especially when you are dealing with marginalised communities,” said Kerry McBroom, director of the Reproductive Rights Initiative at the Human Rights Law Network in New Delhi.

No government has successfully formulated policies to manage India’s population growth, which stands at 1.6% a year, down from a high of about 2.3% in the 1970s.

That decade saw aggressive sterilisation campaigns that have stigmatised family planning ever since. India is forecast to become the world’s most populous country in 2030, with numbers approaching 1.5-billion. India was the first country in the world to introduce a population control policy in the 1950s and has missed successive objectives ever since.

Though large numbers of young people can be an economic advantage, a combination of unfulfilled aspirations, scarce land and water, overcrowding in growing cities as well as inadequate infrastructure could lead to social tensions and political instability.

One problem is a gender imbalance, a result of selective abortion of girls. In some communities there are fewer than eight women for every 10 men, with the ratio skewed even further among younger people. – © Guardian News & Media 2014