Historical moment as Rosetta spacecraft touches down on comet 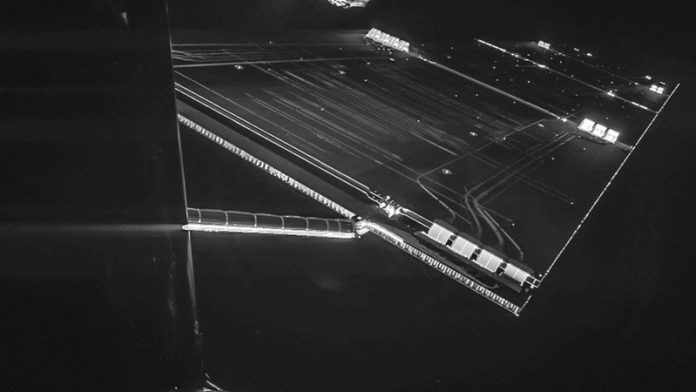 The signal – on touchdown – broke a seven-hour wait of agonising intensity and sparked scenes of jubilation at the European Space Agency’s (ESA) mission control in Darmstadt.

From its orbit around the comet, the Rosetta probe will take more high resolution images and gather information on the body’s density, temperature and chemical make-up.

The team in charge of the Rosetta mission had achieved what at times seemed an impossible task, by landing a robotic spacecraft on a comet for the first time in history.

The safe landing gives scientists a unique chance to ride a comet and study from the surface what happens as its activity ramps up, as it gets closer to the sun.

The feat marks a profound success for the ESA, which launched the Rosetta spacecraft more than 10 years ago from its Kourou spaceport in French Guiana. Since blasting off in March 2004, Rosetta and its lander, Philae, have travelled more than six billion kilometres to catch up with the comet, which orbits the sun at speeds of up to 135 000km/h.

The moment the tension broke came shortly after 4pm GMT, when Philae called home. “We are there. We are sitting on the surface. Philae is talking to us,” said a jubilant Stephan Ulamec, Philae lander manager at the German Aerospace Center (DLR). “We are on the comet.”

Early data from the lander revealed that it had had a very soft landing on the comet. There was initially confusion about Philae’s twin harpoons, which are intended to secure it in place. About an hour after the landing signal came through, Paolo Ferri, the ESA’s head of mission operations, confirmed that the harpoons did fire, but it was not clear whether they had penetrated the surface, raising fears about the lander’s stability and chances of clinging on to the comet for long.

Touchdown for the lander played out 510‑million kilometres from Earth, between the orbits of Mars and Jupiter, on a comet hurtling through space at more than 18km a second. At so vast a distance, even radio signals travelling at the speed of light take nearly half an hour to travel from Earth to the spacecraft, making real-time control of the landing impossible. Instead, the entire descent was precalculated, uploaded and run automatically.

Unlocking the mysteries of comets
The $1.58-billion mission, named after the Rosetta stone that enabled scholars to decipher the language of ancient Egypt, aims to unlock the mysteries of comets made from material predating the birth of the solar system. In the data Rosetta and Philae gather, researchers hope to find answers to questions of how the solar system formed, and whether comets carried water and even complex organic molecules to planets, preparing the stage for life on Earth.

Landing Philae on the comet’s surface was never going to be easy. When ESA managers got their first close-up of the comet in July, its unusual rubber duck shape left some fearing that a safe touchdown was impossible. The shape was not the only problem. The comet’s surface was hostile; hills and spectacular jutting cliffs gave way to cratered plains strewn with boulders. If Philae landed on anything other than even ground, it could topple over, leaving it stranded and defunct.

Rosetta spent weeks flying around the comet to create a surface map from which mission controllers could choose a landing site. They faced a trade-off: the site had to be fairly flat and clear of boulders, but with a good view of the whole comet and plenty of sunlight to charge the lander’s batteries. From a shortlist of five potential landing spots, scientists and engineers unanimously voted for a one square kilometre region on the comet’s “head”, later named Agilkia.

At the start of the mission, ESA officials had assumed the comet would be potato shaped and rated their chances of a successful landing at 75%. After seeing the shape and terrain of their target close up, those odds fell to about 50%, but climbed again as technical staff learned more about the landing site.

The confidence did not last long, though. On Tuesday night, hours before Philae left its mother ship, the chances of a safe landing took another dip. Overnight, a thruster on the lander failed to respond to commands sent from Earth. Engineers tried for hours to correct the fault to no avail.

The malfunction threatened to abort the mission, but at 2.35am GMT on Wednesday, mission controllers decided to go ahead with the landing regardless.

The nitrogen thruster, facing upwards from the top of the lander, was designed to fire for 60 seconds as Philae touched down, to prevent it from bouncing off the comet’s surface, where the gravitational pull is several hundred thousand times weaker than on Earth.

For the mission team, the seven-hour descent, during which Philae fell at walking speed towards the comet’s surface, was a nail-biting experience. The lander separated from its mother ship at 8.35am GMT, with confirmation received on Earth at 9.03am. For the early part of the 20km descent, Philae was expected to be out of contact with Rosetta. At about 11am GMT, the mother ship received a signal from the lander, which duly unfurled its legs and began to take pictures.

The first image, taken just 50 seconds after separation, revealed a look back at the mother ship, one of its 14m-long solar arrays clearly visible, as Philae fell silently to its destination. One hour from touchdown, Philae was on the right course. The DLR’s Ulamec said everything looked “fantastic”. Telemetry from the lander showed that it was rotating, but not enough to cause problems.

Equipped for the job
From its orbit around the comet, the Rosetta probe will take more high-resolution images and gather information on the body’s density, temperature and chemical make-up. It will also capture dust and gas released in ever more violent jets from the comet’s nucleus, as it nears the sun.

From its vantage point on the surface, the lander can drill down 20cm and collect samples of subsurface material for on-the-spot testing. On board Philae are 10 instruments, including one from the Open University named Ptolemy, which will bake pieces of comet material and analyse the gases given off to build up a picture of the comet’s composition.

Another instrument, the Comet Nucleus Sounding Experiment by Radiowave Transmission (Consert), will reveal the comet’s internal structure by passing radio waves through the icy body to Rosetta on the other side. The Rosetta mission is planned to run until December 2015, but if enough fuel remains in the spacecraft’s tanks, mission controllers may extend its life by six months, and give the mother ship more high-risk tasks, such as flying through one of the gas and dust jets streaming from the comet.

Philae has initial battery power to last 40 hours but will then switch to rechargeable ones replenished by sunlight. The lander could continue working until March next year, when the electronics will become too warm to work properly. Even when Philae packs up, it may still cling on to the comet, perhaps for several 6.45 year-long laps around the sun, before enough material erodes from the comet’s surface for the lander to lose its grip. – The Guardian

The pandemic has caused 50 000 businesses in the sector to temporarily close, putting 600 000 jobs at risk
Read more
Education