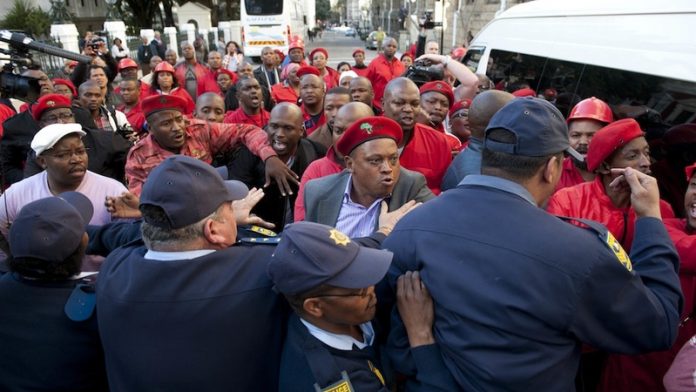 There is nothing obvious about the fracas that members of the Economic Freedom Fighters (EFF) are causing in Parliament. Anybody who argues the contrary is lying – regardless of whether they agree with the EFF that it is about freedom of speech and dress, or with the ANC, which maintains it is about basic parliamentary civility, or with the Democratic Alliance, which always manages to take that crucial political selfie with the most visible underdog at the right time.

Worst are those who constantly negotiate our political landscape with help of the compass of analogy: “The ANC government, through its forced-removal politics and the militarisation of the police (and the everyday) is just like the apartheid regime” – an analogy that simmers restlessly under the reminder that this is the first time since 1966 that police have entered Parliament.

Critique by analogy is annoying, not just because it is intellectually lazy but also because it amounts to a profound disregard for the most fundamental constituent element of politics – that it occurs in time.

Politics, like everything else, takes place in time and in a context. It derives its meaning from that, not facile ahistorical analogies.

Fact is, every repetition of a crime is a different crime altogether, and our first task is to understand the difference.

If we emphasise the sameness of the crime, we limit our political responsibility to saying things like “Barack Obama is just as bad as George W Bush” or “the ANC is just as bad as the National Party government”, whereas, given the time and the context of their crimes, the former are often much worse than the latter.

In short, the problem with analogies is that they promise answers without making us work for them. They are little more than wilful inversions that want to be deconstructions when they grow up. Let’s try to think through this parliamentary fiasco by accusing the ANC of something more interesting: a profound lack of historical awareness.

In a liberal democracy like ours, we separate out those who make the rules, those who interpret what they mean, and those tasked with enforcing them. This seems obvious, but it’s complicated when we look at Parliament, the space where rules are made. Where, in this space, are the rules made about the process we need to follow when rules are made – the second-order rules that regulate the process of making first-order rules?

The power of these conventions lies in their origin, for they have none. True, substantial conventions evolve over time until they come to embody what Montesquieu called “the spirit of law”, that obscure and cumulative thing that makes us behave in a certain way without us quite understating how it came to be that we behave in that way.

Enter the dragon we all like to quote but none like to face: history. The spirit of rule-making is not a function of a decision to imitate a pre-existing model, but of a commitment to time and history – to being historical, to doing and being our own thing, to allow such parliamentary conventions that belong to us to evolve over time.

What does that mean in real terms? Simply that, whereas rules can be enforced, conventions cannot. In fact, it is precisely on the question of their enforcement (or not) that rules and conventions are diametrically opposed. Rules without the power to enforce them amount to nothing. Conventions enforced amount to the worst form of mimicry.

So the question we have to put to the ANC is this: What fundamental misunderstanding lies at the root of the confusion of the two? What makes the ANC believe it can enforce conventions with the same mechanism needed to enforce rules, that is, pure force?

The answer is simple: a profound disregard for history and the historical process required for democratic, parliamentary conventions to be established through dialogue, trust, and a mutual commitment to democratic process – in short, all those difficult things that may or may not, over time, result in the kind of parliamentary conventions that, in their own subtle way, act as limitation of power.

This, of course, generates a further question: Why the disregard for time and historicity? Again, the answer is simple: for its deliverance of political rights, the ANC piggybacked on the support of those who either took black identity really seriously (black consciousness) or those who took economic freedom seriously in some way – the South African Communist Party, Cosatu and the spectre that has come to haunt their Faustian compromise, the EFF.

The ANC’s major concern has been with identity politics, with showing that despite colonialist stereotypes we are, in fact, civilised Africans. And we all know what that means: civilised Africans don’t use the middle finger, they dress properly and, above all, they apologise when they’re told to.

Given the ANC’s historical commitment to identity politics, this is the irony of ironies.

The equally identity-driven critique of the post-1994 ANC as just another elite-driven neopatrimonial state has exhausted itself in the less glamorous realisation that it increasingly appears as custodian. Custodian of another poor imitation of a European bourgeois revolution, playing itself out in yet another unimaginative corner of the world, where a bourgeois pretence of decorum and good manners is thinly veiled by African-humanist claims made with reference to that most troublesome trope of our political discourse, dignity.

Leonhard Praeg teaches politics at Rhodes University. His book, A Report on Ubuntu, was published this year by UKZN Press