Pigs don’t oink oink, but you do 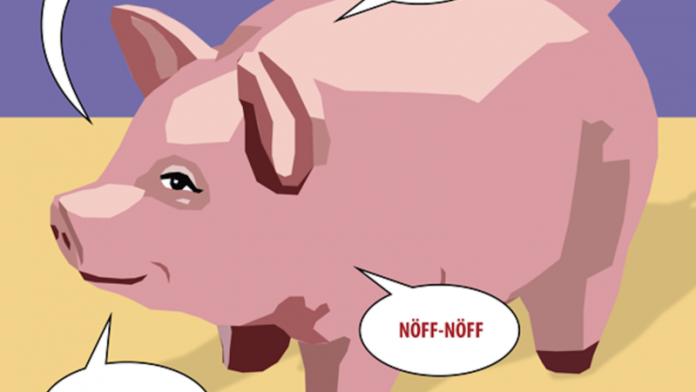 What goes boo boo in Japanese, chrum chrum in Polish, groin groin in French and nöff-nöff in Swedish?

Clue: she may go by the name of Peppa, or demand to be called Miss. She is, of course, the pig who oinks in English, Italian and Spanish.

In case you were wondering, it isn’t pigs that are multilingual, it’s us. The onomatopoeia we apply to animal sounds varies delightfully around the world. This diversity reflects the unique flavour and panache of different languages. It’s one of the many joys of exploring the linguistic quirks of other tongues.

Just try, for example, not to smirk when you discover that dogs bau bau in Italian and guf guf in Spanish. Or that the sound for cows begins with ‘m’ in every language where records exist except Urdu, where they baeh, and Dutch, where they boo. Similarly, Japanese is the only language in which a cat mewing doesn’t begin with ‘m’. Instead, cats go nyan nyan.

Linguists widely dispute the origins of language. The Bow Wow theory, however (attributed by historical linguist Max Müller to German philosopher Johann Gottfried Herder), proposes that language all started with the perceived parroting of these animal moans, cries, grunts, whines, snorts and coos.

Panjabi cockerel
Despite this, there are only a handful of research studies into international animal onomatopoeia. One of these is the almost impossibly cute Quack Project, which asked children in London’s multilingual schools to make the sounds that they perceive animals to make. The result is a series of audio sounds that vividly demonstrates how differently we imitate the sounds of animals across different languages. My personal favourite is the Panjabi cockerel (although the enthusiasm of the delivery means you may want to listen on half volume).

In another fascinating and fun study, Professor Derek Abbott from the University of Adelaide produces one of the most extensive pieces of research into this topic. His research focuses on what we’d write in the cartoon bubble for these creatures.

Abbott explained that we’re still understanding why these sounds express themselves in different ways in different languages. Although there’s much variation, there’s also uniformity with many sounds, which seems equally interesting. It’s an area of “academic neglect”, according to Abbott, who cites the fact that “formal dictionaries traditionally excluded these types of words” as evidence that they were perhaps seen as too childish or frivolous to be addressed in serious studies.

According to his study – a work in progress that, he says, is still in its early stages – the two sounds made by the same animal that are most different by country are that of the bumblebee. In every language except one, the bee’s famous buzz is represented by a “z” or an “s”. In Japanese, however, a bee makes the noise boon boon. “It’s remarkable there’s no ‘z’ in there at all. Of all the sounds I’ve collected, that surprises me the most,” Abbott says.

Another surprise to Abbott was the quirkiness of the English onomatopoeia: “The English honk for a goose and gobble gobble for a turkey are rather odd in comparison to other languages (they glou glou in French and Greek and glu glu in Turkish).

“Also for a generic large bird we say squawk – but when interviewing people from other countries I usually get a blank stare when I ask them if they have an equivalent to squawk.” The English cock-a-doodle-doo of the rooster does seem the most peculiar when compared with the Dutch kukeleku, German kikeriki and Hungarian kukuriku.

What’s revealed by some of these sounds says as much about cultural differences as linguistic ones. “In English we have rather more sound words for dogs (woof, yap, bow wow, ruff, growl) than in any other language, as English-speaking countries tend to have the highest dog ownership per capita. There are also clear differences when you look at how the same language is used across difference geographies and environments.

“In Australia, camels have been introduced in the outback and so we have grumph. Unsurprisingly, I haven’t come across any sound for a camel in the US or UK. Similarly, in mainland Spain there is clou clou for a male turkey, but in Mexico they say goro-goro-goro,” says Abbot.

A study by Karlstads University investigated how these sounds sometimes move away from animal phonetics, as it were, and towards symbolism. Its theorises that our onomatopoeic sounds for teeny, light animals include more vowels from the beginning of the alphabet to symbolise higher tones (small birds cheep cheep or tweet in English, pip pip in Swedish and Danish, and tziff tziff in Hebrew). Larger cumbersome animals meanwhile include more vowels from later in the alphabet to symbolise lower tones (a large dog woof woofs in English, hov hovs in Turkish and bow bows in Urdu).

Multilingual onomatopoeia is very human – it says far less about the animals than it does about us. When you consider we’re hearing the exact same sound but producing different representations of that sound, it reveals how malleable we’ve made our different tongues. Exploring these sounds makes us see the familiar and juvenile with renewed, fresh intrigue as adults.

And to that, I say evviva in Italian, valio in Lithuanian, mabuhay in Filipino, or simply hurrah in English. – © Guardian News & Media 2014

Technology is not necessarily the panacea it’s said to be, de-skilling further the under-skilled
Read more
Education

On the power of language

Although English may not be the de facto talk of the town in South Africa, in written form it continues to dwarf others
Read more
Advertising