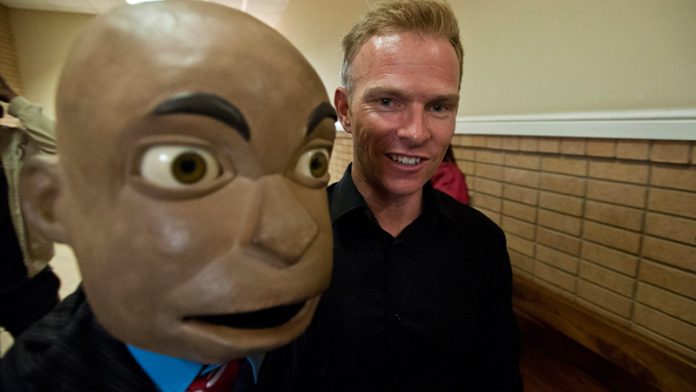 Singer Steve Hofmeyr’s attempt to have his interim protection order against comedian and ventriloquist Conrad Koch made permanent was dismissed with costs in the Randburg Magistrates Court on Thursday.

Magistrate Naren Sewnarain found that Steve Hofmeyr had used his position as an artist and entertainer to publicise a statement on Twitter, which, although not part of his original application, was of such a nature that it led the respondent in the matter [Koch] to view him as a racist.

The magistrate said Hofmeyr was, in effect, “seeking an order to advance views that lend themselves to racism and advance the imposition of the apartheid regime”.

In a link prefaced by the statement “This is why we do what we do”, Hofmeyr posted an article espousing racist views on social media, after he had sought the order against Koch.

In court, Koch, the hand behind Chester Missing, faced off against academic  and staunch rightwinger Daniel Roodt, as opposed to Steve Hofmeyr, the applicant in the matter.

Hofmeyr was in Cape Town, a slightly hunched and gaunt Roodt explained, performing at the Afrikaans is Groot concert. “I’m a friend of his, and it is my idea that we stop [Conrad] Koch in his tracks from causing him further harm.”

The “harm” Roodt referred to was Koch’s “civil campaign” against Hofmeyr, sparked by his tweet, “Sorry to offend but in my books, blacks are the architects of apartheid. Go figure.”

These were followed by a barrage of tweets by Koch, from his puppet Chester Missing’s account, including one recounted by Roodt, which read: “By the time I’m finished with you, even your dog will think you’re a cunt.”

Koch also tweeted companies endorsing Hofmeyr, such as Land Rover and Pick n Pay, tweeting, “Will you ban Steve Hofmeyr from appearing at your future events?”, in reference to the Afrikaans is Groot festival, which the two companies are sponsoring.

Hofmeyr’s tweets only offended ‘white leftists’
On November 5, Hofmeyr secured an interim protection order against Koch in the Randburg Magistrates Court. The order prevented Koch from threatening, harassing or making defamatory statements against Hofmeyr. It also prevented Koch from tagging Hofmeyr on social media and mentioning him on television or radio.

Koch is seeking to have the interim court order set aside with costs.

In attempting to defend Hofmeyr’s “apartheid denialism” as Koch calls it, Roodt argued that Hofmeyr had lost in the form of concert cancellations and the withdrawal of sponsorships. He also argued that tweets in which Koch called Hofmeyr stupid were motivated by “an elitist Anglophone white perspective against the Afrikaners” to propagate the view that “Afrikaners are less intelligent than English speakers.”

Roodt also defended Hofmeyr’s “architects of apartheid” tweet, saying that former “Bantustan leaders” and even black police officers supported apartheid “wholeheartedly”. Defending accusations of Hofmeyr’s racism, he said, “Hofmeyr’s tweets caused almost immediate hysteria in the ranks of the leftist English commentators. If it offended anyone, it was not black people but white leftists who took it to be heretical … He has freedom of speech, and there is academic research which we can refer to to look … at how they [black people] participated in the formation of apartheid.”

He called his friend Hofmeyr a “moderate who is not given to preaching violence or harassing people, he is concerned about Afrikaans being marginalised and opposes extremists and challenges that through freedom of speech.”

Roodt, an academic, was denied his request to cross-examine Koch as there were no factual disputes in the matter.

Koch’s legal representative Steve Budlender said the interim protection order amounted to preventing Koch from publicly responding and criticising Hofmeyr, who fashioned himself as a “political activist”. He argued that Hoymeyr believed that the Harrassment Act meant that “he could make racist comments and prevent others from stopping him” from doing so.

“Of course Koch’s statements are defamatory, but they are not unlawful,” he said.

He went into Hofmeyr’s long history of “racist statements” before saying, “We’re calling for him to be held accountable [so that he knows] that he can’t make these statements with impunity”.

He called Koch’s actions a “civil campaign that was not harassment but a legitimate exercise in freedom of expression – one of the tactics people has used against apartheid and people were now using against Israel.” – Mail & Guardian