Jazz supergroup lights up the scene 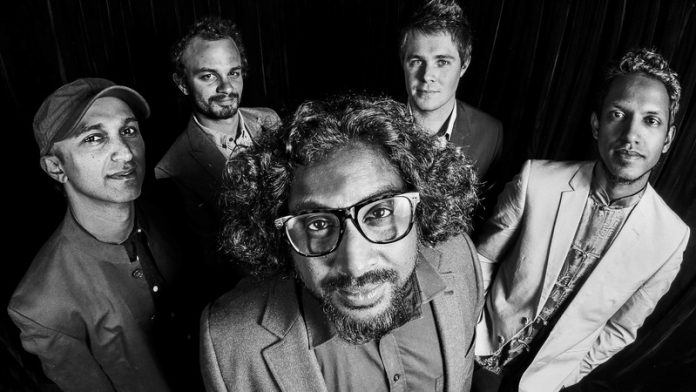 Scullery Department swings hard, but not simply to the old-time American jazz vocabulary the band is schooled in. Nor are the note-packed solos merely makeovers of Charlie Parker’s American bebop blueprint. The Jazz Epistles’ music may harness bebop’s fast and furious structures, but it swings with an unmistakably African style embedded in the loping rhythms and lilting melodies of township marabi.

October 2014: Straight No Chaser, Cape Town. Days before their breakthrough performance at Carnegie Hall in New York, Kesivan and the Lights are running through the repertoire of their new album, Brotherhood.

Eclipse swings seriously, but not to your average American hard-bop heroism. Kesivan and the Lights run a different voodoo down, decoding the sonic DNA of ancient Indian classical ragas and Afrobeaten grooves into the very heart of their jazz improvisation. It’s majestic playing, mind-blowing listening. It’s the birth of a new South African jazz sound taking shape.

Emotional honesty
Five decades separate these two bands. In that time, jazz has changed. South Africa has changed. Although short-lived, thanks to the international success of several of their members, the Epistles went on to become canonised as the country’s first jazz supergroup. The freedom of expression – that Revolution in Four-Part Harmony – these musicians sought for in music was finally achieved in 1994.

Since democracy, South African jazz has become less about political struggle and more about lifestyle pursuit. But the revolutionary impetus of the Jazz Epistles lives on in Kesivan and the Lights.

“We may not be in the same struggle as our forefathers, but it doesn’t mean that the struggle doesn’t continue,” says Naidoo. “We’re not complacent. Each one of us in the band knows we have to take this music further. We’re very conscious of it. We’re always asking, ‘how are we moving our music forward?’?”

Much like the Jazz Epistles before them, for Naidoo and the Lights the answer began by stepping out of the comfort zone of their American jazz training to explore improvisational traditions closer to home. Khota and Naidoo first primed their passion for the melodic and rhythmic methodologies of Indian classical ragas with Cooper in their progressive Indo-African fusion combo Babu. “In Indian classical music, they think about music as a whole,” Naidoo says. “There’s no difference between harmony, melody, rhythm and dance.”

Frustrated by the scalar straightjacket of the Western tonal system, Naidoo started wondering how he could construct complexities in his own compositions using this more holistic approach to rhythm and melody. It was by taking a pit stop at a Lagos pub while touring Nigeria with Babu a few years back that he heard the answer.

“There was this 15-piece band playing highlife deluxe,” he says. “It was really amazing. The music just didn’t stop. They had this groove and it would just go and go and go. Even when one of the musicians was in the toilet they wouldn’t stop playing. One of the three lead singers was actually in the toilet at the same time as me and he was still singing. The groove was incredible.”

The episode reminded Naidoo of just how crucial the groove is “to the way we write, feel and experience music” in Africa. “It’s all in there,” Khota adds enigmatically. The quietest member of the Lights, he prefers to let his guitar do the talking. Hearing Khota searching for a segue between the rhythm and the melody, by modulating his solos into ecstatic micromodal improvisations on lengthy 10-minute plus compositions such as Eclipse, Contact and Freedom’s Dance, is nothing short of sublime. Watching his Adam’s apple gyrate onstage as he literally breathes the changes adds a whole new level of intensity to the music.

“Every time we play we really try and reach a new high. It’s highly intense and very intensive the concentration,” Shepherd says. “You do all this homework, research and practice every single day, you’re all basically working up to that moment which is the concert performance, you know?”

“Even though you’re sometimes searching for something and you get it, I also like the process of finding it,” Khota says. “It’s not just about capturing ‘yes, we found it’, it’s more like capturing the struggle to get there.”

Naidoo nods. “It is the sense of searching that’s the real struggle, you know? Whenever we play we’re struggling with our instruments to try and bring what’s inside out.”

It’s this struggle for unfettered feeling that takes flight on a composition like Time with the Master. A homage to saxophonist-pianist, composer and mentor Bheki Mseleku’s spiritual philosophy of self-knowledge, the modal raga hymn testifies to the band’s own quest for emotional honesty.

“If something’s got emotional content, for me that’s beautiful,” Naidoo says simply. “This music is actually really about the struggle to try and make contact with everybody and touch them somewhere.”

It’s also another lengthy composition, clocking in at over 13 minutes.

“Sometimes it takes a piece a long time to get to that place where as a musician you’re really letting go of what you know and you’re just playing what the song demands,” Naidoo says.

Cooper nods, returning to the simple melody at the conceptual core of Brotherhood. “At the foundation every­body respects each other’s space in the music. We know how to give each other space.”

Naidoo grins. “It’s like you’re witnessing telepathy. And through all the bullshit that we’re exposed to in life today, telepathy is one of those things you can’t lie about; it’s inter-soul communication.”

He pauses, before seizing the opportunity to resolve the cadence. “Improvisation is one of the gateways to get there. Being present in that moment right there and then, it’s almost an acknowledgement that we’re all alive together. There are moments when everyone’s feeling in this state of ecstasy. And that’s great, that gets captured on record sometimes, you know? I think that this album has many, many, many of those moments.”

Considering the wealth of talent in the band, one wonders whether this brotherhood will hold, or whether, like the Epistles, its members will go on to become superstars in their own right. Shepherd, Cooper and Naidoo – all former Standard Bank Young Jazz Artist award-winners – already lead fantastic jazz combos themselves, as do Khota and Feya Faku.

Regardless, for the moment Kesivan and the Lights are South Africa’s great jazz supergroup. Their album Brotherhood is a landmark recording that reflects on both the history of this country’s jazz tradition and looks forward to imagine its more global, pan-African future.

Miles Keylock is a music writer, entrepreneur and co-owner of several businesses including Straight No Chaser with Kesivan Naidoo.