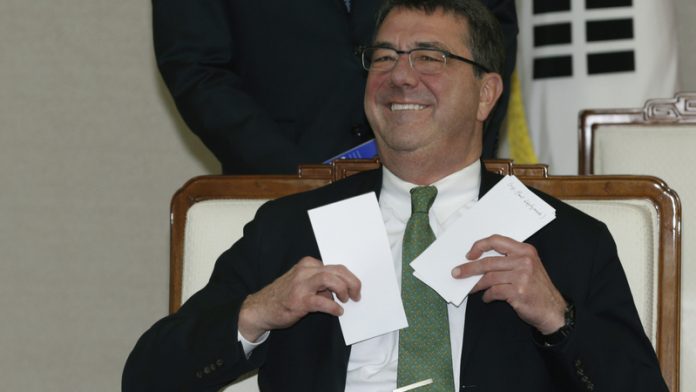 Ashton Carter, a veteran Washington insider President Barack Obama is expected to name as his new defence secretary, built a reputation as a behind-the-scenes team player during many years in senior Pentagon posts.

But scrutiny of the 60-year-old former physicist’s views on issues ranging from North Korea and Iraq to defence spending also show an independent thinker whose opinions have not always aligned fully with those of the president.

If Obama chooses him, as expected in the next few days, there is little reason to believe this would impede his nomination. Some of the Republicans who will control Congress when he comes up for confirmation in January have already expressed their support – even before he is formally nominated.

Carter, who has a deep knowledge of the Pentagon’s inner workings and especially of weapons procurement, would bring technocratic efficiency to the top defence job at a time when Washington is grappling with an array of global crises.

But his biggest challenge may be to achieve something that outgoing Defence Secretary Chuck Hagel failed to accomplish: penetrate the inner circle of Obama national security advisers where policymaking is concentrated.

Carter is known for being outspoken behind closed doors and more cautious in public – but he has not always held his tongue.

“He’s not a reed in the wind,” said Andrew Hunter, a former Carter aide now at the Center for Strategic and International Studies think tank. “He’s a problem solver, and he’s about getting the job done. And he’s absolutely willing to take the heat for a tough call.”

Views not always in sync
Carter set out one of his more controversial positions in a Washington Post op-ed in 2006 with former Defence Secretary William Perry, while both were out of government. They argued for a preemptive strike on a North Korean intercontinental ballistic missile if plans proceeded for a test launch.

Such a direct threat of military action ran counter to former president George Bush’s approach at the time, and is not in harmony with Obama’s cautious handling of often-tense dealings with Pyongyang or the president’s broader reluctance to use US force abroad.

As the No 2 official at the Pentagon, Carter also joined with then-defence secretary Leon Panetta in a push to keep a small US troop presence in Iraq after 2011, Panetta wrote in his memoir Worthy Fights.

Panetta said Obama’s failure to play an active role in the negotiations allowed a deal to slip away. Many critics say the lack of a residual US force was one of the reasons Islamic State fighters were able to seize large parts of Iraq this year.

Carter was also a fierce critic of across-the-board budget cuts that hit the Pentagon in 2011 under a “sequestration” deal between Obama and congressional Republicans.

He has called the automatic cuts “an embarrassment” and “a disgrace” and something that should never have been implemented.

Carter has a history of scrapping weapons programmes considered wasteful, but he is widely expected to press for increased spending in some defence areas once in office.

Before completing his last Pentagon stint as deputy secretary at the end of 2013, Carter began sounding the alarm about the military’s eroding competitive edge, and he is expected to champion an effort launched by Hagel to invest in new cutting-edge technologies.

Carter was an early critic of Ronald Reagan’s “Star Wars” initiative in the 1980s meant to shield the United States from the Soviet missile threat, and he played a key role at the end of the Cold War in reducing the US and Russian arsenals. – Reuters

US retaliates against Russian interference with 2016 election