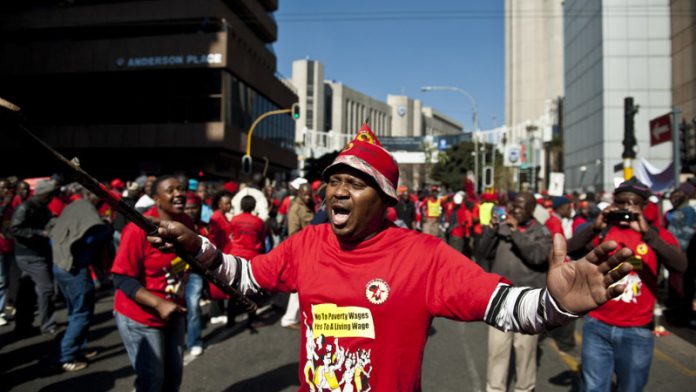 In its latest Quarterly Bulletin, the bank said the annualised real economic growth rate picked up to 1.4% in the third quarter of 2014, as the effects of the five-month-long platinum strike in the first half of the year started to dissipate.

However, this strike was followed by industrial action in the steel and engineering subsector of manufacturing.

“This lasted one month, involved 220 000 employees, and contributed to the manufacturing sector registering a third successive quarter of negative real growth.”

It also spilled over to the real output of the electricity-producing sector, which contracted for a second successive quarter.

“Taking account of the direct and indirect effects, it is estimated that in the absence of the industrial action in the manufacturing sector, the growth rate of the overall economy in the third quarter would have been 3.1%.”

On inflation, it noted this had returned to within the target range in September. “While most measures of underlying inflation also seem to have stabilised more recently, the inflation expectations of business and trade union representatives have continued to exceed 6%, although by a fairly slight margin.”

Real gross domestic spending had regained some momentum in the third quarter.

“Growth in real final consumption expenditure by households inched higher over the period, aligned with a slight acceleration in real disposable income.”

Purchases of durable goods had picked up.

“Expenditure on semi-durable goods also registered a firm increase, whereas spending on non-durable goods and services was subdued.” A near-record maize crop had given agriculture a boost, while the construction sector grew more moderately.

“In the third quarter, agricultural sector output was bolstered by a near-record maize crop. Mining output rose marginally over the period, while activity in the construction sector continued to expand, albeit at a moderate pace.”

Boost
Capital spending had turned around in the third quarter and inched higher. “While moderate increases in capital expenditure were registered by private businesses in the agricultural, mining, manufacturing, and transport and communication sectors, the most significant boost came from a recovery in real outlays by Eskom and Transnet.”

Exports declined over the period.

Trade deficit
However, the drop in the price of crude oil had improved terms of trade. “In value terms, the deficit on the trade account narrowed somewhat in the third quarter of 2014. This was partly offset by a widening in the deficit on the services, income and current transfer account, reflecting higher net interest payments to non-residents and higher net payments for transport-related services.”

The smaller trade deficit, but larger services and income shortfall, had culminated in a slightly narrower deficit on the current account. “It edged lower from 6.3% of gross domestic product in the second quarter, to 6.0% in the third quarter.”

On employment, the bank said this reflected the generally subdued growth in economic activity, with the unemployment rate as estimated by household surveys remaining marginally above 25%.

On the real estate market, the bank said turnover and house prices had risen through the year, and the average time properties remained on the market before being sold had shortened somewhat. “Growth in mortgage advances also inched higher.” – Sapa