A serpent lurks in the garden of plurality 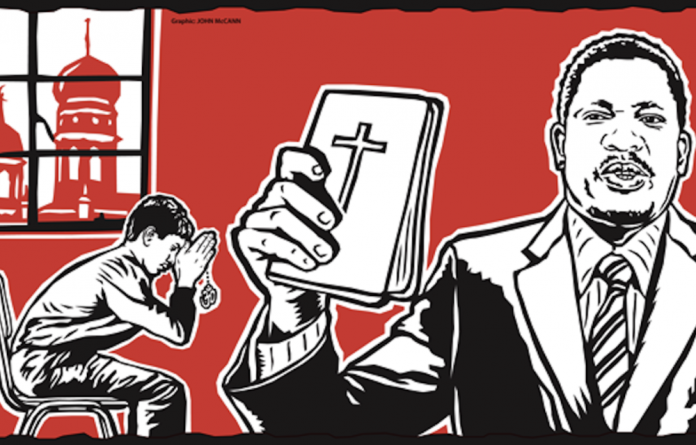 The Constitution strikes a delicate balance between our right to believe – or not believe – in whichever god(s) we choose to. Unlike many other countries’ constitutions, it neither creates a rigid separation between religions and state institutions nor does it create a state religion.

This measured approach, which is typical of our reconciliatory Constitution, is a clear acknowledgment of the diverse array of belief systems followed and religions practiced in South Africa. The Constitution also requires that those who accept office in our government actively “promote” all the rights in the Bill of Rights and reflect its values in all their activities.

Despite this, because the vast majority of South Africans attest to a wide range of religious views in the Christian tradition, South African politicians have become renowned for using Christian metaphors in attempts to garner public support.

President Jacob Zuma himself has claimed that the “ANC will rule until Jesus returns”, and connected Christian salvation to voting for the ANC – “when you vote for the ANC, you are also choosing to go to heaven” – implying that those who do not vote ANC will be condemned to hell.

Though these comments are met with approval by some Christians, Kenneth Meshoe, leader of the African Christian Democratic Party, like many others, has labelled these comments as “hypocritical”, indicating that Zuma only “runs to churches to get votes”.

Last week Beeld reported an excerpt from a speech given by Gauteng MEC for education Panyaza Lesufi. He acknowledged that “each school has the right to practice [any] religious activity, so long as it’s not harmful”, but his comments were far from neutral on the question of promotion of religions in schools – and, particularly, which specific religion should be promoted.

Lesufi said he was “opening schools up to preachers”; that “85% of South Africans are Christian” and, “as I last understood the Constitution, it was the majority that won”.

If Bibles are available in hotel rooms, he asked, why are they not available in schools? He claimed that in his first 100 days in office he had “distributed 50 000 Bibles to schools”.

Whether Zuma and the long list of Christian members of government, such as Lesufi, are good Christians, bad Christians, hypocrites or heathens is beside the point from a constitutional perspective.

The Constitution does not require either the president or the chief justice – a proud Christian and a pastor in his own church – to abandon their religious beliefs.

It does, however, require them to appreciate and respect the diversity of beliefs reflected by our country, and it asks them to place the Constitution’s rights- and values-based approach above their own beliefs when they are acting in their government capacities.

Many religious people see constitutional and religious values as in harmony, not conflict. The chief justice himself considers it as part of his responsibility, as a Christian, to uphold his oath as a guardian of the Constitution.

Whatever the theological merit of this position, it is not acceptable for government officials to create the impression that the state favours one religion over another, regardless of how widely supported that religion may be.

Yet the constant outpouring of Christian metaphors, motivations – and, in the case of Lesufi, texts – by senior government officials creates this impression.

It marginalises people of other faiths and spiritualities, as well as agnostics and atheists, and reasonably suggests that Christian morality will explicitly or implicitly find favour and seep into our laws, policies, judicial decisions and educational programmes.

Lesufi’s actions are of particular concern because they are inconsistent with both the Constitution and the department of basic education’s National Policy on Religion and Education. The Constitution allows for religious observances to take place at state institutions such as schools, provided that they follow the law, are conducted on an equitable basis and, importantly, that attendance at them is “free and voluntary”.

This is echoed in the department’s policy, which endorses and encourages objective religious instruction in schools; its goal is “unity in diversity”, and it encourages “equitable practice of religious observances at school”. The policy explicitly clarifies the idea that neither the Constitution nor the policy itself seek to streamline or change pupils’ religious beliefs, but only provide a platform for pupils to understand each others’ religions, and a space in which to practice their own religions freely and voluntarily.

Contrary to Lesufi’s comments, in a constitutional democracy it is not the majority that wins: it is the diverse plurality.

The Constitution is the supreme law of the land and the rights of both minorities and majorities must adhere to the values and rights enshrined in it. The rights in the Bill of Rights clearly trump majority opinion, whether on questions of faith or any other matter.

This is echoed by the department of education’s policy, which places learning about constitutional rights and values side by side with learning about religions. It requires teachers to empower pupils with knowledge about “the principles and practices of the main religions of South Africa, the customs, values, and beliefs of the main cultures of South Africa, the Constitution, and the Bill of Rights”.

Lesufi’s understanding of the Constitution and his department’s policies are therefore questionable. His zeal to deliver the religious texts of one religion to schools contrasts particularly strongly with the government’s consistent failure to deliver copies of the Constitution – and to participate adequately in constitutional education programmes for pupils and the public at large.

The most recently available information is that the department of justice and correctional services, the major government producer of copies of the Constitution, will only print a paltry 11 000 copies in the 2014-15 financial year, for a population of nearly 54-million people.

The importance of a pluralist, constitutionally informed approach to religion is magnified in schools: pupils are still forming their own personal identities and determining what they want to believe or disbelieve. All pupils, regardless of family and community background, have the right to adhere to both secular and religious belief systems and moral codes. Schools, as centres of learning, should be open spaces in which a plurality of religious views can be expressed and understood.

Particular caution is required to avoid disproportionate support for dominant religions such as Christianity.

A good start would be a commitment by Lesufi to ensure that, instead of Christian Bibles, his department puts 50 000 copies of the Constitution in the hands of pupils in Gauteng, in their own variety of home languages, in the next 100 days of his office.