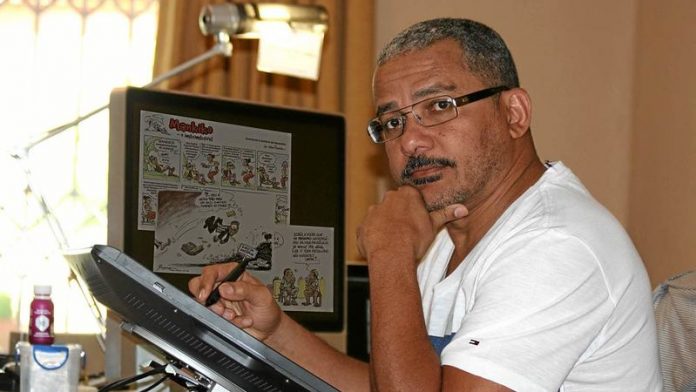 Cartoonist Sérgio Piçarra has been entertaining Angolans with his satirical observations on life and politics for more than two decades and he is most famous for his comic strips on a work-shy, beer-loving character called Man’kiko.

But now, thanks to social media, which have allowed his cartoons to be shared widely and well beyond the limited print run of private weekly newspapers, the 45-year-old’s work is reaching new and younger audiences who are hungry for his alternative views in a country where freedom of expression is severely limited.

His fans refer to him as the “Angolan Zapiro” and praise his ability to weave clever humour into his sharp political commentary, providing light relief while posing important questions about society and those in charge.

“Humour is a very subtle way to talk about politics,” explained Angolan writer and academic António Tomás, a Ray Pahl Fellow at the African Centre for Cities at University Cape Town.

“It does make some people feel uncomfortable, and of course there are people who do not like to be laughed at, but I think this is also a way of creating some political awareness, to make us laugh at our politicians and our system, and things like corruption.

“There is almost a photographic quality to his work,” he added.

“People say one image is worth a thousand words and I think this is the special character of Sérgio’s work. He can give you an image that is so powerful because it says so much.”

Reginaldo Silva, a veteran Angolan journalist and radio commentator, said Piçarro’s cartoons were popular because they were quick to absorb, unlike long newspaper articles, and they played an important role in the country’s political debate.

“With the circulation of his cartoons on the internet, I think that his importance is growing,” he said. “Angolan journalism needs more people who have the artistic and communicative capacity of Sérgio Piçarra.”

Unlike many of the authority figures he depicts, Piçarra is softly spoken and modest about his achievements. He says he merely draws what he sees going on around him.

“Things happen, I read about them, I talk to people, I get ideas … just simple observations of reality,” he told the Mail & Guardian. “Sometimes it takes me hours to create something; other times just one minute. It depends.

“As a cartoonist, I see things in a certain way and have ideas about society,” he said.

“I can’t stay indifferent to a social phenomenon happening around me. When serious things happen, I cannot sit in silence.”

Angola has ensured Piçarra has plenty of material

Rising dissatisfaction
Although the country – sub-Saharan Africa’s third-largest economy thanks to oil – likes to portray itself as an “African Rising” success story because of its impressive post-war growth, dissatisfaction is fermenting.

Despite the large amounts of oil money pouring into state coffers, many millions live in slum conditions with limited access to water, electricity, education and healthcare.

This grinding poverty – and the fact the country has some of the world’s worst social indicators – jars with the luxurious lifestyles of the political elite.

There are widespread allegations of corruption and abuse of power.

President José Eduardo dos Santos – who has been in power for 35 years and is Africa’s second-longest serving leader behind Equatorial Guinea’s Teodoro Obiang Nguema Mbasogo – has become a target for frustrated youth who have staged mini protests to call for his resignation.

These demonstrations (which, though small in size, are significant for a country where few dare to challenge the authorities because of years of Marxist-style repression), along with the heavy-handed response of the Angolan authorities, have featured in several of Piçarra’s more recent works.

In one piece he shows a young man painting the slogans “Fora!” (Get out!) and “Abaixo” (Down with) on a wall.

A policeman and a portly businessman look on, fondly reminiscing about how, as youths, they themselves had stood up to the colonial regime and brought independence to the country.

But in the next frame, their mood changes and the policeman sets after the youth, wielding his baton, while the businessman shouts insults.

As well as confronting the theme of alleged neocolonialism among today’s African leaders, the cartoon makes a subtle reference to the death last year of Manuel de Carvalho, known as Ganga.

The engineer, who was a member of Angola’s second-largest opposition party, Convergência Ampla de Salvação de Angola-Coligação Eleitoral, had been putting up posters advertising a demonstration calling for answers about two activists who went missing and were later confirmed to have been killed by security agents.

Ganga’s death in custody, and the disappearance of Isaías Cassule and António Alves Kamulingue, have drawn widespread condemnation from international rights groups and have rocked Angolan society.

“I am not a civil activist,” said Piçarra, who splits his time between Luanda and Cape Town, where his children are studying.

“But I do work that contributes to the defence of rights and expression. We should all be defenders of our rights if we want a fairer society.”

He said: “Sérgio has always defied the established norm. He is one of my Angolan heroes.”

Marques, who is due to stand trial in Luanda next week for his reports that senior-ranked generals close to President dos Santos committed alleged “crimes against humanity” in the country’s diamond mines, added that his favourite Piçarra cartoon was never published.

“It was a boxing match between President dos Santos and the late rebel leader Jonas Savimbi … [but] … it was censored,” he said, explaining that the drawing only made it as far as the wall of the state-owned daily newspaper Jornal de Angola, from whose employ Piçarra was later discharged.

Tomás also praised Piçarra for his courage. “There are other people doing cartoons, but I don’t know anyone who is taking so much risk in denouncing and taking on these very difficult issues,” he said.

“In this regard Sérgio is very special and he is doing very important work for democracy and freedom of speech in Angola.”

Piçarra acknowledged that, in a country where media is heavily controlled by both state and private actors, he had to tread a fine line to ensure his work was still publishable.

“There are many times I have ideas that I don’t draw because I know that no one will publish them,” he said, adding that he wants to set up his own website to be able to self-publish, but had found it difficult to attract sponsorship because of, he believed, the political nature of his cartoons.

Playing down the comparison between himself and Zapiro, Piçarra says: “I like Zapiro’s work very much but I am very jealous of him for several reasons. First, for his creativity, second, for his courage, and third, for the fact that he operates in a country where there is a very different social context and a lot more openness.”

Last week Piçarra’s long-running contract with weekly Luanda newspaper Novo Jornal was terminated, but for now you can still find his political cartoons and his narrative comic strips at www.redeangola.info

Louise Redvers lived and worked in Angola between 2008 and 2013 and was the correspondent there for the BBC and AFP. Twitter: @LouiseRedvers