Numsa’s Front: United only in opposition 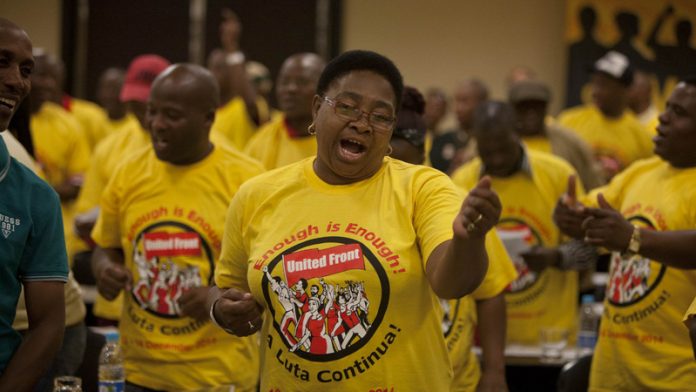 It started off strong, because in any group with even mild leanings towards the left it is a song everyone knows by heart.

“My mother was a kitchen girl,” sang National Union of Metalworkers of SA (Numsa) deputy general-secretary Karl Cloete on Saturday morning, and the 200-odd people in the room, there to work towards the formation of the United Front, were with him.

“My father was a garden boy,” continued Cloete, and again the crowd followed enthusiastically.

But it was not to last.

‘I’m a socialist’
“That’s why I’m a communist,” led Cloete from the podium, and suddenly there was confusion. Some people just mumbled incoherently when they reached the contentious part, others fell silent, glancing at their neighbours.

By the second repeat most had opted to go with “that’s why I’m a socialist”, and by the third verse Cloete, despite commanding the microphone and resolutely clinging to “communist”, was overpowered by socialists apparently not quite ready to declare themselves communists.

Disagreements
The nascent United Front, Numsa’s initiative to create an umbrella that is neither political party nor trade union, spent Saturday and Sunday locked in a Johannesburg airport hotel trying to define itself. By the end of the weekend, however, and despite sometimes heated debate, the meeting had not agreed whether the United Front would be socialist – nor even what, exactly, socialism is.

Other areas where delegates agreed to disagree, at least for the time being, is on whether or not the United Front should be regional, or continental, or just South African, how it should be structured, whether or not only individuals or only organisations can become members, and whether or not it should ever get directly involved in any way in elections.

Membership should be open to all who share the (yet-to-be-defined) vision of the United Front, the meeting agreed, but definitely not to “the bourgeoisie”. Unfortunately, there was no agreement on what, exactly, would constitute being bourgeois, and whether or not the bourgeoisie includes the likes of taxi drivers, taxi owners or informal traders.

Consensus
Notwithstanding such rather fundamental disagreement, the mood was self-congratulatory. “There is sufficient consensus,” Cloete declared to nods and claps.

That consensus, especially where strongest, seemed to consist almost entirely of a long list of things and people the United Front is not, or is against.

What the United Front is not
The United Front is not patient, Numsa president Andrew Chirwa said. “We are told we must suspend our hunger, our poverty, until 2030, when Vision 2030 is reached … We’re told to be patient … but we don’t see patience from some of our leaders … we see a rush to loot resources.”

The United Front is not sympathetic to the opposition politics of the Democratic Alliance, said activist Zackie Achmat, best known for his work with the Treatment Action Campaign (TAC). “If you don’t watch out, Helen Zille will rule here,” Achmat warned, referring to the province of Gauteng. “The DA is coming, and not in a good way.”

And the United Front, though sympathetic to the struggle of the Economic Freedom Fighters to speak its mind in Parliament, is not some “shortcut to Parliament”, Chirwa said, in one of many sly references to the EFF.

The United Front is not a group that will seek to rescue the ANC or the SA Communist Party (SACP), said Numsa general secretary Irvin Jim, because those organisations are already lost. Neither champion socialism, and the entire ruling alliance is now “anti working-class” that has seen “a once proud people reduced to begging from the state” for social grants.

If anything does unite the United Front, it is loathing of the Tripartite Alliance  – and its leaders. Though Jacob Zuma was rarely mentioned by name, the many jokes about Nkandla were met with universal applause. Insults directed at SACP leader Blade Nzimande (“rotten”), Cosatu president Sdumo Dlamini (“run, Sdumo, run!”) and deputy President Cyril Ramaphosa (“the Buffalo Breeder”) drew laughs even on their umpteenth repetition.

Ambitions
Loathing of the ANC and its alliance, however, is not in itself a course of action. In its struggle against neo-liberalism, the meeting seemed to concur, it would be fighting on many fronts.

And the breadth of its ambitions are breathtaking. A sampling of some of the projects, problems and issues the United Front possibly intends tackling include:

To tackle those issues, the meeting agreed, the United Front must capture the public imagination. But how it should do so was not immediately clear. Some argued strongly for a campaign called The South Africa Want, based on a process of gathering demands “from below” via a process similar to the way the Freedom Charter was created.

But others argued that it would be better to focus on an “iconic community”, such as Marikana, or to organise a “Day of Action”, or to picket the national budget presentation in Parliament to air objections to state spending priorities.

The decision on which of those plans, if any, are to be implemented, was deferred.

We’ve tried leftism for long enough and what we have to show for it is corruption and mismanagement, when what we need is jobs and education. Is it time to try out a Mashaba-esque version of right-wing politics?
Read more
Business

South Africa’s steel producer’s earnings dropped in the first quarter of 2020 because of low demand and a lacklustre economy, exacerbated by the Covid-19 lockdown
Read more
Coronavirus

Covid-19 exposes the continued inability of white South Africa to critically reflect on their positionality or engage in meaningful, self-reflective, and constructive debate
Read more
Coronavirus