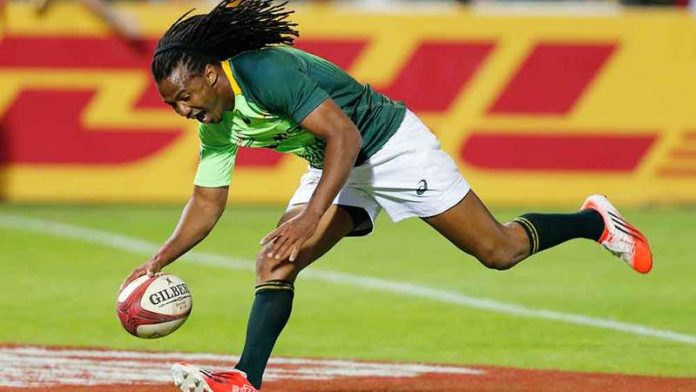 South Africa defended their title on home soil by beating current Series holders New Zealand 26-17 in an enthralling final of the third round of the world sevens circuit on Sunday.

Canada were victorious in the Bowl final, beating Kenya 24-5, and Portugal took home the Shield after a shock 19-14 win over Samoa. In the final, speedster Sherwin Stowers slid in for New Zealand’s first try after a mistake by the home side. The Boks hit back through a stepping Phil Snyman, playmaker Cecil Afrika crossing for his 112th try for the Blitzbokke soon after to hand South Africa a seven-point lead.

On the hooter, Afrika was shown yellow, and the Kiwis hit back to 12-10 after Joe Webber finished in the corner. Seabelo Senatla, outstanding all weekend, scorched 50 metres for a try to open the scoring in the second period, Branco du Preez nailing a fine conversion.

Webber then stepped inside and out to keep things more than tense with five minutes left. But then Senatla, Afrika, Kwagga Smith and Werner Kok were all involved before Smith was fed a brilliant pass to cross with 90 seconds left. “It was an awesome game of rugby and physical to the death,” said South Africa skipper Kyle Brown. “You couldn’t ask for anything more than to fight to victory on home soil.”

One of the outstanding performances of the weekend was undoubtedly that by the Americans, whose scalping of Fiji is a good sign with all sides battling for qualification for the Rio Olymics in 2016. Internet sprinting rugby player sensation Carlin Isles opened the scoring for the USA against the Fijians, teammate Andrew Durutalo doubling the score soon after.

The South Sea islanders hit back through a brace from Savenaca Rawaca and Vatemo Ravouvou to level matters. But the last word lay with Perry Baker, whose kick chase was rewarded with a kind bounce that let him in for a try and a historic win for a nation many believe could be the sleeping giants of rugby. – Sapa