Russians go shopping in the race against rouble’s fall 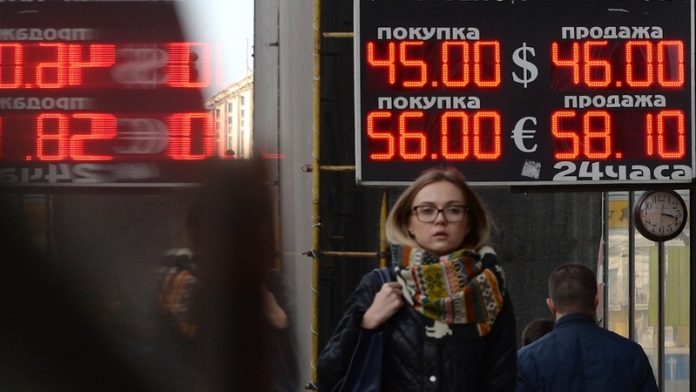 “It’s safest to keep all your money in roubles,” runs a Russian joke currently doing the rounds. “After all, nobody is going to think to look for real money inside a bag made of roubles.”

As Russia’s currency continued its downward spiral this week, many Moscovites watching their savings shrivel vented their frustration with black humour. Others had another solution: shopping. At the Yevropeisky mall, prices were on the rise. Yekaterina, an employee at a home appliance store, was taking an inventory of prices, which she said had been changing each day. “Everything in here is European made. You can figure the rest out yourself.”

But the prices are not rising as rapidly as the value of the rouble is falling. Moscow is suddenly one of the cheapest places in the world to buy Apple products, or many cars, and some people are taking every last rouble to invest it in resaleable goods.

Olya, an artist looking at earrings in a jewellery shop, said her family had changed their savings into euros two years ago. Nonetheless, the rouble crisis was “horrible”, she said. “We live in Russia, we get our wages in roubles.”

But there was a sense of stoicism and very little panic. “They have just erected a Christmas tree and loudspeakers outside my building,” said a Moscow-based Western banker. “It’s so surreal: I can hear this happy upbeat music and New Year songs while I’m assessing the damage at my desk.”

He said he had personally lost money after investing in shares in the Russian lender Sberbank, which lost more than 18% of their value on Tuesday.

Feeling the heat
Those with more modest amounts of capital were also feeling the heat. At a Moscow branch of Sberbank, engineer Andrei Matrosov said he was considering buying a car, an apartment or financial securities. “You need to hold foreign currency; that’s what the analysts recommend,” Matrosov said. “It’s not understood where the bottom will be.”

He had wanted to take a trip to Europe, but instead will be going to his hometown in the Urals. He said the company where he worked, which services equipment for fuel and energy companies, was cutting 5% of its staff and began issuing two-month dismissal notices in November. “They said there wouldn’t be any pay raises this year and, judging by the forecast, it’s not worth hoping for one next year either.”

Although the hope is that a weak rouble could stimulate local production, small business owners who work with imported goods have been particularly hard hit. After Russia banned the import of dairy products from the European Union in August, Alexander Krupetskov, the owner of a cheese shop, began buying from Switzerland. On Tuesday, his suppliers suspended sales because of the pricing turmoil.

Lyudmila Gorbachyova, a pensioner, said she didn’t have any savings to worry about, but complained that her 12 000-rouble monthly income was being stretched thinner and thinner.

“I’m looking around for what to buy my grandkids for New Year, but everything is so expensive; prices are rising everywhere,” she said. “When we were growing up, we were poor but happy. Now there’s no happiness anywhere.” – © Guardian News & Media