Is this the heart of redness? 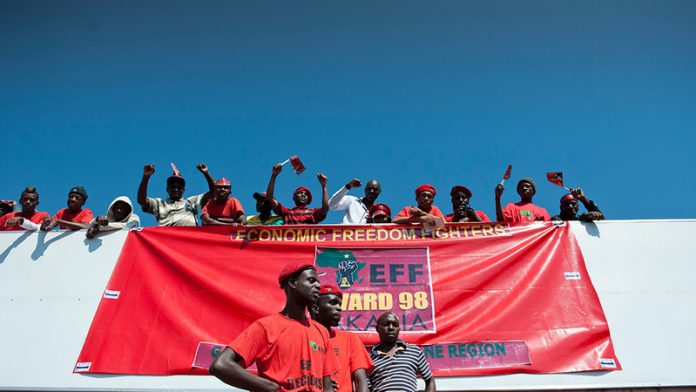 Park that Beemer for a mo and triple check, no, make that 10 checks, to see if your heart is really deepest red.

1. The clothes
The Economic Freedom Fighters (EFF) may have appropriated the colour red and brought it into Parliament, but the deputy minister in the presidency, Buti Manamela, a former comrade of EFF commander-in-chief Julius Malema, once accused the EFF crowd of hiding Breitling watches and Gucci shoes under those red overalls.

When he was still running the ANC Youth League, Malema’s ostentations, which included fancy clothes and watches, Range Rovers, an Aston Martin and mansions in Limpopo and Sandton, were allegedly financed by a variety of faceless “donors” and apparently his proximity to Limpopo’s then porous tender system. This is while Malema continuously portrayed himself to be a “poor public servant”.

2. The cars
If it’s not a love of bling accessories, the upper echelons of the Red Berets have a penchant for expensive German cars they can apparently ill afford.

In January last year, EFF deputy president Floyd Shivambu made the tabloids for dropping calls or falling silent on Wesbank-hired repo men. They were calling about his R2-million arrears for a fleet including a BMW 730D, a 116i Beemer and a Land Rover. A previous vehicle, a 5 Series BMW, was rumoured to be financed by a former business associate.

3. Policy
Goal number 11 in the EFF’s election manifesto was to: “Ensure that public representatives are advocates and avid users of public services.”

Now that the EFF is two-dozen strong in parly, did we really expect our man in the Aviators and the ill-fitting red onesie to lead by example?

He was in typically fine form when forced to offer a riposte on the shifting goalposts: “We are saying we are ready to abandon these benefits, we are not here for benefits but for as long as they are there, we will use them because there has been allocation for such.”

4. Mines
The EFF’s call to nationalise mines without expropriation dates back pretty much to Malema’s first term as youth league president. The fact that Bridget Radebe (a mining magnate married to minister Jeff Radebe and a sister to mining tycoon Patrice Motsepe) and Tokyo Sexwale were pretty much the only ones supporting this call then raises eyebrows about the real motives for it.

Since the EFF still favours a state-owned model rather than fully-fledged workers control, one can only guess that this is in fact a bailout to the hands that feed them.

5. Democracy
The way the EFF has employed its stated internal practice of democratic centralism has again revived the criticism of the party as a personal fiefdom of its “vanguard”.

The stunt at the EFF’s Mangaung national people’s assembly last month by land and agrarian reform commissar Andile Mngxitama, whose “revolutionary consciousness” would not let him accept a top-six position from the allegedly fixed election process, made him the butt of jokes in the movement.

6. Jargon
From the verbose positioning as “Marxist-Leninist-Fanonian”, run by “the commissars”, its “national people’s assembly”, and by appropriating the transplanted slogan “Asijiki [we do not turn back]”, the EFF knows that this type of jargon is good for the imagination of its supporters.

In reality, the one thing the commander-in-chief has over his counterparts on the left is knowing that his followers do not want to hear any noise about just how the EFF plans to go about its proposed plans to nationalise mines from “white monopoly capital”. Slogans will suffice for now.

7. International swagger
For all its pretences at being an internationalist movement, Malema’s international friends, at least the ones in party colours, are drawn only from Namibia, Botswana and Zimbabwe. The Namibian version of the party failed to win a seat in that country’s recent national elections, winning just 0.36% of the vote.

People continue to wonder about the source of the EFF’s funding and conspiratorialists still whisper, er, conspiratorially about Malema’s visit to TB Joshua’s Synagogue Church of All Nations in Nigeria. Do the EFF’s moneybags perhaps possess that international swing?

Malema, seeing the thought bubbles above the head of Dinga Sikwebu, a member of the front’s national working committee, let out a belly laugh at the EFF national people’s assembly in Mangaung last month and said: “The United Front must just join the EFF. We are the only movement with a clear programme of what needs to happen. They must stop what they are doing because they are not sure if they are forming a nongovernmental organisation or a political party. We in the EFF … are not a non-governmental organisation; we are a political fraternity. That’s where we should fight the battle for economic freedom.”

If you were wondering how to characterise Malema as a leftie, just remember that these are the same words he had for the far-left Workers and Socialist Party.

9. Gender
From bashing women on behalf of his then ANC chief Jacob Zuma, arguing that the woman Zuma was accused of raping could not have been raped because she asked for “breakfast and taxi money” in the morning, to calling a fellow parliamentarian a “straatmeid”, the commander-in-chief of the EFF has failed to lead by example when it comes to gender equality.

The EFF women have been portrayed as a team that has simply disappeared behind the large personalities (and waistlines) of their more outspoken male counterparts, according to the party’s enemies.

It is of little surprise then to discover that it has been the men, namely the newly elected general secretary Godrich Gardee and Malema who have publicly spoken about the formation of the women and youth commands.

So far the distribution of sanitary pads to women who cannot afford them has topped the agenda, along with a healthy obsession with the ANC Women’s League’s panties: Gardee said all the league could do was “to throw panties” – a reference to a recent incident where members of the league in Limpopo put panties on their heads to protest against the ANC provincial secretary Nocks Seabi, whom they accused of pushing a close ally for one of the top positions in the league.

10. Environment
If its election manifesto is anything to go by, the EFF is not much of a green party. While it has called for a move away from coal-based energy on the one hand, it has also advocated the energy-intensive process of desalination as a possible solution to the country’s water woes.

The health and education commission at the party’s national people’s assembly suggested that the EFF should look at fighting for the legalisation of medical marijuana, suggesting the party could have some serious Dr Green Thumbs among the sea of red.

Now if only we could move the discussion in the direction of using hemp for future RDP houses.

Mapisa-Nqakula elected as speaker of parliament