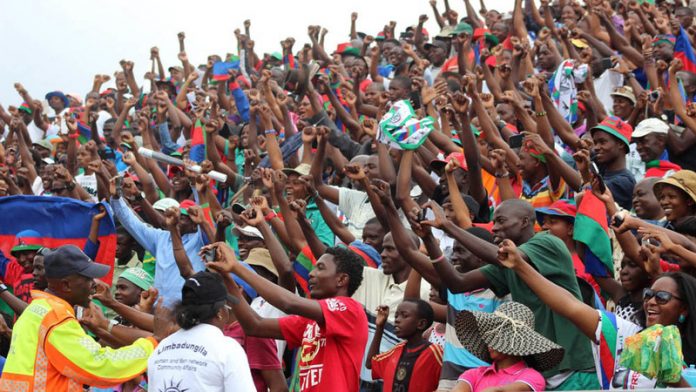 Swapo’s landslide win is not what it seems

I was unsure whether to laugh or cry about the admiration expressed by an ANC national executive committee member about Swapo’s increased votes in the recent elections (“Gwede Mantashe admits ANC could lose power“).

At first glance, the outcome of the general elections represents a great victory for Swapo, which improved its votes from 74% (2009) to 80%, the highest it has ever got.

But Swapo’s increasing popularity does not make sense in a situation of ever-worsening socioeconomic conditions and massive corruption. How should this contradiction be understood?

For the first time, the country used electronic voting machines (EVMs), but it still took three days to announce the poll results of 900 000 voters. And the outcome was impossible to verify, as the EVMs, which have been rejected by several countries, leave no paper trail, and the corroborating process conducted by the Electoral Commission of Namibia has not been disclosed.

The EVMs experienced many technical problems during the elections, and mobile polling stations did not show up at 77 sites. Adding to the intrigue, the co-ordinator of the electoral commission’s information technology is the chairperson of a Swapo branch in Windhoek.

All this casts serious doubts about the credibility of the elections. And, against the background of the 2009 elections, when there was strong suspicion of ballot stuffing, question marks will continue to hang over these election outcomes.

Nonetheless, the electoral triumph only temporarily conceals an organic crisis in Swapo, which was fracturing before the balloting. Owing to intense factional enmity, especially between the older and younger generations over access to state resources, about half of the members picked at the Swapo electoral college were relatively unknown youths, and those from the old guard were shoved far down the parliamentary list. All four candidates of the foremost trade union federation, the National Union of Namibian Workers, did not make it on to the parliamentary list, which reveals the comprehensive loss of power by the trade union movement, which is in an alliance with Swapo.

Then again, Swapo’s landslide win not only ensures that many of the older cadres retain their parliamentary seats but also maintains, for now, some level of harmony in that political party.

The rival organisations cannot match Swapo’s resources and its total dominance of the national ­television channel and radio stations, from which most Namibians obtain their information. Besides having unfettered access to state assets, the Swapo leadership has terminated television and radio programmes that are too critical of the party.

So, the substantial business interests of the Namibian army, highlighted in the excellent article by Ndanki Kahiurika and Shinovene Immanuel (“Army’s untouchable business wing“) and the construction of five new military bases reflect the fear of military rule in Namibia. – Shaun Whittaker, Windhoek

What happened to the SA Dream?

What is the South African Dream? This question exercised our minds as an informal group that met on Saturday at a friend’s place in King William’s Town. We knew of the American Dream and thought that we were entitled to have one too.

Use your vote to end the blight of corruption

The 2014 edition of the annual survey of perceptions of public sector corruption in nations, published by Transparency International, indicates that most African countries are perceived to suffer from endemic corruption. The worst are Somalia, Sudan, South Sudan, Libya and Eritrea. The least corrupt is Botswana, ranked at 31 out of a total of 175 counties. South Africa has edged up in the index to 67th place, an improvement on 69th and 72nd in previous years.

But the marginal improvement is cold comfort because, at 67th place, we are keeping company with Kuwait, Brazil and Bulgaria.

It is trite to submit that corruption, although not endemic in the public sector, is widespread and contributing to inefficiency, maladministration and lack of service delivery.

We dare not be complacent about corruption because the incidence of this cancer does not appear to be diminishing. At best it is being contained.

We should, however, not be defeatist. What is required is a different mindset in both the public and private sectors. This demands integrity of leadership of an exceptional kind, which demonstrates by deed and word that government and administration is conducted honestly and transparently.

This is a message that the electorate of South Africa has to convey in the 2016 local government elections to the political leadership.

South Africans, having crafted an exemplary Constitution, need to take action against the predations of those in the body politic and private sector who are corrupt. In this way poverty, unemployment and economic inequality could be ameliorated significantly and we could become a caring and compassionate society, thereby fulfilling an important legacy of Nelson Mandela. – George Devenish, Durban

After 18 months under administration, the loss-making airline has been cleared for takeoff
Education