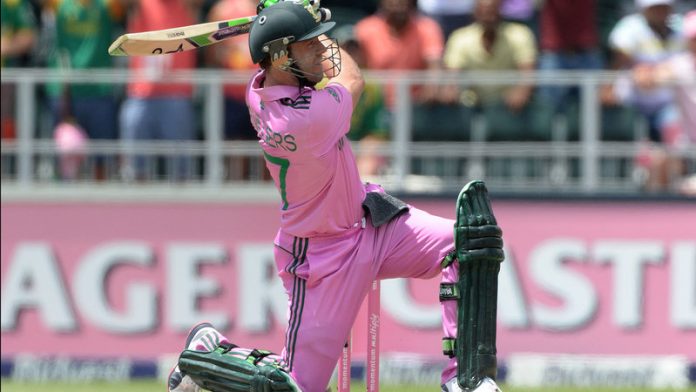 AB de Villiers scored the fastest-ever One Day International century as he led South Africa to a 148-run victory over the West Indies in the second ODI at the Wanderers on Sunday.

The Proteas posted the second highest total ever in ODIs with 439 for two in their 50 overs, and the West Indies could only manage 291 for seven in their reply.

De Villiers was at his extravagant best as he bludgeoned his way to 104 from 31 balls to beat the previous fastest century record by five balls – held by New Zealand’s Corey Anderson set in January last year also against the West Indies.

Regarded as the world’s best batsman, De Villiers showed exactly why he held that label with an unparalleled masterclass display of outrageous strokeplay, including 16 sixes and nine fours in an unforgettable knock at the Bullring. De Villiers was finally out for 149 from 44 balls in his explosive 59-minute stay at the crease.

In his innings, the Proteas captain also broke the record for the fastest fifty in ODIs as he reached his half-century from 16 balls. The previous record was held by Sri Lankan Sanath Jayasuriya, who scored 50 off 17 balls against Pakistan, in Singapore, in 1996.

Andre Russell finally picked up the scalp of De Villiers with two balls remaining in the innings.

While De Villiers stole the headlines in South Africa’s innings, his feats could not have been achieved without centuries coming from openers Hashim Amla and Rilee Rossouw as they laid a platform for the massive total. Together the pair put on a record first-wicket partnership for South Africa of 247 from 235 balls.

Amla ended unbeaten on 153 from 142 balls, with 14 fours in his innings while Rossouw scored his maiden ODI ton before he departed for 128 from 115 balls. The left-hander struck 11 fours and two sixes.

The curtain came down on the highest opening stand for the Proteas, when Rossouw chipped a Sulieman Benn delivery straight to Jerome Taylor to be dismissed for 128.

In total, Rossouw faced 115 balls, striking 11 fours and two sixes. The South African effort with the willow also marked the only occasion in ODIs where the first three batsmen all made centuries.

Set 440 to win, the West Indies did not stand a chance and despite contributions of 64 from 65 from Dwayne Smith and Denesh Ramdin’s 55-ball knock of 57, the visitors were unable to mount a serious challenge at the highly-unlikely victory target.

Dale Steyn was the best bowler on a pitch much better-suited to batting, with a miserly 1/29 in his 10 overs.