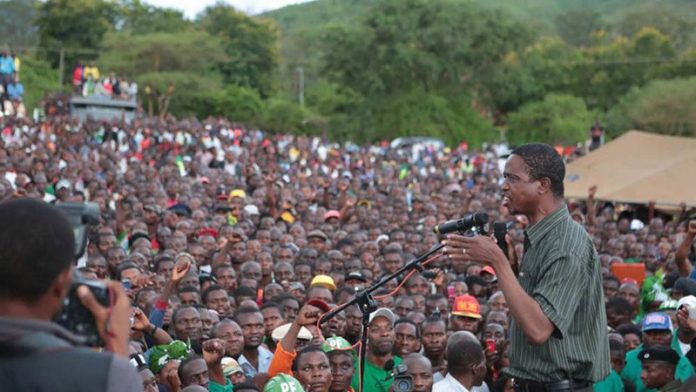 Zambia’s ruling party presidential candidate Edgar Lungu took a slim lead over his rival Hakainde Hichilema after votes from half of constituencies were counted, the electoral commission said on Thursday.

With no reliable opinion polls in the southern African state, few experts are keen to call a winner in the contest to succeed Michael Sata, who died in office in October aged 77.

Results from 80 out of 150 constituencies showed Patriotic Front candidate Lungu (58) had 50.85% of votes, compared to 45.18% for Hichilema (52) a wealthy economist from the United Party for National Development.

Defence and Justice Minister Lungu polled 533 613 votes and Hichilema 474 076 out of just over one-million ballots counted, the Electoral Commission of Zambia (ECZ) said.

Turnout was around 35% as heavy rains disrupted voting across much of the landlocked country. Observers said the election was conducted in a fair manner.

The final result was due to be announced on Friday but is expected to be delayed.

Stuttering economy
The kwacha was 0.4% stronger at 6.45 against the dollar at 9.30am GMT, firming for the second day as the peaceful vote eased investor jitters about stability in Africa’s second biggest copper producer.

With another election due late next year when Sata’s term would have ended had he not died in office, the winner will have little time to turn around a stuttering economy in one of Africa’s most promising frontier markets.

Zambia has averaged 6% to 7% growth as the mining sector boomed but that slowed to 5.5% last year, the International Monetary Fund says, and could ease further with the price of copper reaching a six-year low this month.

Lungu, a former lawyer with a laid-back, populist style, has used his campaign to tap into the grassroots support of his predecessor Sata, promising voters cheaper food and fuel.

Hichilema, one of Zambia’s wealthiest businesspeople, has said if he wins he will draw on his experience in the private sector to attract foreign investment and diversify an economy, where copper accounts for 70% of export earnings.

‘Two-horse race’
A planned airlift of ballot papers and polling officers to remote villages was disrupted on Tuesday, the first  day of voting, by thunderstorms which grounded flights.

The delay in the delivery of polling materials led Hichilema to cry foul and allege fraud.

He also complained about the extension of voting, the shifting of some polling stations and alleged acts of violence by ruling PF supporters.

On Wednesday, a number of Hichilema’s supporters were arrested and bundled into a police van.

Police initially asked the supporters to disperse but one of them shouted back at the officers, who then drove them off with batons and tear gas.

A group of southern African NGOs said in a statement the poll was “credible based on the voting day and generally the election was free and fair”.

In the absence of reliable opinion polls, analysts hedged their bets.

The novel coronavirus has not only claimed Zambian lives, but has also put the country’s democracy at stake
Read more
Advertising