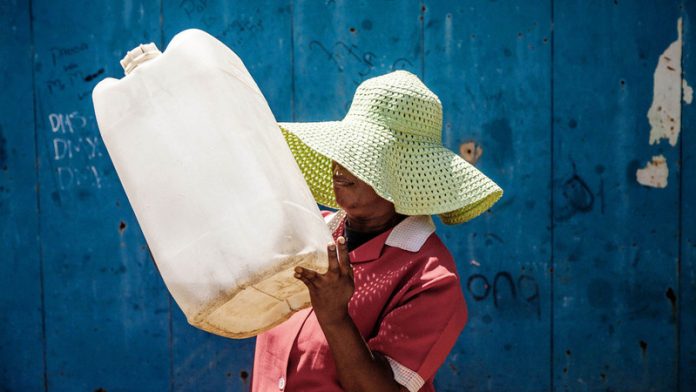 For many South Africans, the water crisis is already here. For others, research and projections show, it is only a matter of time – and perhaps not a great deal of time.

Thanks to load-shedding, and a shortage of water when electricity is restricted, the thirsty future could arrive in major urban centres as soon as this summer.

Early last year, four people died in violent protests over a lack of water in the Mothotlung township outside Brits in North West. In the glare of national publicity, water was quickly restored.

But on Monday, almost exactly a year later, taps in the township again ran dry. When the water flowed again on Tuesday, it was brown.

“I am scared to drink water from the tap. I only use it for bathing and washing clothes. I do buy water from the tuck shop when I have money,” said 72-year-old widow Johana Ngwato.

“My daughter is six years old and, whenever she takes the water, she experiences diarrhoea,” said Ngwato’s niece, Baile Masango.

Grahamstown march
In 2013, a two-week water outage in Grahamstown saw academics, in their formal caps and gowns, march in lockstep on the city council offices, with township residents following, brandishing placards.

Rhodes University, the lifeblood of the town, issued a stark warning that garnered national attention: without water it would have to close its doors.

On Monday night, the water supply went off again without warning in a section of the township overlooking Grahamstown, leaving Tembinkosi Mhlakaza to wonder at what point he should go to fetch water for his grandmother, and how far he would have to go to get it.

“She’s nearly 80,” Mhlakaza said. “Our water went out last night, and it may come on this afternoon. But if it doesn’t, I have to make a plan for her.”

Supply failures
In 2014, the residents of Thlolong outside Kestell in the Free State were promised that a new dam would solve their water woes. On Wednesday, a resident, who did not want to be named for fear of reprisal, said neither the dam nor emergency water supplies were anywhere to be seen.

“We are thirsty. It has been eight years now that we live like this. The tankers that the municipality use to bring us water are not here this week; we didn’t see them last week. We don’t know what we must do now.”

In Johannesburg, some suburbs were warned this week to expect weekend water outages because of scheduled maintenance at a pumping station – the same station that left some of the same suburbs, and some hospitals, without water for days last year. The maintenance plan was later postponed.

These are no longer isolated cases. According to government officials, about a third of all towns are in some form of serious water distress. The department of water considers one in 10 municipal water systems to be totally dysfunctional, and, of those that are working, a quarter experiences regular service disruptions of more than two days at a time.

In provinces such as Mpumalanga, there are more households that have regular water interruptions than those with a steady supply.

Municipal incompetence
In Mothotlung and Grahamstown, the water supply issues can be linked directly to municipal incompetence, a lack of engineering skills and the failure of management. Neither area has a shortage of untreated water, but they are going thirsty because of a lack of maintenance and proper financial administration and planning.

These problems show no signs of abating, as bitter experience shows.

“If you give me the money and people, I can fix it up for good,” said a Grahamstown city engineer, who is not authorised to speak to the media. “Without money and people, I’ll keep it running as long as I can. Just don’t ask me to fix it quickly when it really all breaks down; then you can keep your money.”

In Johannesburg, water shortages in 2014 were caused by electricity failure to a key pumping station, which in turn was linked to cable theft.

With Eskom warning that there will be regular load-shedding for the rest of the summer, and unable to deliver consistent power for several more years, water engineers are trying to work out how to manage shortages.

Meagre reserve margins
In many areas, water systems have either little or very meagre reserve margins. Electricity outages at pumps that move raw water could leave treatment stations without water. And, without treated water to move, pumps responsible for distribution would be idle when they do get electricity.

These two factors – local incompetence and a national electricity shortage – will have the biggest impact on what, if anything, comes out of the taps for the next several years.

But, within the next decade, two other fundamental issues are likely to make themselves felt – problems that no amount of local governing excellence or electricity will solve.

For one, there is simply not enough water left to go around.

Johana Ngwato says she is too scared to drink the water in Mothotlung. (Gustav Butlex)

“The situation currently in South Africa is that we have 98% of the water in the country being considered fully allocated. This means that my child and your child that is being born tomorrow has 2% of water for use going into the future,” then water minister Edna Molewa said of water usage rights in 2013.

Eskom first
Eskom has a 99.5% assurance of receiving water, meaning the power utility gets water before any other sector of the economy.

The 2030 Water Resources Group, of which the department is a member, has calculated that, by 2030, the demand for water will exceed supply by 17%. In most of South Africa’s catchments, demand is already outstripping supply, and it is only by piping water from places such as Lesotho that there is enough for now.

Climate change projections are that, by mid-century, reduced rainfall could lower the amount of available water by 10%. Rainfall is expected to come in shorter, but more violent, spells. The projections say this will make collection in dams and underground difficult.

Exactly how much water is available is a complex calculation, with many variables and estimates to consider, and it is seasonal, to boot.

In lay terms, the easy water is already being harvested. Major South African rivers have been dammed to maximum capacity – there are nearly 4?400 registered dams – and some would argue beyond their capacity; river systems require what is sometimes referred to as an “ecological reserve”, a minimum amount of water to continue functioning and be useful.

Barriers to supply
Water systems that could handle new dams are both far from population centres and limited in their ability to supply water.

“Many parts of the country have either reached or are fast approaching the point at which all of the financially viable freshwater resources are fully utilised and where building new dams will not address the challenges,” the department of water affairs said in its 2013 strategy report.

That leaves South Africa more dependent than ever on water pumped from Lesotho, where a new phase of the Highlands water scheme will come on line in 2020.

But all the run-off from Lesotho must inevitably flow through South Africa to the ocean, making even that water-rich country a finite resource for South Africans.

An increase in global temperatures is expected to increase evaporation from dams, which potentially makes building more an exercise in running on the spot rather than getting ahead.

More groundwater can be exploited, but only by so much. Desalination is possible, but it requires large amounts of electricity and is very expensive.

Little to go around
That all leaves little untreated water to go around, even without the expected increases in municipal use, because of a growing population, agricultural use, which is increasing the amount of land under irrigation and is a mainstay of plans to improve both employment and food security, and industrial use.

“Increases in water supply cannot match the expected increase in demand without additional and far-reaching interventions,” Steve Hedden and Jakkie Cilliers, of the Institute for Security Studies, wrote in a September 2014 paper. “The water crisis cannot be solved through engineering alone.”

The second structural problem is an unfolding ecological ­disaster, which is making available water more difficult to treat and, eventually and without intervention, will make direct use of untreated water impossible.

Human waste
The sources of pollution in fresh water include industrial run-off and acid mine drainage, but human waste is a larger and more immediately dangerous component, ironically because of the large amount of water South Africans use.

“Most waste water treatment facilities are under stress because so much more waste water needs to be treated,” said Gunnar Sigge, head of Stellenbosch University’s department of food science and one of those involved in a seminal – and alarming – 2012 study for the Water Research Commission.

“Some of the biggest problems [in the water system] are caused by treatment works that aren’t functioning.”

Jo Barnes, a specialist in community health risks at Stellenbosch, said a chronic lack of investment in treatment plants meant conditions that should not exist, such as diarrhoea, were killing people.

“The whole environment where people live is contaminated. This is a massive, massive problem, but one that people will not talk about. There are just a few angry people trying to raise awareness.”

The 2012 study, carried out in all the provinces and over a three-to-four year period, found that the amount of faecal matter in many water systems made it unsafe for irrigation, because eating raw produce watered with it could cause illness.

In Mothotlung, Serube Lukhelo is afraid to give her one-year-old baby water that could cause diarrhoea, so she spends what money she has on bottled water.

In Grahamstown’s Joza location, Nomfundo Bentele is considering putting up a sign at her hair salon to let customers know whether she has water or not.

In Johannesburg residents and hospitals wait to hear when water from their taps will stop running.

Everywhere else the clock is ticking.

Sarah Wild
Sarah Wild is a multiaward-winning science journalist. She studied physics, electronics and English literature at Rhodes University in an effort to make herself unemployable. It didnt work and she now writes about particle physics, cosmology and everything in between.In 2012, she published her first full-length non-fiction book Searching African Skies: The Square Kilometre Array and South Africas Quest to Hear the Songs of the Stars, and in 2013 she was named the best science journalist in Africa by Siemens in their 2013 Pan-African Profiles Awards.