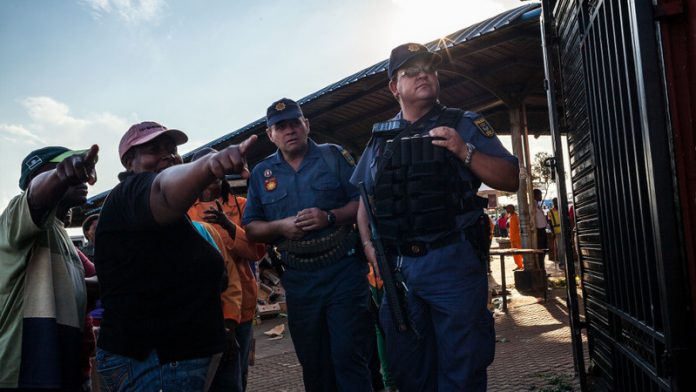 The looting of foreign-owned shops in Soweto continued into the night and spread further into the township, with youths scouring the streets for abandoned shops.

Foreign shopkeepers evacuated Soweto and could be seen loading their stock into trucks and leaving under police escort.

Two people have died and 121 were arrested in the wave of looting that was sparked by the shooting of a teenage boy by a foreign shopkeeper in Snake Park, Soweto on Monday.

Trucks belonging to Amalgamated Beverage Industries roamed the township collecting their fridges, which, in some cases, had already been damaged by the looters. “If we see cops, we stop and ask to take our fridges. If we leave them, they’ll end up at the scrapyard, sold by the nyaope boys,” said a company employee who refused to be identified.

Some youths roaming the streets seethed with anger: “A boy has died, what would you do if it was your brother,” said Tebogo Sechaba, in an attempt to justify the rampant looting. Others were in it for the available goods: “I’m trying to get some free airtime, they always charge us extra,” said Bhekani Buthelezi, as the sun set. He waited for police to leave a Dube row of foreign-owned shops.

A dreadlocked woman in blue accident-response overalls urged the Bangladeshi shopkeepers inside Khwezi Supermarket to “organise transport guys. Soweto is big and the situation in Soweto is very bad, we can’t be here all day.”

Rubel Mahabubu Rohemon, a young, burly Bangladeshi shopkeeper, replied in anger, “We’re not shooting blacks. We’re not Somalian. We’re Bangladeshi. This shop has been open for only four months.”

About eight of his colleagues helped him load their stock first into mesh laundry baskets, and then onto several trucks. Rohemon said they were headed to Mayfair, but would not give further details.

Outside a courtyard area demarcating a daytime market in Khwezi a crowd of schoolchildren and a few adults had gathered on the edges of a police cordon.

There was the odd stone thrown in the direction of the trucks. But on the whole, the damage had already been done. A roll-a-door lay bent out of shape on the paved ground and glass from the large storefront windows covered the edges of the two-tier supermarket.

‘Foreigners a security threat’
A man who said he represented the community policing forum of greater Jabulani said they had sent a team to speak with Gauteng MEC for Community Safety Sizakele Nkosi-Malobane earlier this week. Among the recommendations he said, was that foreigners must leave and not return as they posed a security threat.

“They avoid being in houses, they prefer being on their own. They are strategically positioned in corners. What if there’s a war?” he said.

In the nearby Meadowlands Zone 5, a topless, tall thin man in charcoal jeans and All Stars shoes was nursing two head wounds with a plastic-wrapped ice pack. Identifying himself as Koni Monyesiala, the man said he was injured while trying to help some foreign shopkeepers load their goods onto trucks.

“They were either Somalis or Ethiopians, I couldn’t tell,” he said, the water from the ice block dripping down his face. “After we helped to load the goods, the shop owner took out R200 and gave it to the four of us, people started fighting over the money. I was hit with bricks and fists until I managed to run into someone’s house.”

His friend, who wouldn’t be identified, said, “this thing is not xenophobia… even the Zimbabweans and the Mozambicans have been looting.”

At some point in the afternoon, Winnie Mandela was spotted inside a black vehicle flanked by security personnel. She remained in the vehicle and did not address the crowd that had gathered at the intersections of Ndlovu and Schreider roads. Her security personnel said she was compiling a report that she would later hand over to the Community Safety MEC.

In the nearby Meadowlands zone 3, Ethiopian shopkeeper Tagesa Hailemara was being protected by the community he services. Women brandishing sjamboks waved them to a crowd standing across Sanders street daring young men to break into his shop.

Foreigners have left Soweto, fearing for their safety after a foreign shop owner shot dead a 14-year-old boy he accused of trying to break into his shop.

The shop owner was arrested and appeared in court on Thursday. He is expected to bring a formal application for bail in the Protea Magistrate’s Court on Monday. On Wednesday night, a foreigner was killed in ongoing looting.

A youth in Orlando who had witnessed the looting said, “When people wake up tomorrow, they are going to wonder where to go [to shop] because South Africans only sell ‘ayikho’ [We don’t have]. You want bread, ‘ayikho’, you want airtime, ‘ayikho’. Only the new malls will benefit from this.”

More arrests
On Thursday afternoon Gauteng police commissioner Lieutenant General Lesetja Mothiba confirmed 68 arrests and two deaths since the violence started. On Friday morning he told journalists in a media briefing at Moroka Police station that 121 people have been arrested in connection to looting in several areas around Soweto.

Mothiba said the offenders face charges of murder, attempted murder, fraud and possession of suspected stolen property. According to the general, eleven illegal guns were confiscated, with ten of the fire arms belonging to foreign nationals.

Mothiba has warned police officers not to take part in criminal activities as one officer was caught on camera while looting. He said they are dealing with the matter. “Members working administration duties at both provincial and cluster levels were also called in to saturate Soweto with a view of preventing further looting from taking place.”

He said the police had identified hot spots in Naledi, Jabulani, Dobsonville, Protea Glen and Moroka, where deployment had been intensified. Mothiba also said the situation was “relatively calm” last night as scores of police officers were deployed in different parts of the township.

“Soweto is huge. We don’t want this situation to go into the weekend. We want the matter to be resolved. Last night police monitored the situation.”

The general condemned police officers who force journalists to delete photos on their cameras. He said: “Journalists are doing their job and police should not delete pictures.” This was after a Sapa reporter was forced to delete photos during the unrest.

Another media briefing is expected to take place at the police station again at 11:00 am. – additional reporting by Sthembiso Sithole

Sthembiso Sithole
Sthembiso Sithole is a social media specialist. He recently studied BA Honours in Journalism and Media Studies at the University of the Witwatersrand. In 2014, he obtained his journalism qualification at Tshwane University of Technology. He has achieved so much, and there are tons more he dreams of accomplishing. He has written for The Star, was a blogger for JournTau, worked at SABC as a Digital News Producer and was formerly the Mail & Guardians social media editor.