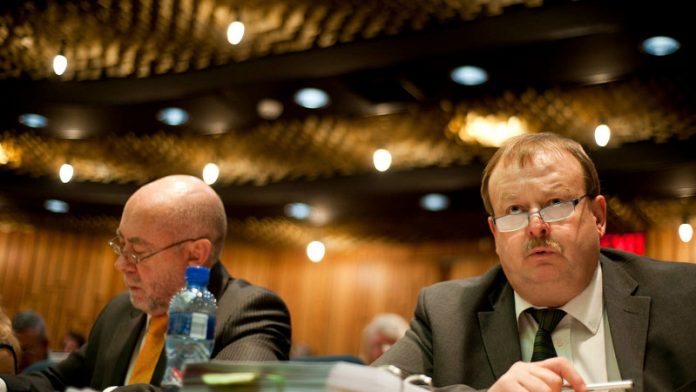 A North Gauteng high court judge on Friday granted apartheid-era chemical warfare expert, Dr Wouter Basson, the right to apply for the recusal of Jannie Hugo and Eddie Mhlanga, both members of the  professional conduct committee of the Health Professions Council of South Africa (HPCSA).

Basson, who was found guilty of unethical conduct for activities during the 1980s and 1990s when  he was head of the apartheid government’s chemical and biological warfare programme, filed an urgent court application on Monday.

His sentencing hearing before the committee was put on hold  until the application was heard.

In the application the cardiologist sought to compel Hugo and Mhlanga to provide information  regarding their membership to any of the organisations that signed a petition calling for the removal  of Basson from the roll of medical practitioners brought before the committee.

In the HPCSA’s answering affidavit to the interdict application, it emerged that Hugo, who is the  chairperson of the professional conduct committee, is a member of two of the organisations that  signed the petition: The South African Medical Association and the Rural Doctors Association of  South Africa.

“Any litigation will therefore be entitled, if there are prima facie grounds to suspect that a  presiding officer in any trial, or enquiry like the one in hand, may be biased or that his or her mind  set could have been contaminated by any aspect outside the proceedings, to approach the court for  the appropriate relief,” said Bam.

Basson can has ten days to apply for Hugo and Mhlanga’s recusal.

The HPCSA was further  ordered to pay for the costs of the application.

Basson’s teams have in the past prevailed with strategies that have worked to cause this hearing to drag on for 15 years after a complaint was filed against them in 2000.

No ruling from Tim Noakes hearing, matter adjourned until April 2017