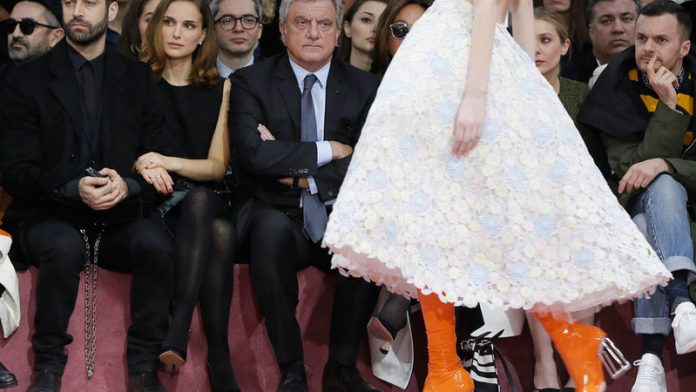 The words the designer Raf Simons used in praise of his teams in the Christian Dior ateliers after the haute couture show on Monday afternoon were interesting: “They have no fear,” he said. The petites mains, the craftspeople of haute couture, are the keepers of the flame in high fashion. They are much lauded for their traditional skills, their long-suffering patience. The techniques handed down through generations, the hundreds of hours of close work behind the scenes, are championed each season.

To praise their fearlessness is rather different. And the choice of words is striking, in the context of Paris this month: whether consciously or not, Simons made a link between the workers’ spirit in the ateliers, and the spirit of the demonstrations on the streets of Paris after the terrorist attacks.

This is a slightly less far-fetched connection than it seems from a London perspective. The great Parisian fashion houses have a place in the city’s mythology and self-image, in a way which has no equivalent in any other capital. This week’s shows were haute couture, the highest echelon of fashion, a tier of the industry which – in contrast to the ready-to-wear catwalks that now happen everywhere from Reykjavik to Nairobi – takes place only in Paris. Haute couture is an expression of French national pride, and of Parisian self-belief.

Catwalk shows are months in the designing, planning and making. This week’s clothes were all conceived long before, rather than in reaction to, the events of the past few weeks. But the editing, staging and styling decisions that happen up until the last moment are hugely important in framing the message of a show. And at haute couture, with its five-figure price tags, almost nobody actually buys the clothes; it is the message that matters.

This was the boldest, bravest, most forward-looking week of haute couture shows Paris has seen in a while. Since Chanel saved seven specialist couture workshops from bankruptcy in the 1990s – an undoubtedly noble move, which preserved several hundred jobs, albeit also a smart strategic one that has elevated the Chanel brand to an unassailable role of the fairy godmother of fashion – the haute couture shows have been a kind of romantic poetry in thrall to these traditions. Haute couture houses, maddeningly coy about exactly how much the dresses cost, or exactly how many clients there are, have loved to shower reporters with statistics about hours: 300 hours’ work on this wedding dress, four hours per metre for this hand embroidery. All of which is undeniably impressive, but has begun to feel slightly unprogressive – Luddite, even – in its focus on repetitive manual labour, the patience and work ethic of the ateliers as somehow more worthy of praise than their technique or accomplishment.

This week, it felt as if ideas and imagination were what mattered. At Dior, Chanel and Giambattista Valli, the tenor of the haute couture – both in the clothes, and in the sets – was bolder and more daring than last season. The headcount of Hollywood celebrities was much lower than is usual for a fashion week that takes place in prime Oscar-dress-shopping time, an absence that some attributed to an unwillingness among American actors to travel to Paris. Perhaps as a result, play-it-safe red-carpet glamour was sidelined in favour of strong fashion pieces. At Schiaparelli, charismatic muse Farida Khelfa brought in Jean-Paul Goude – photographer of Kim Kardashian Breaks The Internet fame – to design a set that starred the French gospel choir Les Cherubins serenading the audience from Juliet balconies set into the walls above their heads. The subversive, surreal codes of Schiaparelli were unmistakable in a print of gloved hands appearing to fasten a trompe-l’oeil embroidered bracelet at the back of a dress. A bracelet was made of seamstress’s pins, the gold points gleaming next to but somehow not piercing the skin. An alarming piece to wear and, beneath the choir above, a small, silent paean to fearlessness.

With bare midriffs and low-slung hip belts, Karl Lagerfeld flirted with bad taste this season. Then there were outsized picture hats swathed in black tulle – for very glamorous beekeepers in mourning? – and Cara Delevingne-ish beanies encrusted with roses. Under the catwalk, 300 engines powered a set of paper flowers that bloomed and coloured as the show unfolded. Where past Chanel shows have referenced the formal elegance of Versailles, this time the garden was allowed to run wild.

DIOR
The setting for the Christian Dior show – a circus tent of white scaffolding with pink carpets and mirrored walls, and a catwalk snaking around the walls – was designed to disorientate. The same went for clothes that took elements of the 1950s, 60s and 70s and melded them together in an impossible dream sequence of ideas. The loopy jumpsuits were super trippy, while transparent plastic duster coats printed with delicate, inky florals and skintight latex boots in hallucinogenic shades were weird – and, weirdly, gorgeous.

It was, for the most part, glamour-as-usual on the Versace catwalk. But a bold attitude was brought by Donatella’s choice of models for the finale: the 90s supermodels Eva Herzigova, 41, and Amber Valletta, who, at 40, rocks a fabulous undercut. The skintight, flared jumpsuits had a touch of David Bowie about them – a trend echoed the next day in psychedelic swirls and sequinned stripes at Dior’s Moonage Daydream show.

“Elsa’s pioneering spirit” was the theme at the third catwalk show for the relaunched Schiaparelli brand. A hot pink catwalk was reflected in a box-of-mirrors set, with surprises to be spotted from all angles: poker-chip buttons fastening elegant silk trousers, constellations traced across eveningwear, and embroidered bows bursting into three-dimensions, as if the dresses themselves were coming to life.

This collection was a bold statement of intent, from a designer not content with the (lucrative) position of being the fairytale wedding-dress designer of the moment. Taking its queue from the Metropolitan Museum’s Impossible Conversations show, which imagined dialogue between Elsa Schiaparelli and Miuccia Prada, Valli imagined a conversation-in-clothes between Coco Chanel and Janis Joplin, two wardrobe rule-breakers. With cocktail dresses layered over houndstooth trousers, it was a hymn to sartorial irreverence.