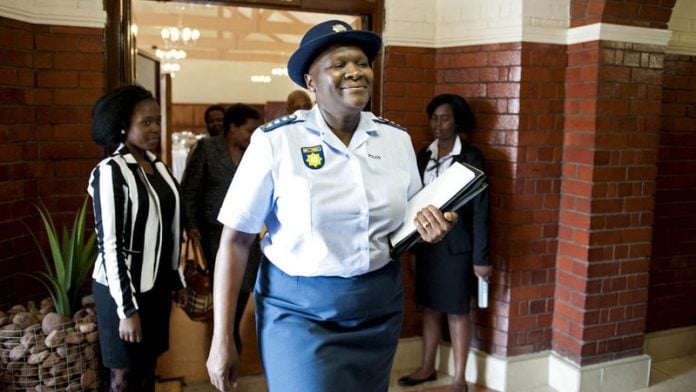 The South African Police Service (SAPS) has rejected a report on police criminality, saying it was compiled and funded with “malicious intent”.

National police commissioner Riah Phiyega objected to her photograph being used in the report, which linked her leadership to high levels of criminality in the police, according to a sample studied.

The South African Institute for Race Relations (SAIRR) did the research for the report, titled Broken Blue Line, and Afriforum, which regularly campaigns for what it calls “minority rights”, funded it.

The SAIRR describes itself as a “classically liberal think-tank” that aims to contribute towards policy solutions to problems the country is facing.

The report’s methodology involved scanning media reports to identify incidents of police involvement in serious or violent crime. The SAIRR studied 100 such reports, looking for “patterns of behaviour”.

Easily identified
It was “easy” to identify 100 incidences and this process took less than a week, the SAIRR said.

Of these 100 reported incidences, the SAIRR said 32 related to murder and attempted murder, 22 related to armed robbery, 26 to rape and 20 to other crimes.

But police spokesperson, Lieutenant General Solomon Makgale, said the SAPS did not support the report.

The police took issue with the fact that the report did not study case dockets, SAPS databases and court reports or judgments as source material, and that it had not been given to the police’s management before being released to the media, he said.

Makgale said Phiyega “objected” to her photograph being used in the report despite her request that it be removed.

Phiyega said the report was released and funded “with malicious intent”.

Problematic leadership
Afriforum said Phiyega was one of the main reasons behind the police service’s problems.

The SAIRR said it had asked the SAPS for data on action taken against police officers accused of serious and violent crimes in November 2014, but that the SAPS had not responded.

A draft version of the report then “made its way into the media”, the SAIRR said, at which point Phiyega said she should have been contacted for comment.

The SAIRR said that in January this year, it indicated to Phiyega’s office that it would be willing to show the commissioner a draft of the report and again asked for data on action taken against police officers accused of crimes.

The police declined their request this time round, said the SAIRR.

The report found that lower levels of confidence in the police service had resulted in middle-class communities turning to the private sector for security, while poorer communities resorted to vigilante justice.

The SAIRR said there had been “no significant decline” in police criminality since its previous report, released in 2011.

Police had been using their service weapons to commit crimes and the incidences were not isolated, but appeared to form patterns.

The report made a number of recommendations, including strengthening the chain of command within the SAPS, appointing university-educated officers to lead specialised units and police stations, and establishing a new investigating agency in the department of justice that is dedicated to probing police criminality.

The SAIRR said Ipid needed strengthening and that police appointments needed to be “made on merit and not in terms of race or political loyalty”.