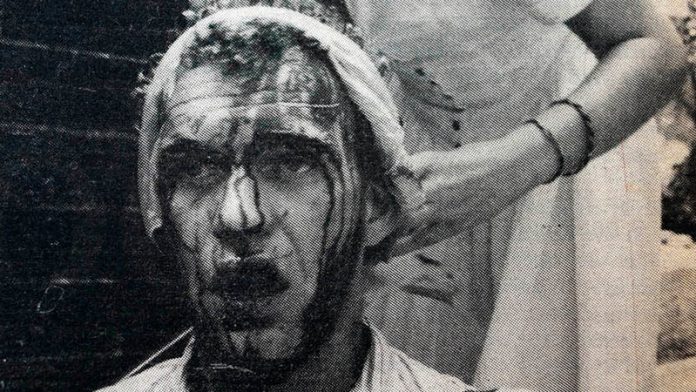 The three guys who are chilling on the sidewalk a few metres away from where the riot policeman tried to kill me exactly 25 years ago find it funny why I’m back here. They’re using last week’s New Age as cushions. Next to them a stack of rubbish bags is bulging with mowed grass. We were making small talk on the corner of Rissik and Wolmarans streets in Johannesburg’s Braamfontein and they had just told me they were from Limpopo.

“Really?” I asked them incredulously, after hearing their accents. “Okay, we’re from Zimbabwe,” said one.

Now it is their turn to be sceptical. “A policeman beat me up right there,” I tell them and point over their shoulders to the unkempt lawn behind the fence.

They look at me, at each other, and then start chuckling. “I’m not lying!” They are laughing now. Probably because of what they have experienced, or maybe because it is simply too weird picturing a white guy being assaulted by a murderous cop in broad daylight.

Shock announcement
It was lunchtime on February 2 1990. A few hours earlier on that hot day, we watched mesmerised on television as then president FW de Klerk opened Parliament and shocked the world with his announcement that he had unbanned the ANC and other liberation movements.

He had also lifted the harsh media restrictions that made it impossible for journalists to cover so-called political gatherings because of emergency regulations.

I was working as a reporter on the country’s only Afrikaans left-wing paper, Vrye Weekblad, which became famous – or infamous, depending on your politics – for exposing the apartheid state’s shadowy death squads the previous year.

Although it was Friday, and our weekly paper had already hit the streets that morning, I wasn’t going to miss any of the excitement of that historic day. So I grabbed my camera and rushed to Braamfontein, which housed many progressive organisations, the University of the Witwatersrand and some unions, knowing that marches of elated activists would erupt from there.

I wasn’t wrong. A large group of dancing students and workers were already approaching from the university on the wide, hot, tarred road, floating towards me on a mirage.

I joined them, and a few blocks later we reached the spot where I’m standing now, exactly 25 years later.

Riot police
Behind me, the feared riot police brought the dense lunchtime traffic in the adjoining four-lane Rissik Street to a standstill. Not wanting any of these celebrations, they parked their macho vehicles wildly on the pavements with screeching tyres, burped off their sirens, and about 10 of them charged the surprised students. And me.

“This is an illegal gathering,” barked their adrenalin-charged captain over his megaphone. “I give you a minute to disperse.”

“But the president has legalised gatherings like this,” I beseeched one of his sidekicks, a young constable with an undernourished blond moustache. I was sensing serious trouble. “And as reporter; I’m allowed to be here.”

His crazed eyes told me that perhaps I had made a huge mistake. I spoke to him in his mother tongue, Afrikaans. My pure accent told him one thing: I was one of those he despised even more than the black activists, a fellow Afrikaner who had sided with the “enemy”.

“Stand aside!” he spat, as he menacingly tapped his heavy black truncheon in his palm. “I’m going to get you!” He was a man of his word. It looked slow, but happened very fast. His truncheon whooshed through the air, straight for my temple – the place to aim for if you want to kill.

Thwack! He missed my temple by two centimetres.

Massive bolt
My knees collapsed under me. The next massive bolt came as I was going down … Thwack! On top of my skull. I was covering my head with my arms. Another blow crashed on to the back of my head.

Blows rained down pneumatically on my arms, all over my upper body, as I lay curled up in a foetal position.

As a parting shot, he pulled out his teargas aerosol can and sprayed straight into my eyes.

I picked up my camera, bag and glasses, and stumbled in the opposite direction into the traffic that, fortunately, was still at a standstill as drivers stared at this brutal spectacle.

Chaos continued as riot police officers chased students and workers into a restaurant across the lawn, where the owner held them down for the cops to assault.

I turned away from the traffic and lurched back across the lawn towards the restaurant. My eyes were burning. I wiped my face and saw it wasn’t tears but blood streaming down my face, my neck, soaking my shirt. The white restaurant patrons jeered at me. “See, that’s what you get when you mix with the blacks!” one racist shouted, as the cops started retreating back to their vans.

“Why don’t you sleep with their women, then?” another patron shouted at me, to uproarious laughter from his friends. “Bring them!” I roared back. It shut them up.

Different times
The building where the restaurant was now houses Phoenix College. A fat rat scurries across the lawn where the beatings took place. Across Rissik Street is an impressive Rea Vaya bus station. A bright yellow poster on the lamppost encourages passersby to register for a “National Certificate in Policing/Resolving Crime”.

Prophet Ndlovu guarantees on another poster that “you’ll only pay after the job’s done”, promising you will “see your enemy on mirror”.

I saw that riot cop once again, a week after the incident. I covered the English rebel cricket tour that took place amid many protests. The police responded in typical violent fashion. I was walking back to my car with the air still thick with teargas outside the Wanderers cricket ground, and saw Pale Moustache and his mates leaning against their police vans. When they noticed me, they laughed and shouted. I pretended not to see them, got into my car and drove away as quickly as I could, with my ego needing more than the 10 stitches in my head.

The police settled the case I brought against them out of court and I never found out what the cop’s real name was. He had removed his name badge before the beating.

How do I feel now, back here for the first time in a quarter of a century?

I don’t know. Do I hate that cop, still? For a number of years I wanted revenge. Gradually though, there have been other things to hate, fortunately more to love, especially in our ever-changing, imperfect society.

The three Zimbabweans are now handing out pamphlets for cheap bus trips up north.

“Check for me,” says one as I say goodbye.

“What must I check?”

Charles Leonard is the news editor of the Mail & Guardian and has been a journalist since 1987.