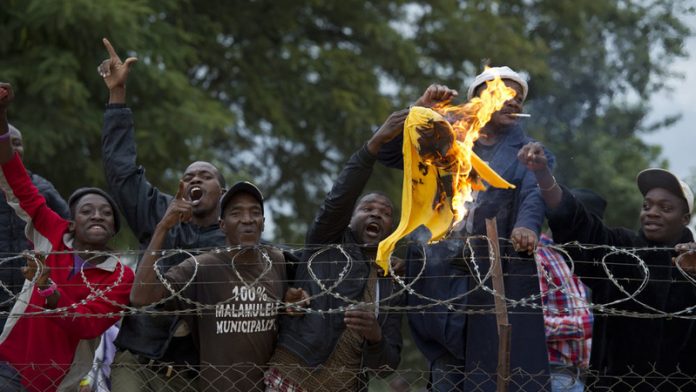 Majakaneng village near Mooinooi in the North West province was tense on Wednesday, with main roads closed due to continuing protests in the area, according to the community safety department.

“The stoning of passing vehicles has led to the closure of the road between Mooinooi and Brits. Motorists are advised to use the Lonmin private road as an alternative.”

Around 400 protesters from the village burnt tyres and a bus on the Old Rustenburg Road on Monday morning.

“They allegedly complained about the water and electricity supply in their area,” said Brigadier Thulani Ngubane.

“The community barricaded the Old Rustenburg Road with burning tyres and also burnt a bus. No one was injured.”

The protest was believed to have taken place around 5.30am.

“The community is angry because there is no water, no proper roads and we don’t have the RDP houses we were promised,” said community member Pule Rakomane at the time.

On Tuesday Limpopo police reported that a section of the Malamulele High School had been damaged by a fire.

The administrative block caught fire late on Monday night, said police spokesperson Colonel Ronel Otto. “At this stage, the cause of the fire is not yet known … We cannot rule out that it was an arson attack,” she said.

The township of Malamulele has been tense and under heavy police watch following a month of violent protests.

The area has been brought to a standstill in recent weeks following a demand by residents that they be granted their own municipality. Protests first started in the town before general elections in May last year. – Sapa

President Cyril Ramaphosa’s Nasrec promises about accountability need to be effected by the ANC, but the party seems incapable of self-policing
Read more
National