This is where the bodice is buried 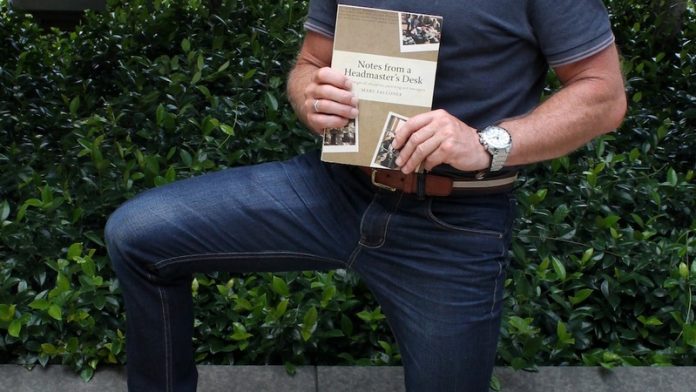 Marc Falconer arrived for our interview more than adequately dressed. He was clean-shaven, with a flirtatious smile, and a rugged but ever-so-slightly tight T-shirt, which gripped suggestively at his biceps, his tastefully undone top buttons giving a hint at a greying chest of hair.

When I sat down with the former head teacher of King David Linksfield in Johannesburg and the author of Notes from a Headmaster’s Desk (Pan Macmillan, 2014) with the intention of challenging him about his questionable portrayal of a woman’s body in the book, the last thing I expected this doyen of the teaching profession to share was a secret passion for cheesy, romantic literature.

Within half an hour of meeting, Falconer confessed: “I always had it at the back of my mind to write a book, but it was going to be a different kind of book,” he pauses, “like a cheap and trashy novel – a saucy Mills and Boon that makes cash.”

Notes from a Headmaster’s Desk is an amalgamation of experiences from Falconer’s teaching years, predominantly his nine years as head of King David, one of the top schools in the country. The chapters are short, the style is accessible and the tone strays into chauvinistic.

The interview started on safer territory. He says he wrote this memoir-cum-guide-to-handling-teenagers at the suggestion of “innovative King David parents” who saw book potential in his weekly newsletters. Born to Roman Catholic parents, he is a prized outsider in the Jewish community. He managed to win over this extended family by playing to a nonthreatening outlook on teenage development.

I put it to Falconer that his title suggests an old-fashioned, patriarchal power dynamic, to which he enthusiastically agreed. “I don’t like the title at all. The word ‘headmaster’ is dated and suggests dull, 19th-century stuff.”

For a man at the top of a respectable profession, he is not afraid to talk about sex. In a chapter on the sexualisation of teenagers, he rails against pornography, raising concern that “our children are confronted on a daily basis with what we would consider unsuitable material”, later described as “lewdness, smut, filth”.

Oddly, his writing echoes the chauvinism he despises. In a chapter on a pupil who is struggling socially and academically, the explicit sexuality of the child’s mother is given as the morally unsound reason for her child’s failings.

He says the chapter had been toned down. He defended that she was “needlessly flaunting with a clear agenda. It’s like going to the bank for a loan in a G-string.” On to the final meeting: the distraught woman breaks down, only to be objectified as a “heaving chest undulating like the waves of the sea in a tropical storm”. With humorous grace, he admitted to his own agenda: “It really is Mills and Boonish. I was trying to be funny. Hearing it back, it doesn’t feel so great.”

He insists he was “by no means judging her”, but the revelation at the end of the chapter that she is a stripper, willing to give Falconer a lap dance to keep her son in school, appears to warrant ridicule.

Sitting up, Falconer’s chest gave a slight undulation. In a moment of unguarded reflection, he laid the subject to rest. “It was a Mills and Boon ambition that was slightly subverted. Maybe my next effort will be just Mills and Boon … Mills and Boon in a school.”