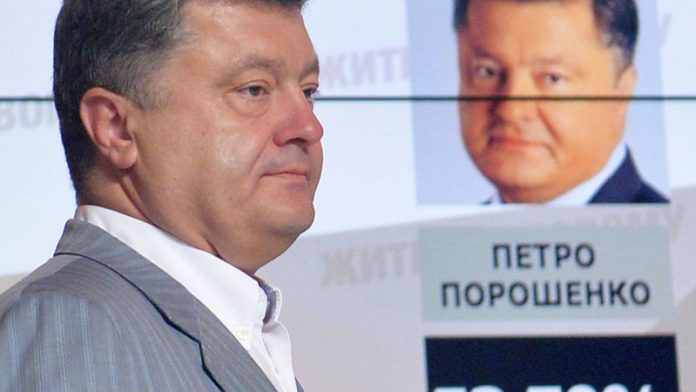 Fighting between pro-Moscow separatists and government forces in Ukraine has killed at least 45 people in the past 24 hours, Kiev officials and rebel authorities have said ahead of a four-way summit in Minsk to thrash out a peace deal.

Ukrainian President Petro Poroshenko said on Wednesday that he is ready to introduce martial law if the conflict with pro-Russian separatists in the east escalates.

“The government and Parliament are ready to introduce martial law throughout Ukraine,” Poroshenko told a Cabinet meeting ahead of the peace talks. “I will not hesitate with this decision, if the actions of the aggressor lead to further escalation.”

At least 19 soldiers died and 78 were wounded, military spokesperson Vladyslav Seleznyov told journalists in Kiev, including five troops in a rocket attack on the east Ukrainian hub of Kramatorsk.

Another 11 people were killed in that attack, the first time rebels have struck the government’s eastern military headquarters, according to Poroshenko.

City officials said eight people had been killed in the rebel stronghold of Donetsk, including five in a mortar strike on the city during the Wednesday morning rush hour.

Rebels, who rarely give a military toll, said on Tuesday that they had lost seven fighters.

The leaders of France, Germany, Russia and Ukraine were to meet later on Wednesday in Minsk, the capital city of Belarus, in the hope of agreeing a peace deal to end the fighting in which the United Nations says at least 5 350 people have died since April 2014.

European Union President Donald Tusk said on Wednesday that Poroshenko will “brief us on the developments in Ukraine” at the meeting.

“It is uncertain whether an outcome can be reached, but despite all the uncertainty, it is worth trying in the interest of the suffering people in eastern Ukraine,” said Steffen Seibert, spokesperson for Merkel. “That this trip takes place offers a glimmer of hope, but nothing more,” he said.

Kiev and the West accuse Russia of arming the rebels and deploying thousands of soldiers in Ukraine, a charge Moscow denies.

Key dates in the Ukraine conflict:

April 13: Kiev announces the launch of an “anti-terrorist” operation aimed at retaking the rebel zones.

May 11: Voters back independence in referendums in Lugansk and Donetsk that Kiev and the West reject as illegitimate.

May 26: A battle breaks out for control of Donetsk’s modern airport after it is seized by rebels.

June 27: The EU and Ukraine sign an association agreement, whose initial rejection by pro-Moscow forces in the previous government originally sparked the Ukraine crisis.

July 5: Rebels abandon their main base of Slavyansk in the face of a government onslaught, retreating en masse to regional centre Donetsk.

July 17: Malaysia Airlines flight MH17 is shot down over rebel-held territory, killing the 298 people on board.

July 29: The EU and the United States broaden sanctions against Russia.

August 25: Rebels mount a counter-offensive in the southeast, reportedly backed by Russian troops and heavy weapons.

September 5: A ceasefire is signed in Minsk, yet violence continues.

October 26: Pro-Western parties win a majority of seats in Ukraine parliamentary elections that are boycotted in the east.

November 2: Separatists in eastern Ukraine vote in Russia-backed elections that Kiev and the West refuse to recognise.

February 6: The leaders of Russia, Germany and France agree in Moscow to draw up a blueprint to end fighting, a day after German Chancellor Angela Merkel and French President François Hollande presented their plan to Kiev.

February 8: A peace summit involving France, Germany, Russia and Ukraine is planned for February 10 in Minsk.

February 9: The Ukrainian military claims at least 1 500 Russian troops and convoys of military hardware have entered the country in the previous two days. The EU agrees to postpone the implementation of new sanctions against Russia pending the Minsk summit. Merkel, who opposes sending arms to Kiev, visits Washington for talks with US President Barack Obama on the peace initiative. Obama says he has not yet decided if the US will supply weapons to Ukraine.

February 10: Intense fighting resumes, including a rocket strike on Kiev’s military headquarters in the east, far from rebel positions. Rebels seek to encircle the railway hub of Deblatseve. Ukrainian forces launch a counter-offensive around Mariupol, retaking control of three villages east of the city. Diplomats scramble to finalise a deal ahead of the Minsk summit. – AFP