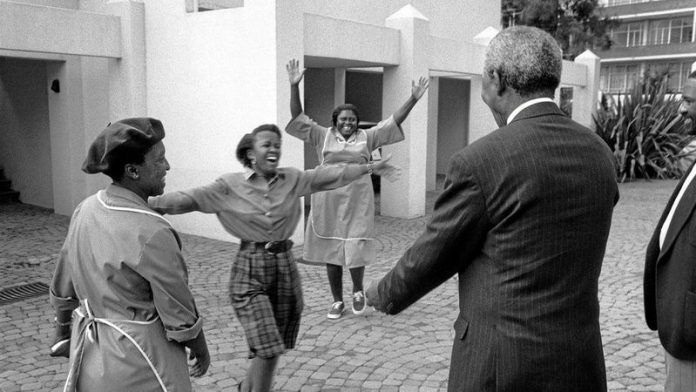 On the day Nelson Mandela walked free 25 years ago, he went missing for more than an hour somewhere between the prison gates and the venue where he was to deliver his first speech.

Mandela’s convoy had left Victor Verster Prison, but never made it to Cape Town City Hall – where a huge crowd was waiting to welcome him.

In a world before mobile phones, the organisers struggled to track him down.

“Now Mandela was free, the world was waiting to see him and [former finance minister Trevor] Manuel had no idea where he was,” said the Nelson Mandela Foundation last week, as it revealed the details of just what happened that day.

Sipping tea, shoes off
He was later found sipping tea with his shoes off in a quiet Cape Town suburban home, his driver having made a detour to avoid the “crushing crowd” outside the city hall.

“I was wondering what had happened to you chaps,” Mandela said.

It was the last of three short stops he made that day in the more than one hour he went missing.

Archbishop Desmond Tutu said the crowd amassed around City Hall was getting restive. “I just sent word and said if he didn’t come, Cape Town would be torn apart.”

When he finally made it, it was so dark Mandela had to read his speech by torchlight with a pair of borrowed reading glasses, his own having disappeared in the rush of his release.

February 11 1990 marks the beginning of the dismantling of apartheid – this year celebrating its 25th anniversary.

Mandela was sentenced to jail for life in 1964 for alleged sabotage. He served 27 years, with stays on notorious Robben Island, then in Pollsmoor and Victor Verster prisons.

His release came days after the country’s last apartheid leader FW de Klerk lifted the ban on the African National Congress and other liberation movements.

Mandela would go on to become the country’s first democratically-elected president in 1994. He retired after one five-year term and died on December 6 2013, aged 95.

Twenty-five years after he walked out of prison, his clenched fist raised, South Africa now boasts of having one of the world’s most progressive constitutions.

“The main gain is that people have rights, people have dignity,” agreed Steven Friedman, political scientist at the University of Johannesburg. “There’s a black middle class in this country which didn’t exist in 1994.

“There is less racism than 20 years ago.”

But even as institutionalised racism has disappeared, it remains a dividing factor in the “Rainbow Nation” of 54-million people.

“Although things are better, we are still stuck with many of the racial biases and many racial prejudices of the past,” said Friedman.

Other problems linger: a slowing economy, joblessness, corruption and the world’s biggest divide between rich and poor.

After years of failing to properly maintain its power stations, Africa’s most developed country is in the throes of an energy crisis that President Jacob Zuma blames on the legacy of apartheid.

And while the world’s top seven fastest growing economies are from Africa, South Africa is not one of them, with its two percent growth less than half of some of the biggest movers on the continent.

“The failures are that we haven’t moved sufficiently from the past,” said Friedman, adding that the gap between rich and poor has yet to be closed.

Before democracy came in 1994, South Africa was run by an “exclusive club of white people”, he said.

“What’s happened over the last 20 years is that some black people have been admitted to the club … but because the club is still there, many of the poor people are still excluded.”

The 25th anniversary of Mandela’s release comes on the eve of the State of the Nation address to be delivered by Zuma to Parliament.

Economic Freedom Fighters leader Julius Malema, who is demanding the president reimburse some of the money used for so-called security refurbishments at his private Nkandla home, has threatened to disrupt Zuma’s speech. – AFP