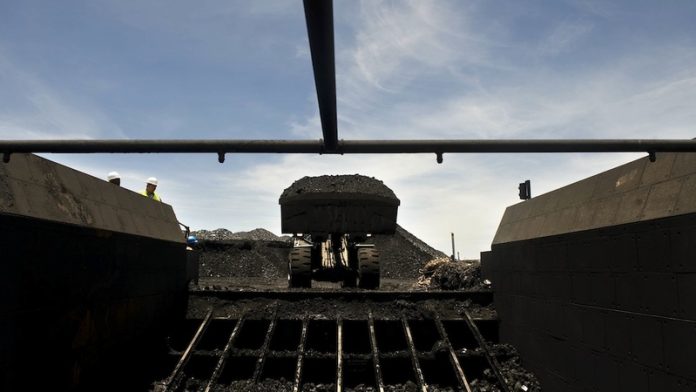 Valentine’s Day on February 14 is also Global Divestment Day. The organisers – a coalition of organisations that are fighting to stop climate change – charge that with governments failing to “take bold action to confront the climate crisis” it is “time for us to take matters into our own hands”.

Their accusations are sweeping and strong: “The fossil fuel industry has our political process in shackles with its financial might.” They say the only way to break the cosy relationship between governments and corporations – which they say is blocking “bold action” on climate change – is to take away the social licence that allows these companies to work. Taking pension funds and investments away from fossil fuel companies will force them to change the way they do business.

“Those in charge of capitalism make good money, and have no intention making the changes we require to go post-carbon,” said Patrick Bond of the University of KwaZulu-Natal Centre for Civil Society on Thursday. Market liberalisation and the shrinking of the social wage had given power to the 1% of the world’s population that controlled most of its wealth, he said. This meant it was important for people to rally around climate change as an issue so civil society as a whole could become stronger. If this happened, then the underlying power of fossil fuel companies could be weakened and made more democratic, he said.

Last year the Overseas Development Institute said an average of R1 200 an adult was being given to these companies in subsidies in the developed world. This was seven times the amount the countries budgeted for lowering carbon emissions and protecting against the impacts of climate change, it said.

In 2013 the International Energy Agency said the fossil fuel industry spent R700-million on exploring for coal, oil and gas.

The Intergovernmental Panel on Climate Change – the United Nations body tasked with collating climate science – said in its report last year that levels could reach a maximum of 450 parts per million. This would keep the average global temperature increase below 2°C. Above that and the panel said the impacts of climate change would be “severe, widespread and irreversible”.

The panel’s solution is to stop digging fossil fuels out of the ground and burning them. Doing this in favour of renewable energy sources would lower global GDP by 0.06% a year. Not doing so would cost 10% of global GDP in damage every year, forever, it said. “The more you wait, the more it will cost [to lower emissions and adapt to change] and the more difficult it will become,” said the European Union’s climate change commissioner Connie Hedegaard.

British nongovernmental group Carbon Tracker calculated last year that, if all the proven fossil fuel reserves on the books of states and companies were burnt, 2?795 gigatonnes of carbon would be released into the atmosphere.

To ensure average global temperatures did not increase by 2°C, only 565 gigatonnes could be released. This meant that 80% of all fossil fuel reserves had to stay in the ground, it said.

The International Energy Agency came to the same conclusion the year before. But when confronted with shareholders asking how much of its reserves stood to be kept underground, oil giant Shell said last year: “We do not see governments taking the steps now that are consistent with the 2°C scenario.” It also said that fossil fuels would still make up two-thirds of all energy supply in 2040.

In South Africa the additional problem is the fact that Eskom and Sasol were responsible for 75% of all carbon emissions. Although the two companies have plans to lower their emissions, activists say this is not enough.

The divestment movement has met with quick successes overseas. Last September the managers of the Rockefeller fortune – built on exploiting oil – committed to withdrawing all its funds from fossil fuel companies: R550-billion.

Their statement said: “We are convinced that if he [oil magnate John D Rockefeller] was alive today, as an astute businessman looking out to the future, he would be moving out of fossil fuels and investing in clean, renewable energy.”

The South African divestment movement started at the University of Cape Town at the end of last year. It has now spread to other major centres under the banner of Fossil Free South Africa. The mood has been one of upbeat celebration, with bands performing at divestment meetings and marches.

The first target has been the big four South African banks, which the movement says publicly show their green investments while putting the majority of their funds into industries that extract raw materials. Ferrial Adam of 350 Africa – one of the organisers of the local campaign – said the campaign had to start with things that people knew, and could impact upon.

“If we can get our banks to change the way they invest, then people can start using their pension and savings to invest in, and reward, companies that are more environmentally responsible.”

This was the quickest way to try to force a change in South Africa’s emissions, because without financing it would be difficult for projects that exploited fossil fuels to go ahead.

“It is incredibly hard in the South African context because of the concentration of emissions, so we will struggle to have the successes that they have overseas. But this is the only way that we can force companies to change their ways.”