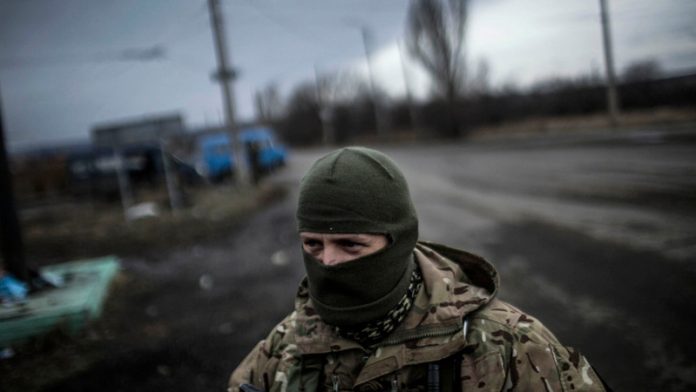 Journalist Ruslan Kotsaba posted a video addressed to the Ukrainian president, Petro Poroshenko, last week in which he said he would rather go to prison for five years for draft-dodging than fight pro-Russia rebels in the country’s east. Now he faces 15 years in jail after being arrested for treason and obstructing the military.

His case is symptomatic of Kiev’s difficulties in mobilising a war-weary society to continue the fight against the rebels, who appear to have an unlimited supply of weapons and training from Russia. As the country nears bankruptcy and the reform programme demanded by the Maidan revolution last year is sidelined by the war effort, the drive to call up new recruits is floundering.

The conflict has cost more than 5 400 lives since it began last year and Russia shows no signs of toning down its backing for the separatist movement. Poroshenko was due to meet his Russian, French and German counterparts in Minsk on Wednesday, and the financial and emotional burden of months of conflict could mean Ukraine is forced to accept a deal that in effect means giving up control of rebel-held territory.

Ukrainian men aged 25 to 60 are eligible for conscription and 75 000 have been called up, of whom 60% will enter service, Poroshenko claimed last week. Preference is given to men with military experience.

A government decree regulates foreign travel for those subject to mobilisation. It means people could be arrested at border checkpoints, with those guilty of draft-dodging facing up to five years in prison – a law that provided the basis for Kotsaba’s video.

“By arresting him for stating a particular viewpoint, the Ukrainian authorities are violating the key human right of freedom of thought, which Ukrainians stood up for on the Maidan,” said Tetiana Mazur, director of Amnesty International in Ukraine.

The Ukrainian security services claim that Kotsaba’s arrest has nothing to do with his journalistic activities. “This is not a fight against Kotsaba as [a] journalist, but there are suspicions against him as a citizen of Ukraine,” said Markian Lubkivskyi, a senior adviser for the security service. He said officers had found “evidence of serious crimes” among Kotsaba’s belongings, but declined to elaborate.

The government has denied there is a major problem with mobilisation, and Pavlo Kyshar, an MP who fought with a volunteer battalion, said there are few people who do not want to fight. But testimony from the regions, especially in western Ukraine, tells a different story.

“At least here mobilisation has been a total failure,” said Iryna Vereshchuk, mayor of the small town of Rava-Ruska, in the far west of Ukraine. “People don’t understand what they are fighting against. If it’s a war, why has no war been declared? Why are ordinary people being called up to take part in a fight against terrorists?”

Avoiding war
The government has avoided declaring a state of war, referring to the operations in the east as an anti-terrorism operation, despite clear evidence of Russian military incursion. Part of the reason for this is that Kiev would have trouble securing a much-needed support package from the International Monetary Fund if it was officially at war.

“Martial law would mean a lot of restrictions, including on freedom of speech, democratic freedoms and would have a lot of consequences. It would be the complete transfer of the country on to a military track,” said Ihor Lapin, a fighter with a volunteer battalion who is now an MP.

Vereshchuk said attitudes have hardened in her town as locals who went to fight returned in coffins. Of about 100 call-up papers meant to be distributed as part of the latest wave of mobilisation, only six had been handed out. In the other cases, the men had hidden or could not be found, she said.

“We still have diplomatic and financial links with Russia and yet people are saying we have to go and fight their troops and die,” said Vereshchuk. “If our region was coming under attack, people would take up arms, but they are not ready to go to the east and end up killing other Ukrainian citizens.”

The fear of conscription has been exploited by the Russians, with the president, Vladimir Putin, ordering officials to change laws to allow any Ukrainian men escaping the draft to stay in Russia for longer.

“Ukrainian citizens cannot stay in Russia for more than 30 days. After that they have to return to Ukraine where they are being caught and sent under the bullets again. That is why I think that we are going to change something in that law,” said Putin with carefully calibrated concern.

Psychological pressure
A series of gruesome videos, sometimes shown on Russian television, has increased the psychological pressure on Ukrainians. One, released last month, showed a rebel commander waving a sword in the faces of bloodied Ukrainian soldiers, slicing off their insignias and forcing the men to eat them.

If the videos are meant to intimidate Ukrainians, they are working. Add to that the inevitable swirl of wartime rumour. In Kiev, Andrei, a 24-year-old engineering student, says he hopes the war will finish before his 25th birthday, after which he could be called up.

“A friend of mine told me his friend was down there in the east and they ran into Chechens, who sliced off all their testicles. There were about 100 of them, and the Chechens castrated the lot of them. If I get called up, I think I’ll go into hiding. I want a family and kids.” – Additional reporting by Oksana Grytsenko © Guardian News & Media 2015

The BBC reported on Thursday that a deal aimed at ending the fighting in eastern Ukraine has been agreed, following talks in Belarus. The leaders of Russia, Ukraine, Germany and France announced that a ceasefire would begin on February 15. The BBC report said that the deal, which was also signed by pro-Russian rebels, included the withdrawal of heavy weapons from conflict areas and a range of other measures, such as an amnesty deal for rebel fighters.