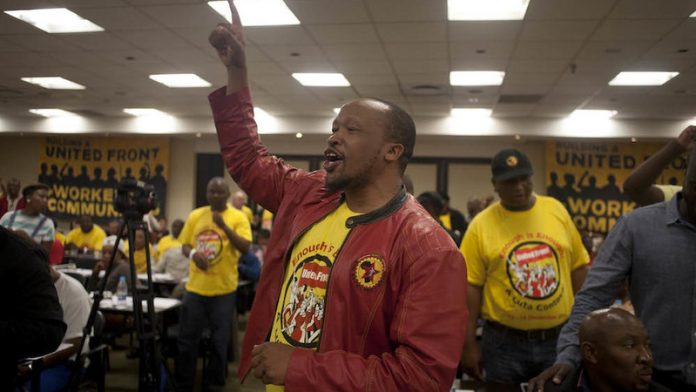 The seriousness of the problems South Africa faces is sinking in, especially after what we witnessed last Thursday. Our institutions are being destroyed and there is no real plan to deal with inequality. A credible electoral alternative – one that can create what Adam Habib calls “substantive uncertainty” among political elites – is vital if we are to get out of this mess.

The Economic Freedom Fighters (EFF) have been a breath of fresh air in Parliament, but their authoritarianism and crude approach to economics is potentially disastrous. It is the National Union of Metalworkers of South Africa (Numsa) and its United Front, which may in time become a workers’ party, that has captured the imagination of the intellectuals. But the initial euphoria about a credible electoral alternative – one rooted in the national liberation movement – has worn off, and critical voices are sounding serious notes of caution.

Political commentator Steven Friedman has pointed out that Numsa has not looked to popular organisations with mass constituencies when setting up its United Front. And another analyst, Ebrahim Harvey, has issued an even stronger critique. He points out that turning to prominent individuals to lead organisations does not automatically translate into mass support.

Harvey notes a serious weakness of the left: the tendency to form tiny groups, often at war with each other, that have an “inflexible and arrogant belief in the unshakeable truth of ideas in one’s head or on paper” and are “isolated from the mass movement”.

This is exactly what has happened in South Africa. Marginal groups such as the Workers and Socialist Party and the Democratic Left Front have not been able to connect effectively to mass struggle. These are the groups with which Numsa has made its alliance.

Harvey makes another crucial point, one previously made by Jane Duncan: that Numsa’s Irvin Jim’s “Marxist-Leninist” politics come straight from the Stalinist tradition of the South African Communist Party. This dogma, Harvey implies, has had no credibility since the 1980s. This is a key point. In a moment of global left renewal, especially in Greece and Spain, hanging on to the discredited thinking of Stalinism is a staggering blunder.

Harvey’s third point is that it is naive to assume that the mere act of announcing a United Front will lead to mass support. Achieving that will require taking ideas seriously, including both nationalism and the weakness of the Charterist tradition.

It does seem clear enough that the United Front is just not ready to get off the ground. If this proves to be correct, it will be necessary to return to the drawing board. When this happens, the recent experiences of the left in Greece and Spain need to be taken with the utmost seriousness.

In both cases the successful left that has emerged in these two countries did not emerge directly out of the social movements but found a way to accommodate itself to their language and to enable these movements to feel at home with them. This is not a left that is looking back to Stalinism and the Freedom Charter. It is a left that is engaged in the contemporary moment and looking to the future – something we sorely need in South Africa.

A first step towards building such a left would be to approach labour and community struggles with respect and an open mind, and to begin a process of building mutual understanding and respect.

The second would be for Numsa to give its active support to these struggles – in the same way that the EFF is already doing. Once this has been attained it will then be possible to start to think about building a United Front that has a real shot at being a serious player in our politics. But this, unfortunately, is a process that will probably take some years. Neither Syriza in Greece nor Podemos in Spain were overnight sensations.

In the meantime we have to endure loadshedding, mass unemployment, endemic corruption, a failed education system, atrocious rates of violence and the rapid destruction of institutions such as the revenue service, the Hawks and others. It’s not going to be an easy few years ahead.