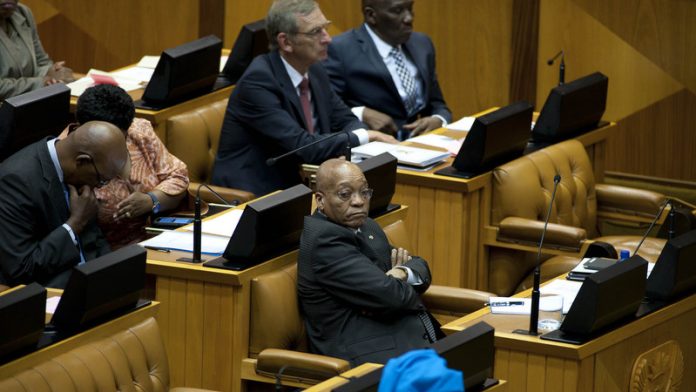 What started off as a fairly dignified sitting quickly turned into a howling match with hand gestures and a stand-off between the Economic Freedom Fighters (EFF) and Higher Education Minister Blade Nzimande on the second day of the State of the Nation address (Sona) debate.

The ruling party took the opportunity to regain the upper hand in Parliament yesterday, turning the tables on opposition party members who had used the podium the day before to pound President Jacob Zuma. Deputy Minister of Agriculture, Forestry and Fisheries

Bheki Cele, Justice Minister Mike Masutha and MP Dikeledi Magadzi tore into the Democratic Alliance and the EFF yesterday, taking turns to praise the president and to lament the behaviour of the two parties during Sona.

Borrowing the words DA parliamentary leader Mmusi Maimane used in his speech at Sona, MP Bongani Mkongi called EFF leader Julius Malema and Maimane “broken men” who tried to break the rules of the house to satisfy their broken egos. This was a reference to the EFF’s behaviour at Sona and the walkout by DA members.

“They come here on Tuesday to lecture us about the characteristics of a broken man. They suggest that you, Mr President, you are a broken man and that you failed to implement the Freedom Charter and lead our struggle for economic freedom,” said Mkongi.

Everyone is broken “These broken minds say ours is a broken society. It is a broken country with broken constitutional democracy. The way they are so broken, Mr President, they say all these things in the house that is democratically constituted. They participate in the periodic democratic elections in this country.

“All these elections were declared free and fair. When they are defeated in this Parliament they run to our functional and capable judicial system. “The principle of the separation of powers is alive in this country. They say all these things because their only mission in this Parliament is to attack and break the personality of the head of state.

“They are obsessed with one man: President Jacob Zuma. They are unable to provide a viable alternative to our people because they preside over broken organisations. They are playing the man instead of the ball,” he said to resounding applause from the ANC MPs.

The MP called Maimane a brokenhearted young man. “He is a broken young black man in the broken blue sea of white conservative males. He is utterly undermined. He does not have the support of his party, especially the conservative white males.

“We saw him last year breaking down in this Parliament after his instructions to the DA caucus was broken down and defied by his colleagues. He is a troubled man.”

Points of order galore
Tensions rose when Masutha said the presiding officers had a right to call in the army to deal with unruly behaviour, which led to fierce protests from the EFF and points of order from the DA.

EFF MP Mbuyiseli Ndlozi said Masutha was commenting on a matter that was sub judice and asked him to withdraw it. National Council of Provinces deputy chairperson Raseriti

Tau said they were not aware of the court action, but did ask MPs to refrain from referring to the actions of security men at Sona. This did little to deter ANC MPs during their speeches.

What was supposed to be a 20-minute speech turned into more than 40 minutes of heckling. The minister had to sit several times as EFF MPs took turns to raise points of orders. Malema at times shouted at Masutha to sit down during points of order.

Minister of Public Enterprises Lynne Brown delivered punch lines against the official opposition without breaking her stride. Her speech focused on energy and the electricity supply challenge.

DA MP Nqaba Bhanga, who was called a party hopper by ANC MPs, said more than 20 years later the country was still waiting for the ruling party to make good on its promise to address and remedy the injustices of land removals and dispossession.

“There is unacceptably high failure rates in terms of agricultural activity on land transferred through the land reform programme. Minister [of Rural Development and Land Reform Gugile] Nkwinti himself has put the failure rates at between 73% and 90%. “The agricultural sector is heavily indebted and is dependent on the provision of financial loans for its survival and growth.

“Destroy the value of the land on which debt is based and it will destroy the provision of finance. The emerging farmer will suffer as a result.”

“The taps that were installed in Khalimashe village last year are dry, like so many taps in so many other communities across South Africa.

“There is a water crisis in this country and the rural poor are suffering the most. For once be honest about the scale of the problem. The current ANC government has long forgotten that they are here to serve the people.”

African Christian Democratic Party leader Kenneth Meshoe used his time to condemn what happened during Sona last week, including the jamming of the signals, while Freedom Front Plus leader Pieter Mulder said the ANC were experts only in scapegoat politics.

The latter part of the debate turned into a roasting session again when Nzimande laid into Malema, which led to the fighter standing and proclaiming that he was not afraid of the minister.

Nzimande also asked the DA never to wear black in the house again, as it caused his grandchildren to have nightmares.

Yesterday, the DA said it had filed papers in the Western Cape high court following last week’s removal of EFF MPs from the National Assembly during Sona.

DA federal executive chairperson James Selfe said they wanted section 11 of the Powers, Privileges and Immunities of Parliament and Provincial Legislatures Act removed, which allowed the speaker to order the removal of anyone who creates a disturbance during a sitting.