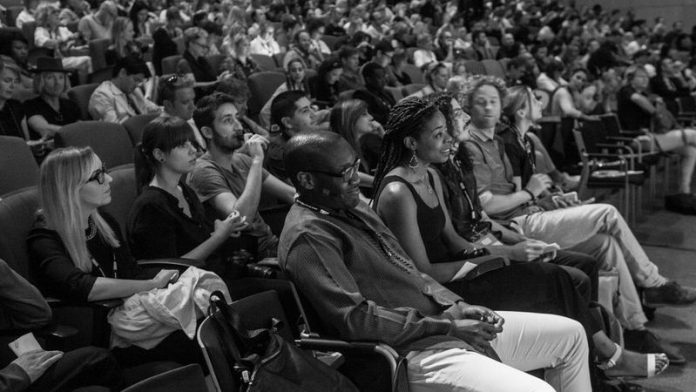 These are the words that open Larry Harvey’s presentation. And from his talk, it is these words that the cofounder of the annual Burning Man festival had in mind when starting the event. The Nevada-based Burning Man, which was birthed in 1986 in San Francisco’s Baker Beach, is “a community not an event,” he insists while adding that it was created using a bohemian and “giving” approach. “In a world where everything is commodified, commercialised and over-mediated … we took the idea of bohemia [and created Burning Man].”

And almost 30 years later, “we took a scene and turned it into a city,” Harvey enthuses while projecting aerial images of the Black Rock Desert in Nevada, where Burning Man migrated to in the early 1990s and which essentially became a city from the rise of people that the event had attracted over the years. In 1997, he became a cofounder of Black Rock City, which is the festival’s managing organisation.

“Burning Man is now a global force for creative culture on six continents and in more than 50 countries, and growing,” according to the Design Indaba. With its growth (it is now at $30-million), Harvey highlights to the audience that the larger-than-life artwork created at Burning Man is used as a social adhesive, and has a purpose. “We have made art with a social purpose; people actively engage with it.”

Naeem Biviji of Nairobi-based Studio Propolis shares with the audience how his company, started in 2005 with his wife Bethan Rayner, were tasked with creating a cathedral in Kenya’s capital. In so doing, it highlighted their working ethos and their flexibility and inclusion of certain materials, such as timbre.

While creating prototype furniture to be created for the cathedral, Biviji – who holds a Masters in Architecture from the University of Edinburgh – realised how being inclusive, and accommodating others and materials, creates a sort of organic creating space. “Negotiating tolerance… [and] tweaking tolerances  [are just] some of the points you have to experiment with before building,” says Biviji while presenting his slide titled “Working with others”.

After screening how Studio Propolis painstakingly handmake chairs, by bending the wood, smoothing down the material and then presenting it, Biviji shares how his company allow manufacturers to tweak and adapt their designs. “Theres nothing new in the way we work, but the most important [part of our approach] is that we’ve become more tolerant.”

According to him, Studio Propolis has bridged the difference between machine and handcrafted goods, “we’ve made a way for the two to exist.”

One of the global design graduates/ Pecha Kucha – his design was striking: Ackeem Ngwenya

Opening the talk, the South African-born, Malawi-raised Ngwenya projected an image of the socioeconomic pyramid. Wealthy at the top, middle class in the middle and working class at the bottom. while doing this, he shared that a lot of the design world’s focus is on those who populate the middle and top of the pyramid.

“In my design practice, I turn the [socioeconomic] pyramid upside down” to remedy social problems, he says. “Collecting water/crops is part of everyday life,” Ngwenya adds, while looking to rural Malawi. Ngwenya feels that a tar road network can improve living conditions in these parts, however, he feels that government corruption and the expense of roads might slow down the process of improving rural Malawi.

So, as a result, for his graduation project, Ngwenya – who last year completed his master’s degree in innovation design engineering from the Royal College of Art and Imperial College London – created the “roadless wheel”.

His project “had the potential to help people in the place I grew up”, he says. According to Design Indaba, “The wheel’s design addresses the difficulties locals experience moving goods, accessing markets and making a living.”

During his talk, the University of Stellenbosch bachelor’s graduate, says that the wheel he is still working on thanks to private and crowdfunding aims to be used on all types of terrains, from muddy to sandy. But finding the right material has been a challenge.

And the combat bad roads] for rough terrains, and muddy and sandy terrains. material was a challenge. Used crowdfunding and private funding.

Creativity with a purpose: The core of the presentation by Joe Public, is that design needs to have purpose. Their purpose is to draw attention to some of SA’s social issues.

Joe Public stands behind having a social impact in their campaigns.

They have worked on HIV awareness projects through the Brothers for Life NGO campaigns, where they created awareness around the many people dying from HIV/Aids through Twitter, which they didn’t “spend a penny” for.

They also partnered up with Nike to start the Run Jozi marathon, where people run through the JHB CBD at night and “Take back their city” from a crime. The ad was aimed at breaking stereotypes attached to downtown JHB; stereotypes such as JHB is not safe to walk around in. Who would dare walk there? Let alone run there.

Joe Public, announced its latest campaign in partnership with Nedbank, a brand they’ve worked with before on the “be more savvy with your money” campaign. Joe Public and Nedbank have set up idea ATMs in the foyers at the Design Indaba conference 2015. The idea is to have the public deposit ideas on how to solve South Africa’s social issues.

How it works: You’ll get an envelope, in which you put your ideas in. You then deposit that idea.

Can an ad agency change the country? This is a question posed by the Joe Public team – a question they hope will soon be answered by the public’s response to their Idea ATM campaign.

The relationship between objects and humans

Jongerius is a renowned Dutch industrial designer and product designer known for her “inventive approach to products”. She brings “soul” to design.

For Jongerius, design is not about objects themselves but about the relationship you have with the objects and good design is “about creating a lasting relationship between an object and humans.” This is the value she works by. Having an overflow of clients is not what is important to her, but maintaining those relationships with the few clients you have, is what matters to her.

“They are rare breed of designers. They can’t be stopped, they can’t be reasoned with”, this is how the digital product design studio, The Workers, was introduced right before designers, by Ross Cairns and Tommaso Lanza, walked onto the stage of Design Indaba 2015 in Cape Town. Cairns and Lanza are the co-founders of The Workers.

Their most notable project is After Dark, which was a collaboration with Tate Museum Britain. The idea was to digitally enhance art exhibitions. They set up robots in the museum that only operate after dark when the museum closes for the night. In a creepy way, the public can remotely operate the robots from wherever they are base. The robots then move around the gallery, showing the viewer (from wherever they are) the different artworks on display inside Tate Museum. The project had an overwhelming response from the public. After Dark ended off with 500 robot operators.

The Workers are aware that they are not the only people in this industry, who are making strides with technology, but what they have managed to do, is to find a gap between digital technology, art and the public, and bridge that gap in a fun interactive way.