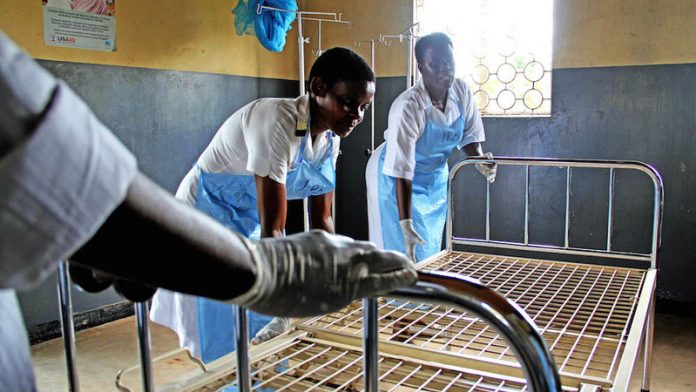 Since his childhood days in northern Uganda, Geoffrey Orijabo wanted to be a nurse “because of the ignorance”. “I saw children and women dying because there were few health workers [and] they were treating me using local herbs,” said Orijabo (34), the first of five children born to peasants in “total poverty” in Arua.

“I said, let me go to medical school, then I’ll come back to save them.”

After secondary school studies Orijabo put himself though Mbarara University in western Uganda, completed a year-long internship at Mulago National Referral Hospital in Kampala, and practised at Mbarara public hospital.

Yet since 2007, the nurse, who specialised in maternal health, an area in which Uganda ranks disastrously, has been “floating”, unable to find full-time work, a problem faced by thousands of other qualified professionals in the East African nation.

Uganda has admitted that it is difficult to retain senior medical staff, as there are too few resources. About 42% of health positions remain unfilled in the public sector.

Now Orijabo believes he has “no choice” but to leave his family for Trinidad and Tobago, a country some 10 000km away in the Caribbean, under a controversial “export” plan facilitated by the Ugandan government.

“It was a blessing,” said Orijabo about seeing an advertisement last March in Uganda’s pro-government newspaper, New Vision, for Ugandan health workers to take up employment in Trinidad, to “accelerate the existing excellent bilateral relations” between the countries.

Attractive package
“There was nothing to think about,” added the medic, who applied immediately for a position, which Uganda’s foreign affairs ministry promised came with an “attractive” salary, a gratuity of 20% of gross earnings, free flights and housing, plus other perks.

But now Orijabo, whose name is on a shortlist of 283 professionals that includes midwives, anaesthetists, radiographers, gynaecologists, paediatricians and surgeons among others, may be blocked from upping sticks.

In what they claim is one of the first public interest litigation cases on medical “brain drain”, Ugandan think-tank the Institute of Public Policy Research (IPPRU) has taken the government to court.

It is asking for the final preparations for the “imminent” deployment of their country’s health workers to Trinidad to be halted. The institute says the “export” would be “futile” and breaches the constitutional and legal obligations Uganda has to its citizens.

The institute’s executive director, Justinian Kateera, said they did not have an issue with doctors leaving Uganda of their own accord but “with government officials effectively withdrawing health services from Ugandans for the benefit of Trinidad and Tobago, knowing thereby that we will die”.

“It is different if a government official, whose sole mandate is to protect the citizen’s interests, decides to undermine their health by diverting resources to Trinidad, which has 10 times as many doctors,” he told the Mail & Guardian. Based on World Health Organisation figures, Trinidad’s doctor-to-patient ratio is 12 times better than that of Uganda.

“The teachers that have gone to South Sudan or Rwanda or wherever have gone privately,” added Kateera. “It’s an odd thing to do that. No one has ever done it before.” He said the biggest public threat to Africa was a “very weak health system” without human resources to deliver life-saving drugs.

The recent Ebola outbreak in West Africa, a region also plagued by a shortage of medical professionals, was the greatest example of the danger of a health system without “the human resource that diagnoses, prescribes, performs surgeries and monitors progress”, said Kateera.

Then there is the lost “investment” of locally educated doctors who leave for developed countries. A 2011 British Medical Journal report by Canadian health experts on doctors migrating from sub-Saharan Africa to Australia, Canada, the United Kingdom and the United States found South Africa suffered the worst from this economically.

Setting a precedent
“This case is very important in setting a precedent on the medical brain drain, whether it’s in Malawi, South Africa, Ghana, Zambia, Zimbabwe, India, the Philippines or the Caribbean,” said Kateera, ahead of an injunction ruling scheduled for March 2 in Uganda’s high court in Kampala.

“We want this to be the starting point at which we have a broader discussion on how to stem medical brain drains and reform healthcare.”

As he waits to see whether he will be able to go to Trinidad, Orijabo admitted he would “definitely prefer” to stay at home with his wife and two children, aged three years and six months.

Orijabo doesn’t know of any “direct benefit” the Ugandan government will gain from the “export”, although activists opposing it have claimed those shortlisted, some of them not even qualified health workers, have paid money to various officials. Orijabo said he has “not paid anything to anyone”. Uganda’s ministry of foreign affairs is adamant the process has been “transparent and fair”.

IPPRU points out there is no bilateral arrangement between Uganda and Trinidad, although the latter has vowed to train Ugandans in oil and gas and reportedly gave Uganda’s police force money. According to a September 2014 news story from Uganda, Trinidad has trained 103 Ugandan students and 11 instructors in oil and gas technology. In December 2014 it was reported that the Ugandan police force got 27-million shillings from Trinidad. The Ugandan government did not comment.

According to the advert by Uganda’s ministry of foreign affairs, the “export” deal between Trinidad and Uganda will also “strengthen” Trinidad’s health services sector.

A big issue in re-election
As Ugandan President Yoweri Museveni campaigns for re-election in 2016, health will be a big issue, according to research by Columbia University and the Coalition to Stop Maternal Mortality in Uganda, which last year found a quarter of voters believe it is the top national priority.

“Rather than helping Trinidad poach Uganda’s health workers, Museveni’s government should be delivering on its campaign pledges to increase the number of health workers in the public sector and increase workers’ salaries, so they stay in Uganda and are motivated to work for the people,” said Asia Russell, executive director of Aids advocacy organisation Health Global Access Project.

“These problems are fixable but only if government considers an epidemic of preventable Ugandan deaths a political priority.”

Orijabo isn’t upset about the legal challenge but insists the activists are not addressing the real problem. “Health workers are not recruited and kept in the health facilities,” he said. The nurse said whether he goes to the Caribbean or another African country, he was determined to find a better opportunity so he could support his family from outside Uganda.

“Sudan … Congo, there is Rwanda,” he said. “The next time you come to [talk to] me, I may be leaving for Sudan. The issue is poverty. I am not getting money to help my people. Staying near my family when they’re hungry is more stressful than me going away.”