Communities left up the creek with dirty water 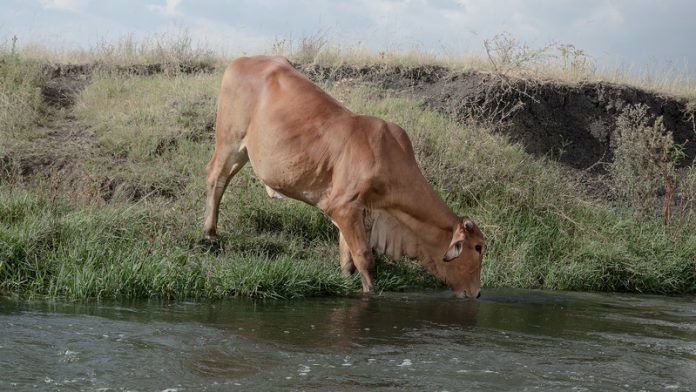 The brown and white Nguni cow can barely lift her head. Her jaundiced eye watches us through the green grass as we approach, a mess of yellow liquid oozing out of the socket. The congealed mess where the other eye should be is covered in flies. Her skin clings to her ribs, as if wrapped over hollow lattice.

“She spent too much time in the river. She used to love sitting in the water,” says Peter Khumalo, pointing at the deep trench cut by the turbulent Klip River. The water has a white froth and is dirty grey. “Then she started getting sick. It happens to all the cows that spend too much time near the water.”

He employs a herder to keep the cows away from the Klip, except when they leave the river’s grass-covered floodplain and descend the 2m river bank for water.

Walking back through the veld to his piggery, the broad-shouldered Khumalo cannot resist smiling when he talks about his operation. “I started with a handful of pigs and learnt from others. Now I have 100.”

His sties lie between Lenasia and Thembelihle, to the south of Soweto. The rambling walkways and pens are only 400m from the Klip, but he tries to get most of his water from a solitary tap in his yard. This often dries up and he has to fill buckets from the river. “We know the water makes the animals sick, but when there is no water there is no choice.”

Walking through a thin layer of mud and faeces in heavy boots, he stops at an emaciated calf. Lying in a cool corner, it does not acknowledge us. “That one is the calf of the sick one outside,” he says while moving some bread lumps closer to her with his foot. These are chopped up loaves of white bread that he stores in ceramic baths. “She never had a chance,” he says, because the mother drinking the water poisoned her unborn calf.

Supplements and medication
To get the pigs and cattle to market – a 120kg pig sells for R2 200 – he has to buy supplements and medication to fortify them against getting sick. “Having the milky water means so much more in costs and your animals just die when they are young,” he says, taking his camouflage-coloured baseball cap to wave off a mass of flies around some pink piglets.

His piggery is a few kilometres downriver of the Olifantsvlei wastewater treatment works, which feeds the wetland which is the source of the Klip River. The Shembe church and other churches use the water in ceremonies, he says.

A green band of grass and willows traces the Klip’s path under the N1 as it heads south to Bloemfontein, before flowing into the Vaal River below the Vaal Dam. The dam supplies most of the drinking water for Gauteng and the rivers are the de facto supply for people who have water infrastructure but it does not work. This informal water is not being tested by the department of water affairs, even though it is one of its mandated tasks. Several sources said the department had cancelled the contract with the laboratory testing the water. It has not confirmed this, even when asked questions in water forums and meetings. It would also not officially confirm this to the Mail & Guardian and did not respond to questions. A senior official at Gauteng water affairs did, however, say “the high cost” of testing had necessitated cancelling the previous contract. A new one was being delayed because of “endless red tape” in government procurement processes.

This is a complete failure in planning, says Mariette Liefferink of the nongovernmental Federation for a Sustainable Environment. A tall woman with intensely blonde hair, she arrives at any meeting wheeling a bag of documents to support her case. “Whenever we ask for water quality tests, we are either told they are not available, or we are given ones from 2013.” This is when the contract was cancelled, she says. Her speciality in the last decade has been raising awareness about acid mine drainage and water issues in the West Rand of Gauteng. “What has happened is that the department has externalised the costs of testing to civil society.”

She sits on dozens of water forums and catchment agencies and says information about water quality has dried up. “Where Rand Water is working there is information, but outside of that there is no testing, so we have no way of knowing what is in the water on a consistent scale.”

Baptisms
The worst affected are people who have no clean source of water – especially for their cattle – and those using water for baptisms, she says. “People are constantly using the water and we know it makes them sick, but there is a constant denial from government.” To compound the problem, there are few other groups doing province-wide testing on water quality. The province’s rivers are affected by a combination of dirty water from mines, wastewater treatment plants and human pollution, she says. “There are so many sources of pollution that it is irresponsible to not test every single water source so we can trace any problems back to their source.”

Professor Frank Winde, chair of geography at North-West University, has spent his career studying the effect of acid mine drainage on river systems in the area. His interest is personal, as the Wonderfonteinspruit flows from an area of intense acid drainage towards his campus in Potchefstroom. It is one of the rivers not being tested and he has found “extremely large volumes of uranium” in river water all along the spruit. At some points these are 1 000 times above the recommended levels set by the World Health Organisation. This classifies uranium – and the other heavy metals released by mining – as being toxic to human beings. These damage the functioning of the brain, attack the structure of DNA and are serious endocrine disruptors, it says.

Heavy metals affect people’s health in the long term, but the water coming from faulty wastewater plants makes people immediately sick. In numerous visits to communities throughout Gauteng over the course of three years, the M&G found that it is normal for residents outside the city centre to rely on informal water sources. These tended to make them sick. The last Green Drop Report on the quality of wastewater works – a new one has been delayed by two years – found that works in the province were running beyond capacity and, as a result, sometimes released untreated water. The Olifantsvlei plant upriver of Khumalo’s piggery passed the Green Drop because of its operational plans, but was rated as “vulnerable” to failure because it was running at 110% capacity.

Rand Water runs three laboratories in Gauteng which it says test the quality in water treatment works and effluent coming out of wastewater plants. The City of Johannesburg says: “The streams and rivers in the city are regularly sampled by the city’s regional environmental health staff.” They report back to the City, which acts if there are problems in water quality. An official at Rand Water says their tests are presented at the appropriate forums and are kept up to date. Beyond that, water is the responsibility of the national department of water.

For Khumalo the pig farmer, this means he can’t complain about dirty water. Nobody will tell him what is wrong. “If we had tests we could force change but we are told they do not exist.”

In Africa, more people will die as a result of what we are doing to prevent Covid-19 than will be saved by doing it
Read more
Coronavirus