Mining a threat to holy caves 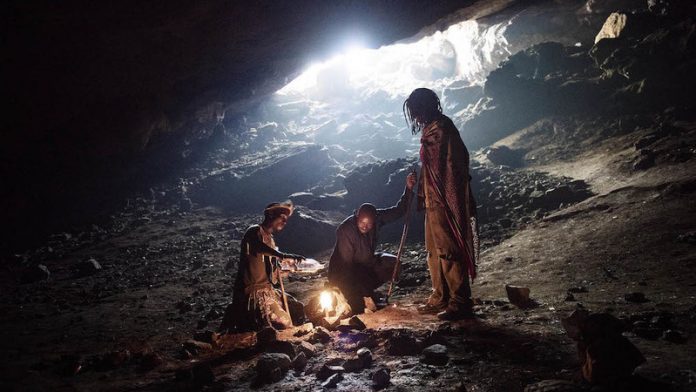 The roots of the tree seem to hold open the earth. A rusty sign warns of “cave fever”.

This the mouth of the Madimatle caves, 30km down a gravel and dirt road from Thabazimbi in Limpopo. People have been coming here for more than a century to pray, but now there are plans to mine the area for its iron ore.

Madimatle means “pure blood” or “royal blood” in Setswana. The caves, also known as the Gatkop caves, stretch for kilometres to the closest mountain, Madimatle.

Australian-owned mining company Aquila Steel South Africa has plans to mine the mountain.

Hearings were held by the South African Heritage Resources Agency (Sahra) last year at which it ruled that exploratory mining activity near the mountain and the caves must be halted for two years while it decides whether the area merits national heritage status.

Aquila Steel plans to appeal the agency’s decision, and argued at the hearings that the caves are significant, but not the mountain.

The opening to the cave and a clearing where visitors sleep and cook on fires has been fenced off. There is also a portable toilet. The gate is easily lifted, allowing people to slip in.

Hundreds of people are said to have died in the caves in the early 1800s. Ancestors sought refuge there during the Mfecane and in battles between Africans, the Boers and the English, according to Sahra. It is believed the blood of martyrs cleanses the sins of those who visit the mountain and caves.

John Ndlovu (58), a traditional healer dressed in cheetah skins, is sitting on a fold-up chair under an acacia tree when we arrive. He lives in Hammanskraal near Pretoria and says he has visited the caves for 35 years, and was first told to do so by an ancestor in a dream.

He says he had not wanted to come to Madimatle at first, but then found himself increasingly praying for others.

“I prayed and I prayed and I saw many things for the people. I just asked for life for everybody, and in asking for others I got something back too.”

Ndlovu walks with us to the edge of the hole. We pick our way down the slope, under the tree, its roots embedded in the rock above us, into the mouth of the cave. Here Ndlovu prays in isiZulu for permission for us to enter.

Inside, the cave seems huge – at least two storeys high and 50m long. Guttering candles have been placed in a rock niche, illuminating two people, whom we later found out had been sleeping and praying in the cave for two weeks.

This is the first of the network of caves that are said to stretch for kilometres to Madimatle Mountain.

Leaning heavily on a spear he uses as a walking stick, Ndlovu says he is training his son Moses, and another long-time visitor to the cave, Jackie Kwele, to be his assistants. “If I die I have to have someone to replace me.”

Gesturing with his spear, Ndlovu points to the back of the cave, at a small hole at the top of a rock face that leads to the warren of caves beyond. “I am too old to go there anymore.”

He admits that he sometimes goes alone deep under the mountain to pray. “Sometimes I just stay in the first cave and pray at the stone where you can speak to your ancestors,” he says, adding that most choose to stay in this cave.

He says people who come to pray in the caves see the mountain as a link to heaven.

Ndlovu says the caves stretch for kilometres and there is a subterranean river that will have to be crossed. A rusting sign outside the caves warns of gatkoors (cave fever) a disease of the Histoplasma capsulatum fungus, which is often found in soil, and is associated with bat guano.

“I do not like to take people over the river that runs through the caves; some people do not come back.”

It is a Thursday night, and there are more than a dozen people at the cave. Some pray just inside the first cave and others make their way deeper into the earth.

Another visitor introduces himself. He is John Gune, also from Hammanskraal, and he says he had heard about the plans to mine the mountain. “If this area is destroyed, where will be go to find our ancestors?”

He had brought his sick son to the cave in January. “When he arrived he was just lying in my arms, but by the time we left he was running around fine.”

People also come to the caves to pray for the country’s wellbeing and for President Jacob Zuma, says Ndlovu. Ahead of the last elections a number of people gathered there.

The next morning Ndlovu and Kwele get ready to leave. Just outside the cave they pray at a flat rock. Richelieu brandy and snuff are offered to the ancestors in thanks for their assistance and for protection on their journey home.

“You must come back to give thanks if your prayers have been answered,” Ndlovu says.

“If they tell you to come, you must come,” says Kwele, a large, silent man who claims Madimatle saved his life. “I was sick and two wives had left me when I finally came here. I wanted to know why it was happening to me.”

He now owns a thriving bottle store in Brits and is happily married.

Law firm Werksmans is representing the Traditional Healers Association, which has more than 39 000 registered healers, and the Kara Heritage Institute in their efforts to protect the mountain and caves.

‘A matter of human dignity’
Werksmans lawyer Louise Bick says game farmers had approached them, concerned by the effect an open-cast mine would have on their livelihoods. She says they had then learned of the mountain’s cultural significance. “It’s a matter of human dignity and the importance of preserving a place of historical and cultural significance to the people.”

All those opposed to the mine say the mountain cannot be rehabilitated. Aquila says in its submissions that the mountain does not have cultural significance and it has promised to provide infrastructure for those visiting the caves.

Mike Halliday, who manages Aquila Resources in South Africa, says the company was preparing its appeal against the Sahra application. “Because of the complex and sensitive nature of the matter, Aquila has engaged expert assistance to help with responding to Sahra’s decisions.”

Grace Masuku (83), an environmentalist and community worker who lives in the Pilanesberg, says there are many sacred places in South Africa; many are now gone. She says that “many people who come to these places just see a mountain. They do not see our health, wealth or the future of our grandchildren.

“I do not think that people who are not us have bothered to understand African spirituality. It is something so deep and so special and it is everywhere, in the plants, the clouds … When I am gone I want to visit my grandchildren.”