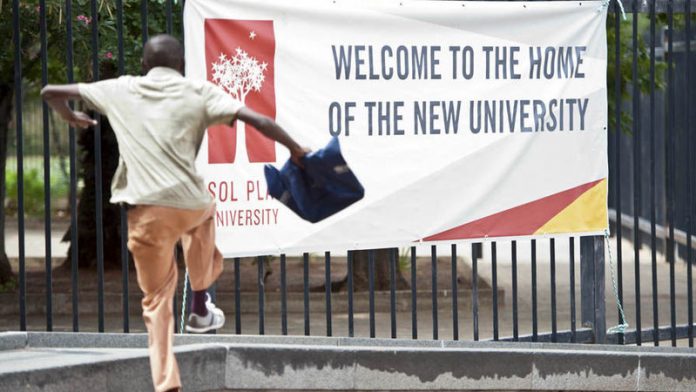 Construction continued and there were problems with accommodation. But pioneering students at the Northern Cape’s first university, which only opened last year, got the highest marks of all first-year students in the country.

The excitement surrounding Sol Plaatje University in Kimberley did not however shield it from the student funding struggles that many universities suffer each year.

“The first group of 125 students that registered in 2014 performed exceptionally well. With academic quality oversight from the University of the Free State and Cape Peninsula University of Technology, 80% of students passed all their first-year courses, with an average course pass rate of 87% – the highest academic performance of first-year university students in South Africa,” its interim head, Yunus Ballim, said on Tuesday.

Second-year student and deputy president of the student representative forum, Portia Mampe-Buk, said the students were “very proud of themselves”.

“We got good marks because the lecturing is good and the involvement of management is good. You can say that, when comparing our marks to other universities, it’s easier for us to get good marks because we have small classes, but then we also had other challenges that come with a brand new university, like construction and coming up with rules for students,” she said.

She said most of the students in the first intake came from disadvantaged backgrounds.

Filling the need
The university opened its doors to its first intake of 125 students and nine academic staff members in February last year, with the help of a R75-million investment by the department of higher education and training.

On a visit to the campus in its first week of lectures, the Mail & Guardian discovered bright, new lecture venues still dusty from construction, and staff members working in offices full of boxes.

Since then the university has grown to accommodate 335 students, 30 academics and 25 support staff – and the department has allocated R7-billion to be spent on the facility over the next 10 years.

Despite a long-standing shortage in places at universities, Sol Plaatje almost did not get off the ground.

Some universities also offer diploma studies. There were, however, only 204 522 places for new entrants at the country’s 26 universities.

The Council on Higher Education, whose statutory function is to advise the minister, still argued in 2011 against establishing a university in the Northern Cape. The following year, Nzimande told Parliament why he ignored it.

Prestigious programmes
The council “had not considered the possibility of a substantial university in the Northern Cape with unique flagship programmes that would attract students from across the country as part of an integrated national university sector”, he said. It “therefore considered the new institution from a narrow provincial perspective.”

And those unique programmes have now started to bloom.

Last year, the university only offered diplomas in information technology and retail management, and a bachelor’s degree in education. This year it is offering a new degree, a BSc in Data Science – the “first university in Africa to do so”, Ballim said.

“This is to prepare the intellectual capacity in the Northern Cape to deal with a future world of ‘Big Data’ and the Square Kilometre Array project.”

The university was also approved to offer a higher certificate in heritage studies, which Ballim said was the first in South Africa.

“It is intended to develop the young minds that will increase the Northern Cape’s ability to tell its own story, and to interpret its own archive,” he said of the certificate.

Ballim said that he applied for – and was offered – the position of vice-chancellor of the university, and will start his five-year term on April 1.

Guiding the university through its inaugural year was “tough”, he said.

Lack of funding
Some construction deadlines were missed, and students had to be accommodated in private residences.

But the year ended with its biggest low: “Our inability to attract sufficient bursary funding for our students.

“Although sufficient offers of study places were made, around 50 students indicated that they were unable to register in 2015 because of a lack of financial support for their studies,” he said.

The M&G reported two weeks ago that the University of Johannesburg, as one example, said NSFAS had not allocated the university enough funds for 4 378 of its students who qualify for loans.

But while the battle for more student funding continues, Sol Plaatje is going ahead with its plans to expand its two campuses.

Ballim said the university had started about “R850-million worth of new construction opposite the William Pescod School campus (the education campus)”.

Intellectual culture
Ballim told the M&G last year about his vision for there to be a “hub of culture around the university”. His vision is taking form, he said this week.

In 2014 “we hosted three popular public lectures on the science and implications of fracking in the Northern Cape. Each lecture was attended by about 120 members of the public and our students – with much interesting discussion thereafter”.

“We would like to see the university precinct in the city as a place where young people come to rather than leave from for high intellectual entertainment. We are forming partnerships with neighbouring businesses and institutions to develop this inner city culture.”

Mampe-Buk said students liked the public lectures but would appreciate entertainment of a different sort.