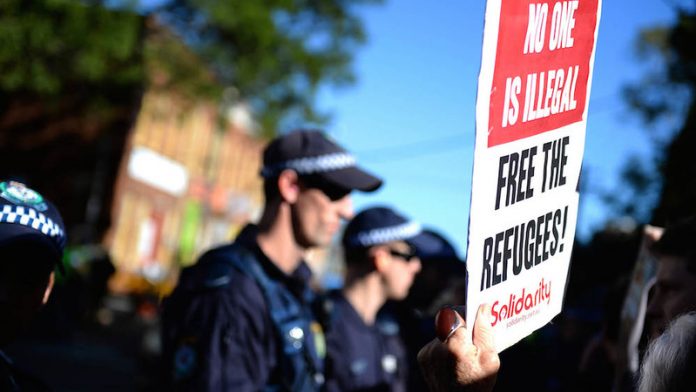 Australia is systematically violating the international Convention Against Torture by detaining children in immigration detention and holding asylum seekers in dangerous and violent conditions on Manus Island, a United Nations report has found.

But the prime minister, Tony Abbott, reacted angrily to the scathing findings, saying Australians were “sick of being lectured to by the United Nations”.

The United Nations special rapporteur on torture, Juan Méndez, has investigated allegations of torture and abuse in 68 countries, in a report to be delivered to the UN Human Rights Council on March 16. The section on Australia is concerned entirely with the treatment of asylum seekers in immigration detention.

“The government of Australia, by failing to provide adequate detention conditions; end the practice of detention of children; and put a stop to the escalating violence and tension at the regional processing centre, has violated the right of the asylum seekers including children to be free from torture or cruel, inhuman or degrading treatment,” Méndez’s report said.

Two asylum seekers on Manus Island, referred to as Mr A and Mr B, allege they were tied to chairs by security staff for “becoming aggressive” and threatened with “physical violence, rape and prosecution” if they refused to retract statements they had made to police about the murder of Reza Barati during detention centre riots.

Barati was a 23-year-old Iranian asylum seeker who was killed in violent clashes at the detention centre on Manus Island on February 17 last year. Méndez’s report found those men’s rights were also breached.

Substance in allegations
“The rapporteur concludes that there is substance in the allegations presented in the initial communication, reiterated above, and thus, that the government of Australia, by failing to provide any additional information or details of the investigation into Mr A’s and Mr B’s allegations, has violated their right to be free from torture or cruel, inhuman or degrading treatment.”

“The Migration and Maritime Powers Legislation Amendment … violates the Convention Against Torture (CAT) because it allows for the arbitrary detention and refugee determination at sea, without access to lawyers. The Migration Amendment (Character and General Visa Cancellation Bill) violates the CAT because it tightens control on the issuance of visas on the basis of character and risk assessments.”

When asked about the report on Monday, Abbott said the UN’s representatives “would have a lot more credibility if they were to give some credit to the Australian government” for stopping dangerous boat journeys by asylum seekers.

“I really think Australians are sick of being lectured to by the United Nations, particularly given that we have stopped the boats, and by stopping the boats, we have ended the deaths at sea,” the prime minister said during a media conference in Western Australia.

“The most humanitarian, the most decent, the most compassionate thing you can do is stop these boats because hundreds, we think about 1 200 in fact, drowned at sea during the flourishing of the people- smuggling trade under the former government.

‘All basic needs met’
Asked again whether he accepted the UN’s findings about Manus Island, Abbott said the conditions were “reasonable under all the circumstances” and “all of the basic needs of the people on Manus Island are being met”.

“Everyone’s needs for food, for clothing, for shelter, for safety are being more than met, thanks to the good work of the PNG [Papua New Guinea] government, the Australian government and the people who are running the centre,” he said.

Abbott’s criticism of the UN follows his claim that the Australian Human Rights Commission, and in particular its president, Professor Gillian Triggs, acted in a “blatantly partisan” way with its inquiry into children in immigration detention. The immigration minister, Peter Dutton, has also been contacted for comment on the UN report.

The 31-year-old United Nations Convention Against Torture and Other Cruel, Inhuman or Degrading Treatment or Punishment is one of the most widely supported conventions in the world. Some 157 countries have signed the convention. Australia ratified the treaty in 1989 and is legally bound by it.

“Under international law, Australia can’t lock people up incommunicado on a boat somewhere in the middle of the ocean. Nor can we return people to a place where they face the risk of being tortured. Yet these are precisely the powers the government has sought to give itself through recent amendments to maritime law,” Webb said.

Australia relied on international law to protect its own interests, he said. “So it’s incredibly short-sighted for the government to start thumbing its nose at the UN system just because it doesn’t like what it’s being told.”

Ben Pynt from Humanitarian Research Partners said the government was attempting to sweep torture allegations “under the rug”.

‘Attempt to discredit’
“The prime minister has attempted to discredit the special rapporteur on torture, in the same way as he attacked Professor Triggs, as biased and disreputable. What he did not do is counter the evidence provided or in any way attempt to disprove the allegations of torture, which the global authority on torture found to be substantiated.”

The special rapporteur’s report addresses allegations of torture and inhumane treatment in 68 countries. It criticises, as well, the United States for holding a mentally ill man on death row for 30 years, and raises concerns with the United Kingdom over several proposed deportations.

Papua New Guinea did not respond to inquiries from the UN over its handling of the Manus Island detention centre. Australia is currently actively lobbying for a seat on the UN Human Rights Council (UNHRC) in the ballot to take place in 2017.

The foreign minister, Julie Bishop, said Australia’s bid was “consistent with our nation’s history of promoting and protecting human rights”. “We abide by our international obligations and we are confident that our experience and our commitment to human rights protection and promotion makes us a strong contender for the UNHRC.”

Shadow minister for immigration Richard Marles described the prime minister’s attack as “absurd”. “Instead of launching a cheap attack on the report’s author, Tony Abbott should be providing an assurance that all the processing facilities Australia funds are run in a safe, humane and proper manner.” The last Labor Party government reopened the Manus Island detention centre in November 2012.

In response to the prime minister’s comments, Méndez told ABC Radio in Australia that the UN Human Rights Council – to which Australia is seeking election – was only doing its job. “I’m sorry that he considers what we do lecturing. We don’t: we think it’s our role,” Méndez said. “We treat every country the same way. We just try to uphold international standards as we understand them.”

Méndez said he paid credit to Australia for its “robust, democratic system with guarantees of human rights for everybody”. “But it is my mission, my duty, to point out when any country, including Australia, falls short of its obligations under international law.” He said the lengthy, arbitrary detention of asylum seekers, simply because they had arrived by boat, was “not a good course of action”.

Méndez is professor of international law at the Washington College of Law, American University, in St Louis, Missouri, and was formerly special adviser to the prosecutor of the international criminal court. In his native Argentina, he represented political prisoners against the military dictatorship and was himself targeted by the regime.

Méndez was arrested and tortured – including with electric shocks and having the barrel of a gun put in his mouth – and was detained for 18 months. He was ultimately expelled from Argentina. – © Guardian News and Media 2015