The word is out: Pratchett lives 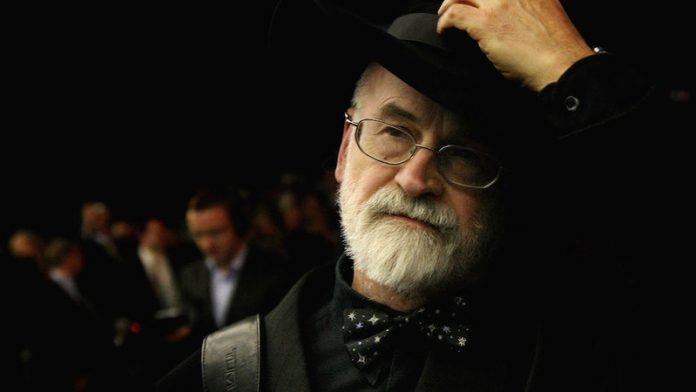 “A man’s not dead while his name is still spoken,” wrote the late Sir Terry Pratchett in his novel Going Postal. Now some of Pratchett’s programmer fans have created a thread, GNU Terry Pratchett, on Reddit, using the clacker code elaborated in the novel to ensure the writer’s immortality in the ether.

That kind of mass affection bordering on obsession enfolded Pratchett, who died on March 12, almost since the appearance of his first Discworld novel, The Colour of Magic, in 1983. Long before that, Pratchett, born in 1948, had begun writing during his Buckinghamshire schooldays. When he left school, he worked as a journalist on a small local paper, and later as media spokesperson for an electricity generating board – which, if it was anything like Eskom, may well have fed his taste for comic fantasy.

Although Pratchett wrote other books and tales, in other genres, it is his Discworld series (currently standing at 40 books, with another to come later this year) with which he is most closely associated. The books have sold more than 85-million copies worldwide. The Discworld – resting on the backs of four giant elephants, themselves standing on the back of a monstrous turtle swimming through space – may be one of the most ambitious and epic world-building edifices ever achieved by a speculative writer.

Pratchett detested that and other synonyms for his genre, describing himself proudly as a fantasy writer and vigorously engaging with the disguises, particularly magical realism, he believed some other fantasy writers adopted for enhanced literary status.

The late 1970s and early 1980s were an important time for fantasy in the United Kingdom. The Hitchhiker’s Guide to the Galaxy (HHG) radio drama appeared in 1978 and the two works – together with others less well remembered – built a voice that sounded very different from the muscle-bound epics of much United States heroic fantasy.

Essentially, the British approach was far more low-key: antiheroic and infused with iconoclastic (often downright silly) humour and puns. (It was also, it must be said, a bit of a boys’ club.)

Eschewing elaborate, world-building infodumps in the text, both Disc­world and HHG instead employed copious footnotes, which allowed them simultaneously to advance the story and poke fun at pomposity. Their favourite comic literary device was bathos: Conan the Barbarian became Cohen; wizards were called Rincewind and world-builders Slarty Bartfast; an enchanted suitcase became demented, snapping ­Luggage; super-robots were transformed into Marvin the Paranoid Android.

Pratchett loved the fantasy genre for its capacity to exercise the “what if?” mental muscle; he called it “an exercise bicycle for the mind”. He was also an accomplished wordsmith: his prose was crisp and free from redundancy and the clean lines of his sentences often sang at you from the page. That skill made the comic punch much harder, and made cheeky, challenging ideas – for Pratchett was a lifetime rationalist – accessible to often quite young readers who may have picked up the books initially for their funny covers and intriguing opening lines.

For both the scale of his vision and the skill of his writing, he was also respected by his peers. The eulogies after his death were led by Ursula K Le Guin and Neil Gaiman, and in his lifetime Gaiman, Larry Niven and Stephen Baxter were among his enthusiastic collaborators.

Long before JK Rowling (a far less elegant wordsmith) and George RR Martin (a far more conventional world-builder), Pratchett got children – and their parents – across the world reading fantasy without shame and with a great deal of loud laughter.

From the obituaries so far, it is also clear that many of those early readers moved on to reading wider and deeper in the genre – and some of them to become writers, in many genres.

With grateful thanks from everybody who also loves fantasy, let him write his own epitaph: “I believe everyone should have a good death. You know, with your grandchildren around you; a bit of sobbing. Because, after all, tears are appropriate on a death bed. And you say goodbye to your loved ones, making certain that one of them has been left behind to look after the shop.”

You left millions of us to do that, Terry. Millions. – Gwen Ansell