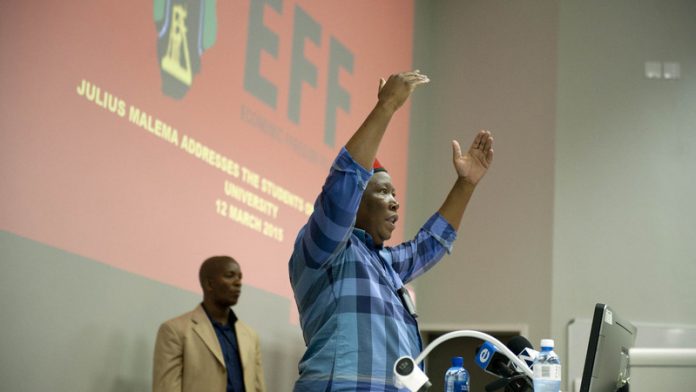 Julius Malema, leader of the Economic Freedom Fighters (EFF), last night laid into the ANC-aligned tertiary organisation the South African Student Congress (Sasco), dismissing it as being too close to the ruling party to challenge it on the student funding crisis.

Speaking at a rally at the Vaal University of Technology (VUT), Malema urged more than 3 000 students of the institution who listened to him to vote out Sasco if they wanted radical change on campus life.

Member of Parliament Malema travelled to the campus in Vanderbiljpark to lend a hand to the EFF Student Command campaign for student representative council (SRC) election. VUT students go to poll today (Wednesday) over SRC positions currently dominated by Sasco.

The EFF Student Command and Sasco are in a two-horse contest for the VUT election. Both have drawn big guns to aid their campaigns. Fikile Mbalula, sports and recreation minister and ANC national executive committee member, addressed a Sasco election rally two weeks ago.

“Here at VUT, what T-Shirts is Sasco wearing today? They are not wearing Sasco T-Shirts. They’ve got ANC logos all over. Now, how do you take my T-Shirt and tell me I’m not delivering?

“You have to think that these people are not different from the management that gets appointed by the minister. They are all the minister’s puppets.”

“We don’t account to anyone except the masses of our people. We don’t care whether you’re white or black, whether you’re a minister or not, you have to speak sense. You must persuade us through argument, not through your position.”

Alliance with ANC
Malema’s criticism of Sasco comes a week after the Mail & Guardian reported that its detractors accused its leadership of having been bought off by Blade Nzimande, higher education and training minister.

Ntuthuko Makhombothi, president of Sasco, rejected that their alliance with the ANC, and which sees their national office located in the ruling party’s Luthuli House, compromised their independence. “We’re not an ANC student organisation, and the ANC knows that. We’re not like the ANCYL, for instance,” he said.

But, politics aside, VUT is one of the institutions troubled by the student-funding crisis. The exclusion of a number of poor students due to the shortage of National Student Financial Aid Funding Scheme (NSFAS) funds sparked student protests last month.

Malema urged students to think of those excluded from NSFAS when voting. Some of these unfunded students are now battling hunger on campus, and need an SRC that will stand up for them, he said.

“We want something that’s going to change the lives of our students. So, all of you when you’re alone tonight … ask yourself: do you still want to continue with the situation you have?

“Think of those who are sleeping next door who didn’t have a meal the whole day. You must look for an SRC that will ensure that those sleeping hungry next door will have something to eat.

“Think of [someone] in third-year, about to complete but the levels of poverty have reached a situation where she can no longer take it. She keeps on soldiering on because of the sufferings at home, and not only at home but the sufferings of our people in our villages.

“Your vote must be able to deliver a plate to the poor of the poorest in this campus.”

Malema received loud applause when he told the students to “think of all those who are squatting with you in the room because they cannot afford to rent a room”.

‘They will have to listen’
The EFF Student Command-run SRC at the University of Limpopo (UL) has secured free daily lunch for poor students, he told the VUT students.

“I’m not telling you a story. If we’re lying don’t vote for us. But call the [UL] students, they will tell you. We said instead of spending too much money on entertainment, let us cut … because you cannot learn on an empty stomach.”

Malema said an SRC led by EFF students would seek accountability from university management in the same fashion as the party’s parliamentarians.

“We do not sleep with management, neither are we scared of management. And every management [of universities] knows that when the EFF comes, they will have to listen. In the same way here at VUT, when we take over she [university vice-chancellor Irene Moutlana] will have to listen. Otherwise she will never enjoy her stay here at VUT. We will make her stay here a nightmare. The same way we’ve made Parliament a nightmare for Jacob Zuma, we will make this place a nightmare for anyone who’s not prepared to listen to the demands of the students.”

From Brits to Beijing, people are going crazy for Makhadzi’s smash hit which was born from a DJ Call Me beat
Read more
Advertising
Continue to the category
Coronavirus