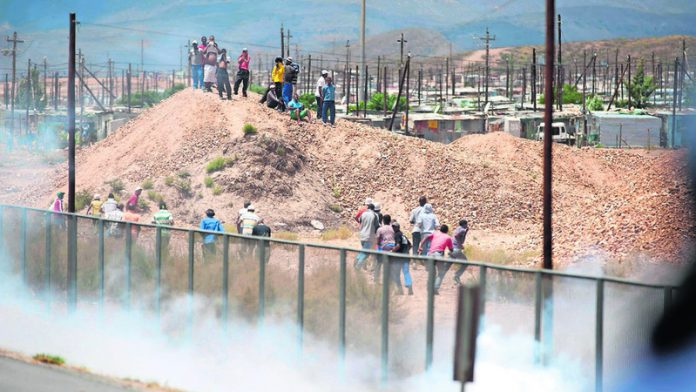 Of concern is that all the issues raised five years ago by the international institute for Human Rights and Business in a presentation to the United Nations Human Rights Council still plague the South African business sector.

The mining and agriculture sectors are most commonly cited for human rights abuses in case studies carried in the report. It was also found that discrimination in the workplace to be prevalent in small and medium businesses.

The commission said “the cases presented (in the study) should not be considered comprehensive”.

Released in March, the report contains guidelines for business and government on how to establish best practice in the sector. The commission selected business at its strategic focus area for the period 2014 to 2015.

Commissioner Mohamed Ameermia told the Mail & Guardian that the SAHRC was particularly concerned about abuse in the microlending sector – which is believed to have contributed to the Marikana disaster – and the difficulty the poor and disenfranchised have in fighting for better conditions, such as access to housing or against abuse by employers.

General lack of awareness
The commission said round-table discussions revealed that there was a general lack of awareness about the business sector’s obligations with regard to human rights, or their contravention of legislation relating to, among others, discrimination, working conditions, occupational safety and the rights of migrant labour.

“The guide is aimed at sensitising business to key events highlighting shortcomings involving human rights, such as Marikana and labour broking,” the commission said.

The guidelines suggest that government should exercise greater oversight when it comes to human rights abuses in business. The Danish Institute of Human Rights carried out the initial research, and it is to be conducted every two years.

Erosion of workers’ rights by labour brokers remains a concern. It is most common in the retail and agricultural sectors.

“Employees are hired under temporary contracts and are classified as the employees of a recruitment agency rather than the business entity for whom they perform their daily work,” the report said.

This means employees have no right to negotiate to improve poor working conditions, wages or benefits.

Businesses are refusing to allow staff to become unionised and act against workers who embark on strike action, despite these rights being enshrined in the Constitution. Workers also face barriers to collective bargaining.

The report said that platinum, diamond and base metal mines, as well as small gold and coal mines, negotiated regularly on a decentralised basis, despite the Chamber of Mines organising centralised negotiations on working conditions, which should take place every two years.

Rights ignored
The researchers cite a number of examples where rights to strike have been ignored. Glencore Xstrata fired 1 000 workers who participated in a nonprotected strike at three chrome mines in Limpopo. Bridgestone South Africa locked out 1 200 members of the National Union of Mineworkers of South Africa and stands accused of attempting to convince workers to sign an agreement to accept lower wage increases.

Workers placed by a labour broker at Astral Foods claimed that they had been working on a permanent basis without receiving benefits. They did not hold union benefits as a result of not being permanently employed.

Wages are also inconsistent across sectors because there is no national minimum wage. The Basic Conditions of Employment Act does, however, permit the department of labour to set minimum wages for sectors in which collective bargaining is not common.

“Wages are usually lowest in those sectors where there is a tendency for poor rates of unionisation and collective bargaining, such as the taxi, hospitality, wholesale, retail, agriculture, domestic work and forestry.”

Women generally earn less that their male counterparts, and are less likely to find formal employment or to hold top management positions.

The report, like the one submitted to the UN, said there was widespread abuse of farm labours and tenants, who are denied adequate housing, experience forced evictions, are exposed to pesticides and subjected to excessive working hours.

Black people are still discriminated against in business, and are unlikely to be promoted to management positions, according to the report.

Willie Spies, representative for AfriForum, said it was hard to generalise about conditions in the agricultural sector. “From my experience the vast majority of workers are happy with the conditions of employment,” he said. “But we are talking about a sector with 50 000 farmers, unlike the mining sector where there are a few major companies operating, so there will be people who do not follow best practice but they are not the majority.”

The Chamber of Mines failed to respond in time to go to print.

Cele and Sitole: Police are ‘handicapped’ by SA laws