Mac Maharaj: In his own words 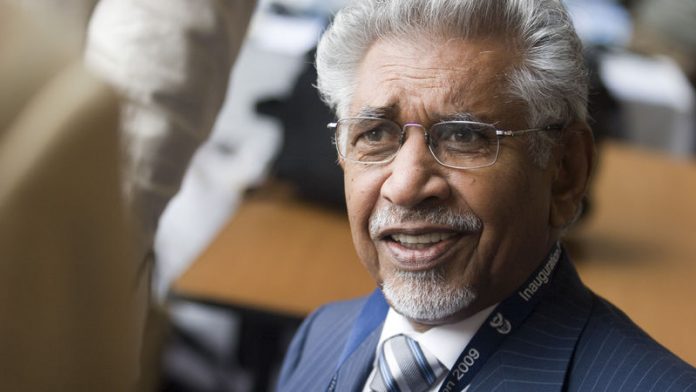 When Mac Maharaj was appointed as President Jacob Zuma’s spokesperson in 2011, he told the Mail & Guardian he had had no choice when Zuma asked him to take the position. As it turned out (rather obviously), the Mac would earn his salary by saving the president’s behind … several times. We’re not saying Mac’s responses were always airtight, sometimes they were far from it, but his entertaining retorts will be missed.

Uncle Mac retires as he approaches the ripe old age of 80. But his most memorable quotes will remain as fresh as the day he served them to the South African public.

1. Zuma came under fire recently for his remarks that teenage mothers should be separated from their babies until they had completed their schooling. He said: “They must be educated by government until they are empowered and they can take care of their kids; take them to Robben Island or any other island, sit there, study until they are qualified to come back and work to look after their kids.”

Many people were outraged by the president’s remarks and Maharaj had to intervene.

“President Zuma was emphasising the need for teenagers to focus on their studies and said children should not be raising children,” Maharaj said. “The statements by commentators that the president singled out girl children only for criticism with regards to teenage pregnancy is incorrect,” Maharaj added.

2. When the Nkandla scandal broke, Maharaj was tested and he had to defend Zuma as political parties and the media sought answers from the president about the money spend on his KwaZulu-Natal homestead. Here are some of the memorable quotes from uncle Mac on Nkandla:

“We urge the media to respect the agencies that are investigating the various aspects of the security enhancements at the residence as speculations and rumour-mongering will not assist the process.”

When public protector Thuli Madonsela sent Zuma the provisional report on Nkandla, Maharaj said: “We have not seen the report as yet, to the best of my knowledge.”

When Zuma did not respond to the demand in the public protector’s final report that he pay back some of the money spent on Nkandla, Madonsela wrote him a letter demanding a response. Maharaj responded and said: “We have received the letter from Ms Madonsela and it is being attended to.”

As the Nkandla debate continues, political parties in Parliament have demanded that the president answer questions as to when he will pay back the money. Some said Zuma was avoiding Parliament. As expected, Maharaj issued a statement defending Msholozi: “The continuing statements by political parties that President Jacob Zuma has avoided going to Parliament are incorrect and are creating a wrong impression.”

3. Zuma sparked controversy when he tried to convince motorists to accept the country’s plan to toll highways around Johannesburg. “We are in Johannesburg, this is Johannesburg. It’s not some national road in Malawi,” he said. Maharaj had to defend Zuma’s controversial comments about Malawi. “The words have regrettably been taken out of context and blown completely out of proportion.”

4. The Gupta guests (linked to Zuma) landing at the Waterkloof air force base in Pretoria to attend a family wedding sparked controversy. Instead of answering questions from the media, Maharaj said he didn’t want to respond to “rumours” about Zuma’s anger. “There’s an inter-departmental investigation going on and, as the presidency, we wouldn’t want to comment while that investigation is going on.”

As soon as the news broke, Twitter users were keen to back Mac up with some thoughts of their own:

Wow. Didnt always agree with what he said, but you can’t deny he was one hell of a politician. At 80 he deserves a break @MyANC_ #MacMaharaj

Maharaj was complimented for his hard work:

I can’t believe he is 80! With all that Stress?? Thank You #MacMaharaj for fighting for the country https://t.co/oItYJifTg7

#MacMaharaj Opposition parties like DA, EFF, FFP and others have hailed Mac Marahaj as one of the country’s great leaders, as he bows out.

Knowledge is about the past ;decisions are about the futureThe bridge is hope and aspiration #MacMaharaj #HorasisGIB pic.twitter.com/evdMCXYn6q

Sensational spin doctor #MacMaharaj is to retire as the @PresidencyZA Spokesperson. But what a Legend he is

#MacMaharaj -Zapiro’s latest victim. Our politicians make the media’s work so easy but Zuma does not make Mac’s easy pic.twitter.com/PmkgBXSu9u

Journalists joined in and shared some of the experiences they had dealing with the struggle stalwart:

#MacMaharaj The other day I phoned Mac and obviously not in good space, he said with you guys, one can’t even piss, what do you want? #Mac