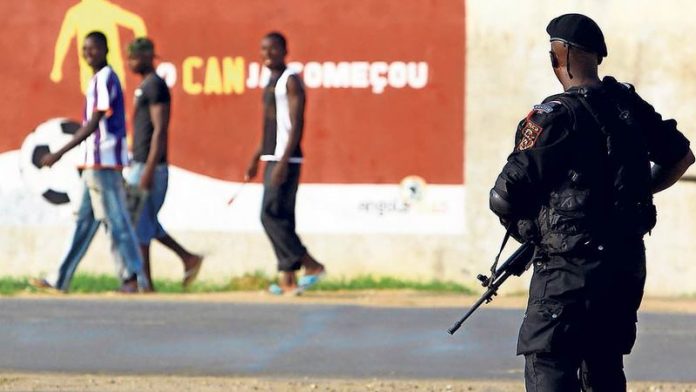 Almost three years after two Angolans disappeared following a street protest, seven men – including police officers and state security agents – have been sentenced to between 14 and 17 years in prison for their murder.

Despite these convictions, it is not known who gave the order for Isaías Sebastião Cassule and António Alves Kamulingue to be killed and how high in government the knowledge of the murders went.

The case shines an uncomfortable spotlight on a culture of institutionalised brutality in Angolan security organs. It has also exposed deep-seated rivalries between factions within the country’s two main security agencies, the Intelligence and State Security Service of Angola, known as Sinse, and the Military Intelligence and Security Service, referred to as Sism. “This case is very significant on many levels,” said Paula Roque, an Angolan and the International Crisis Group senior analyst on Southern Africa. “The whole affair questions the capacity and foundations of the country’s intelligence services and there are many parallels with what is happening in South Africa.”

Cassule and Kamulingue went missing in May 2012 after organising a group of former soldiers to stage a public demonstration in the capital Luanda to claim unpaid pensions.

Following a year of repeated ­denials by the authorities of knowledge of the men’s whereabouts, in late 2013 the office of the attorney general issued a statement to say the pair had probably been kidnapped and killed.

The murder trial, which lasted close to a year and concluded at the end of March, presented grisly details about how the pair were spied on, picked up and killed, and how various officials tried to cover their tracks and apportion blame. It also emerged that Kamulingue wasn’t an activist but paid by Sinse to inform on the protesters. His killing has exposed a major intelligence failure in which they killed one of their own.

One bizarre court testimony claimed a Swiss woman and former Human Rights Watch researcher for Angola, whom the court heard was supposedly working for the CIA, met Kamulingue just hours before his disappearance. But she was not in the country at the time.

Foul play suspected
From the moment of Cassule and Kamulingue’s disappearance foul play was suspected. The families of the missing men mounted a major campaign, with youth groups, opposition parties and international human rights groups staging street demonstrations in solidarity.

The Angolan authorities continued to deny any involvement in the pair’s disappearance, but in October 2013 a report by Sinse, describing how the pair were tortured in police cells and murdered, was leaked to the Angolan website Club K.

According to the Sinse dossier, Kamulingue was shot in the head and his body dumped in a woodland and Cassule, who died from the ­beatings, was thrown into a crocodile-infested river.

The detail about the crocodiles in the river upset a lot of people in Angola and led to photographs of President José Eduardo dos Santos’s head being placed on the body of crocodiles and various images being printed on T-shirts and shared on social media.

The leaking of the Sinse report prompted the attorney general’s office to admit that “given the evidence collected, it became practically proven that the two missing citizens were kidnapped” and that they might have been murdered.

In the weeks that followed the attorney general’s statement, a number of Sinse agents and police ­officers were arrested and Sebastião José António Martins, the head of Sinse, was fired.

Martins, who until a year ago had been interior minister, is the highest level official to have fallen in relation to the Cassule and Kamulingue case, but he has not been charged or directly connected to it.

Martins is protected because of his links with the Catholic Church and is unlikely to face further action, according to Xavier de Figueiredo, a Lisbon-based authority on Angola who edits the respected Lusophone Affairs newsletter Africa Monitor.

The church is said to have influence over the Angolan government.

“There were a lot of rumours at the time that Martins would be charged in connection with the deaths,” De Figueiredo said, adding that he understood the president had directly let Martins know that nothing would happen to him.

Martins is also aligned with Fernando da Piedade Dias dos Santos, known as Nandó, Angola’s former ­vice-president, who was replaced – it is understood against his wishes – by Manuel Vicente, the former state oil company chairperson tipped to succeed Dos Santos, who has been in power since 1979.

Angolan journalist Rafael Marques de Morais told the Mail & Guardian: “Martins is in the camp of Nandó. Dos Santos cannot create serious problems with Nandó’s wing at this point. It would fracture the MPLA and create too many other problems for him.”

A number of other high-ranking officials have been linked in media reports to the case but there have been no other criminal charges.

“These men have been convicted, but we still don’t really know who was behind the killings and who ordered them to be killed,” Roque said.

Marques de Morais said what the Cassule and Kamulingue case revealed above all was just how much rivalry there was between Sinse and Sism. He believed it was top-level figures at Sism who pulled the strings at Sinse to have the men kidnapped and killed.

“Sism has been hijacking Sinse’s mandate for a while, military intelligence is boring, so they would rather chase so-called dissidents,” he said.

“The more of a threat these groups appear, the more power the security services have. From Sism’s point of view, it’s about gaining influence and getting presidential recognition for clamping down.”

And she added:”What the trial does show is that when the opposition and civil society, and even youth groups, make enough noise, they can have an impact and get the courts to take action.”