Athletic records set to be smashed 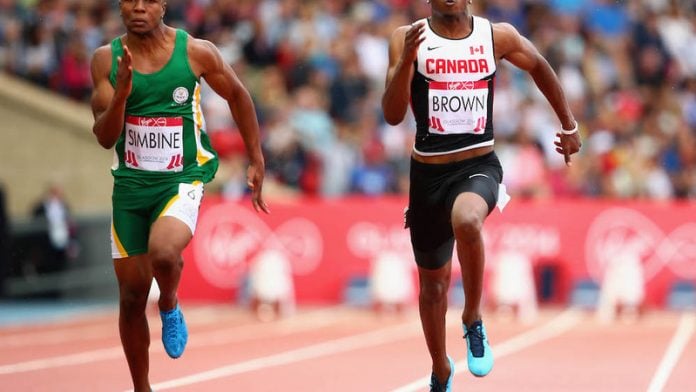 In his book Three Men Named Matthews, athletics coach Richard Mayer describes Coetzenberg Stadium in Stellenbosch as the “spiritual home of South African distance running because of the unsurpassed number of South African middle- and long-distance records that have been set on the track.

“Motshwarateu’s 5 000m and 10 000m national records were set at Coetzenberg, which was also the venue for records for Danie Malan, Johan Fourie, Sarina Cronje, Zola Budd and Colleen De Reuck,” he writes.

The South African Athletics Senior Championships take place at Coetzenberg this weekend and the athletics fraternity has been abuzz with predictions of the stadium witnessing more records. But this time around the air of expectation is not about the distance events, it’s the 100m and 200m sprints that many are eagerly anticipating.

The news that Simon Magakwe – who became the first South African to run the 100m in under 10 seconds at last year’s championships – has been banned for two years for refusing to give a urine sample to the International Association of Athletics Federations (IAAF), has not dashed hopes of new records.

In the 100m event all eyes are on Akani Simbine. The 22-year-old ran a wind-assisted 10.04 in his semifinal heat at the Athletics Gauteng North Championships at Tuks last month, where he also won the final in 10.13, qualifying for the IAAF World Championships that take place in Beijing later this year. He also won the 200m event in a personal best time of 20.27.

Main goal is the title
But Simbine – who will only run the 100m in Stellenbosch – has a singular focus this weekend: to win the title, which has to date eluded him. “My mind is not on breaking sub 10,” he said. “My main goal is to get the title. It’s been eluding me for some time. I’m just going to run and try and get the title – make sure everything is right and getting the title – that’s what I really want.”

He said he decided to run the 100m only so he can still be fresh for competition on the European circuit in May. “I’m trying to spread out the season and lessen the number of races I run before I go to Europe. Last year I ran between 54 and 57 races in South Africa before I got to Europe.”

Simbine believes there has been an increased interest in the South African track and field scene in recent times. “Last year South African athletes did so well at the Commonwealth Games. Simon [Magakwe] ran sub 10 in the 100m. Wayde van Niekerk broke the South African 400m record. We did well in the long jump,” he said. “Everything spiked up in track and field and so there is a lot of excitement about the SA Champs – we want to see what happens … it’s not like anyone is retiring, we are all young and there’s healthy competition between the athletes – I’m excited – it’s time for me to go and get the title.”

Jobodwana impressed at the Texas Relays in the United States a few weeks ago where he ran a wind-assisted 19.87s in his first 200m outdoor event after recovering from a hernia operation. But like Simbine, time will not be the first thing on Jobodwana’s mind this weekend. “I want to qualify for the world champs. I’m not really focusing on time at the moment,” he said.

On the field, South African hammer throw stalwart Chris Harmse will be looking to edge just one digit away from the world record of 21 for the most national titles held by an athlete, when he vies for his twentieth SA Champs victory. Harmse, too, won’t be focusing on measurements. “It’s all about securing the title – I’m not interested in the distance [I throw],” he said.

“The main thing is to compete well and defend my title,” he added. “It will be nice to get 20 – and if I can win it three more times [to break the world record]. But the competition is getting quite tough – there are a lot of juniors coming through.”

Harmse’s toughest competition is likely to come from last year’s runner-up, Tshepang Makhete, who earned silver at the recently held African Junior Athletics Championships in Addis Ababa. However, the transition from the 6kg junior hammer weight to the senior 7.2kg hammer is no breeze and Makhete will not be looking at causing an upset – not this year anyway: “He (Harmse) is already throwing 73/74 – I still need to break the seventies with a senior hammer,” he said.

“There’s a lot of difference in weight between the 6kg and 7.26kg – you have to do a few new things – so for this year I’m just looking forward to going out again and seeing how far I can get with the senior hammer … next year will be a different story. If I can put in a solid winter programme then definitely next year I can challenge for the title.”

All in all the stage is set for what promises to be a thrilling weekend. Athletics South Africa president Aleck Skhosana said that some segments of the championships will be broadcast live on SABC 2; others recorded. “There is more focus now on what the athletes can do and are doing than what the administrators are doing,” he said. “We’ll be selecting the national team for the IAAF World Championships, and the same team with a few more members added will go to the All Africa Games.”