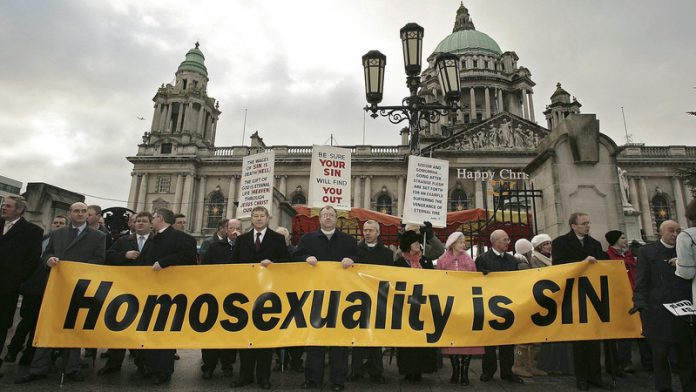 Shorn of a blond wig, outsized false eyelashes, garish eyeshadow, and high heels, the Irish drag artist Panti looked like the strain was starting to tell.

It was not the jet lag from a speaking tour of the United States that he had just completed, nor the slightly frantic attentions of his Jack Russell, who was playing with a ball close to the dance floor of PantiBar, a well-known gay pub-nightclub in Dublin.

Panti’s anxiety stemmed from the vote this May on gay marriage in Ireland. Polls may put the Yes campaign ahead. But this is Ireland, where the public can spring nasty surprises on the Dublin elite in referendums.

“I don’t believe the polls for a single second because if you dig into them you can see that support is very soft,” said Panti, whose real name is Rory O’Neill. “Most people in Ireland are very fair-minded so if you say to them, ‘Do you think gay people should be treated as everyone else?’ they will reply, ‘Yes, of course we do’.

“But people in Ireland are also conservative and fearful of things they don’t really know or understand. And in Ireland it’s very easy to frighten the horses.”

So far it has been conservative lay writers and intellectuals, rather than Catholic bishops and cardinals, who have led from the front against gay marriage.

Their claim that children in care, including orphans, may be forcibly placed with gay married couples if the country votes yes is gaining some traction in traditional, rural parts of the republic.

Panti, a native of County Mayo in the west of Ireland, was worried by the No campaign strategy.

“Their campaign is based largely on fear and disinformation and it is very easy to do that,” he said. “If you have a lady from the country, or even a city, who has a gay cousin, initially she might think, ‘Oh yes, I will vote for gay marriage’.

“But if she turns on the radio and hears all these fears expressed about children and that gays having the right to be married will take away a child’s right to a mother and father then that lady might think twice and have her doubts.

“She might just say she will vote just to keep things the way they are than vote for change.”

Ireland was one of the last countries in Europe to decriminalise gay sex, in 1993. Liberals see the May vote as one of the final milestones in the country’s journey from one dominated by clerics to a modern pluralist republic.

The last major opinion poll by Irish public broadcaster RTÉ and the Sunday Business Post offers mixed messages over the referendum. Whereas 76% of those surveyed last month said they would vote yes, more than 40% of those polled also expressed concern about married gay couples adopting children.

In response to the softness of the yes vote, a one-time cabinet minister and stalwart of the Fianna Fáil party in north Dublin has outed himself at the age of 67.

Pat Carey told the Guardian he had decided to reveal his sexuality last month “because of my worry about the demographic I come from”.

Carey, who was the Fianna Fáil whip in Parliament during Bertie Ahern’s government in the late 1990s and early 2000s, said: “A lot of people who would vote or would be thinking of voting no to gay marriage are simply trying to press the pause button on social change.

“They are not nasty people who despise the gay community but are simply trying to cope with so much radical change in Ireland over the last 25 to 30 years.

“Many are older people, pensioners who always get out to vote. Many of them come from rural backgrounds. I know them because that is the demographic I belong to. I decided to come out and say that I was gay to show them that there is nothing threatening or alien in being so.”

‘Cultural fascism’
Critics of the yes side accuse the campaign for gay marriage equality of being immoderate and intolerant. One of Ireland’s best-known commentators, the author John Waters, said the campaign was “extremely aggressive, with overtones of what I’d call cultural fascism”.

“The behaviour of some of those promoting the amendment make it one of the ugliest mobs to descend on our public life in a very long time,” he said. “The fact that the Dublin media is virtually 100% in favour of the amendment is another factor that may militate against a yes outcome. There’s an ugly smugness in the way they present the issue and almost hold their noses if somebody argues against.”

Perhaps the greatest surprise of the campaign thus far has been Bruce Arnold, a liberal scourge of the Catholic church, who nonetheless is calling for a no vote. “I believe in marriage between man and woman,” said Arnold, whose seminal book The Irish Gulag deals with the exploitation and sexual abuse of children in church-run schools.

“Such marriage is a unique institution for the natural partnership of man and wife and for the building of a harmonious and integrated society based on the propagation of children and the eventual expansion of that seed and blood through many generations.”

Arnold and Waters pointed out that the Irish people had used referendums this century to “bash the government” over larger issues such as the economy.

Last year’s referendum to abolish Ireland’s second parliamentary chamber, the Seanad, backed by all parties in the Dáil, was defeated by voters, who took the opportunity to express their hostility to austerity and the imposition of water charges.

All the main parties are backing a yes vote, along with the taoiseach (prime minister), Enda Kenny. One of his cabinet members, Health Minister Leo Varadkar, outed himself just a few weeks before Carey.

Panti said the vote would define what kind of republic Ireland would be as it looked towards the 100th anniversary of the 1916 Easter Rising.

“If I wake up on the morning of May 23 and it’s a no vote I will personally be devastated. A no vote would tell people like me that people like me are not regarded as full and equal citizens.” – © Guardian News & Media 2015