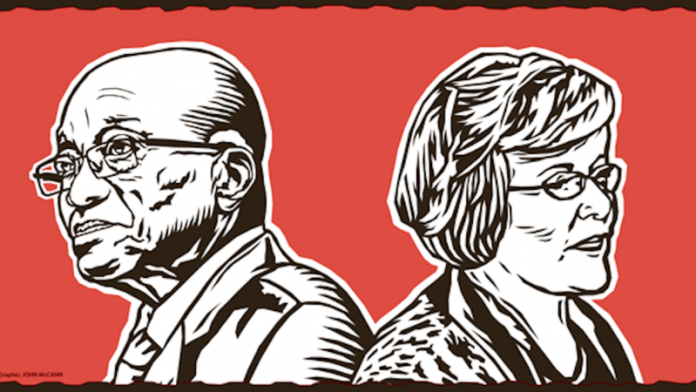 The Zuma-Zille years are drawing to a close. Both Jacob Zuma and Helen Zille won power and took over the leadership of their respective parties in 2007. At least one of them will go in 2015.

There is almost a critical mass of people on both the left and right of the ANC who are now willing to acknowledge that any use that Zuma had to them, their party and the country is outweighed by the damage he has done and the recognition that he is unable to provide the leadership needed.

The main opposition party has reached the same conclusion, albeit for different reasons, in respect of their leader. A critical mass of the Democratic Alliance’s senior figures recently also decided that, on balance, Zille has outlived her usefulness and that it is time for a change. A new leader will be elected at the DA’s national conference in May, and it will almost certainly be Mmusi Maimane.

These two political leaders will leave very different legacies. Zille can be proud of hers. As the awful cliché has it, she took the party “to the next level”. Under her leadership, the DA doubled its share of the vote and began not only to make progress in winning the support of black voters but also in diversifying the leadership of the organisation.

Neither could possibly have happened under the leadership of her predecessor, Tony Leon. He had bumped his head on one glass ceiling. Zille has located the next one.

Although no one should doubt her head-butting abilities, she has been compelled to accept that it is in no one’s interest that she should do so for very long, lest the party’s progress be stalled and the momentum gained in recent years lost.

The inescapable logic is that the DA needs a black leader if it is to maintain that momentum. Maimane is young at 34, but clearly has courage, as he showed during his remarkably powerful speech in the State of the Nation debate in February, when he looked the elder man in the eye and told Zuma he was a “broken” leader. Culturally, it was a brave speech; politically, it was brilliant.

To lead the DA will require a certain brilliance because it is a significantly more complex party, ideologically and organisationally, than it was eight years ago. His challenge will be different to Zille’s. She had to break the mould of the “boys’ club” that ran the DA under Leon. Maimane will need to continue to diversify the leadership and ensure it is tightly led and organised. It will be a delicate balance to strike.

As with any political leader, the most important quality that will be tested will be his political judgment. And one of the biggest, and earliest, tests will be whether to contribute to the hastening of Zuma’s departure from the scene.

How so? The DA judicial review case that challenges the lawfulness of the March 2009 decision to drop serious corruption charges against Zuma is to be heard by the high court in the coming months. After years of legal filibustering, Zuma is likely to finally get his day in court.

Clearly, part of his legal spin now, as reported by this newspaper a week ago, is to argue that not only was he the victim of the Mbeki establishment’s abuse of the prosecutorial process but also that previous attempts had been made to offer Zuma financial inducements to usher him quietly from the political stage – to the tune of R20-million, it is alleged by Zuma’s lawyer, Michael Hulley, in an answering affidavit in the current DA case.

Those within the ANC who wish to reach “a political solution” again would regard that as a small price to pay for seeing the back of Zuma. Indeed, he himself would very probably happily accede to a carefully choreographed departure from power and to put his feet up at Nkandla, were it not for the prospect of the corruption charges being reinstated.

As he and his lawyers well know, this is the downside of the strong rule of law. It is all but impossible, as the DA case shows, to do a political deal that cannot be challenged. The court has affirmed as much in the Richard Mdluli case, which is very much a trial run, in legal terms, of the Zuma case. It also concerned the reviewability of decisions not to prosecute.

The Supreme Court of Appeal rather muddied the water, in contrast to the lucidity of the judgment of Justice John Murphy in the high court at first instance, but the core point remained intact: the original decision not to prosecute Mdluli was bad in law and the National Prosecuting Authority is required to reconsider which charges to reinstate against the politically well-connected former head of police intelligence.

Zuma’s own matter could have a similar outcome, so it’s not hard to see why he has been so eager to ensure that the person whose duty it will be to make the final decision on the reinstatement of charges, namely the national director of public prosecutions, should be someone over whom he has substantial sway.

True, there’s many a slip twixt the cup and the lip, but it’s no harder to see how the decision to drop the charges against Zuma can stand up to the legal test of rationality.

The decision was made, it was privately acknowledged at the time, not on the basis of a measured consideration of the evidence against him but on the expedient political basis that not only had Zuma been the subject of the Mbeki leadership’s attempts to keep him out of power, he was also on the cusp of becoming president in the April 2009 election, having defeated Mbeki at the ANC’s Polokwane conference in December 2007.

If the court decides the dropping of the charges was irrational, then, regardless of the inevitable appeal Zuma’s legal team will institute, it may be the straw that breaks the camel’s back and Zuma may be forced to resign by his own party.

Or, more likely, he will resist such a move tooth and nail and further political turbulence will ensue, causing more damage to institutions and government.

And so we find our way back to Maimane, because an alternative scenario is this: that he, perhaps under pressure from some of his party’s most generous and influential corporate patrons, decides that the greatest act of leadership that he could give the nation early in his term as opposition leader would be to pave the way for Zuma to be quietly convinced to go. That would require delicate navigation and negotiation between Maimane and significant figures in the ANC’s leadership. Maimane would offer to withdraw the judicial review case in the public interest, in return for a cast-iron promise that Zuma would go.

A person or party other than the DA could relaunch the review proceedings but they would be starting from scratch, so it would take years and they would have to have the resources and patience for a task that would look increasingly moot and irrelevant.

South Africa tends to move on quickly. Zuma would be rapidly forgotten. Nkandla and the original corruption matters would, rightly or wrongly, be consigned to the file marked “unfinished business that should, in the broader interests of South Africa, remain so”.

In this way, as Zille departs the stage so Zuma’s own future may lie, at least partially, in the hands not only of his own party but also in those of the young man who faces him across the aisle of the National Assembly.

Many would thank Maimane if he took this approach. It might just be a stroke of brilliant political genius. Certainly, the mood in the investment world and in the C-suites of corporate South Africa would lift, just as progressively minded democrats would celebrate the end of the toxic Zuma years.

And it would provide a powerfully distinctive start to Maimane’s time as leader of the opposition – and potentially mark him out as a nation-builder of note.