Harvesting sperm may save Sudan 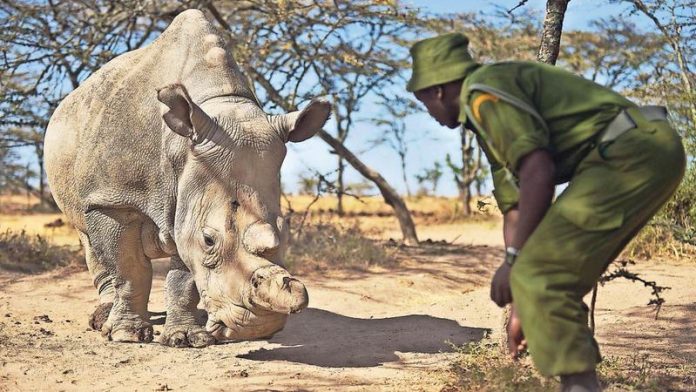 Mohamed Doyo seems to have a dream job. Every evening he patrols the Kenyan savannah, glimpsing lions chasing down darting Thomson’s gazelles, hearing the calls of red-chested cuckoos and, when there is a full moon, seeing the majestic, snow-capped peaks of Mount Kenya in the distance.

But Doyo can scarcely stop to admire the views because he and a large squad of rangers perform an extraordinary job: they must keep poachers away from one of the rarest species on Earth, including the star attraction at the 350km2 conservancy – Sudan, the world’s last male northern white rhino.

“This responsibility weighs so heavily on our shoulders,” says Doyo. “It is sad what human greed has done, and now we must keep watch every minute because it would be unimaginable if the poachers succeeded in killing these last few animals.”

The precipitous decline in the number of wild rhino is the result of the dramatic rise in poaching in the 20th century. About half a million rhino roamed Africa and Asia in 1900. That figure had fallen to 70 000 by 1970, with some species near to disappearing. By 2011, the western black rhino had been declared extinct, an abrupt end to a species that had walked the Earth for five million years.

Recent conservation efforts have rallied overall rhino population numbers to 29?000, but poaching remains a real threat. Some subspecies are more threatened than others, with the northern white rhino leading the most precarious existence.

Wiped out by poachers
An accident of geography accounts for why these magnificent animals, distinguishable from black rhinos by their square lips and hairy ears, were decimated faster than other subspecies.

Northern white rhinos were found in the wild in countries marked by instability, including the Democratic Republic of Congo, the Central African Republic and Sudan. Their population was about 2 000 in the 1960s but, by 1984, only 15 remained in the wild in the DRC’s Garamba National Park, and they were soon wiped out by poachers.

Today, there are only five remaining and three of them are to be found at the Ol Pejeta Conservancy, a sprawling windswept ranch of dun-coloured thickets and acacia trees in central Kenya, where efforts to save the species are centred.

All the pressure is on Sudan, the last male of the species, to mate with Fatu and Najin, the two female rhinos with whom he shares a 300-hectare enclosure. But continuing the lineage may be too much to ask of a 42-year-old male who spent most of his life in a Czech zoo before being transferred to Kenya in 2009, in the hope that life in the wild would offer a better chance at procreation.

Not that the pressure seems to wear too heavily on Sudan. A massive presence, weighing in at 1.2 tonnes and coloured a silvery brown with speckles of the dung and mud in which he likes to wallow marking his thick skin, Sudan may have noticed he is a bit special.

Kept under 24-hour armed guard, with a stream of visitors coming to see him every day, he plays along, rising with great reluctance at the call of his keeper before munching the lucerne grass, of which he is especially fond and inviting his keeper to rub his back.

Yet Sudan, who is in old age (rhino life expectancy is 40 to 50 years), embodies the struggle to beat the curse of poaching that has driven these animals, which have few natural predators in the wild, to the brink of extinction.

Rhino conservation
The Ol Pejeta ranch is also home to 106 black rhinos, making it the biggest rhino conservancy in East Africa. “The pressure from poaching is constant,” says Richard Vigne, a second-generation Kenyan of British origin who is chief executive of the conservancy. “Securing rhinos has become so expensive and risky that many conservancies have given up keeping rhinos altogether and brought them here.”

The appetite for killing rhinos to saw off their horn is fuelled by demand in the Far East, which has risen as countries such as Vietnam, one of the biggest consumers of rhino horn, and China have become more prosperous.

Rhino horn is made of keratin, the same material as human toenails, but an unfounded belief that it cures everything from hangovers to cancer and can serve as an aphrodisiac has fed demand and sent prices soaring to an estimated $75 000 a kilogram.

Vigne says progress has been made in tackling the poaching menace, but it is uneven. “In fairness to the Kenyan government, they have done a good job, especially in tightening sanctions for those caught. But it’s not the same everywhere and in places such as southern Tanzania, poaching is simply out of control.”

To win the support of local residents, who are often resentful of the huge tracts of land required to keep animals in their natural habitat, the Ol Pejeta ranch is championing an integrated land management model that sees it keep cattle and grow wheat on sections of the land, which means employment and more income to fund conservation efforts.

A sharp downturn in tourists coming to Kenya has squeezed revenues, prompting the conservancy to launch an online fundraising campaign.

With the clock ticking on Sudan’s life, veterinarians are expected to propose keeping the species alive by harvesting semen from Sudan and combining it with eggs from a female northern white rhino to create an embryo that will be implanted in a southern white rhino. – Guardian News & Media 2015