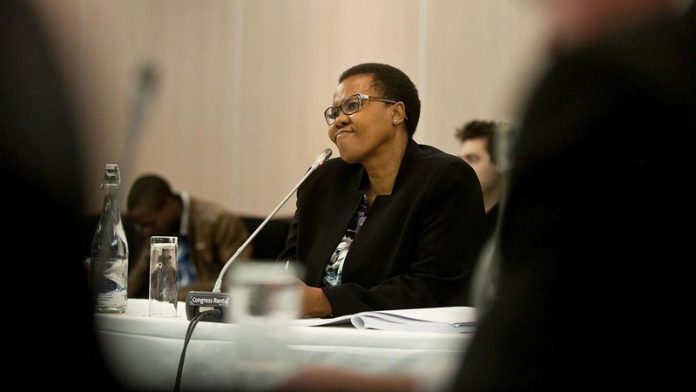 The Judicial Service Commission (JSC), which interviews judges to be nominated to the president for appointment, was in quite singular form during its April sitting in Cape Town: rigorous, independent, mindful of the transformative issues facing a judiciary bereft of female representation and its members apparently voting with their conscience rather than for particular constituencies.

This has not always been the case. The 23-person panel — made up of judges and the chief justice, the justice minister, members of Parliament from the majority party and opposition parties and representatives from the advocates, attorneys and legal education professions — has evolved with the country’s nascent democracy.

At the time, there was a seeming lack of cynicism reflective of the heady early days of democracy. Then the realpolitik of South Africa’s post-apartheid era and the accompanying waning innocence began to be felt within the commission — a constitutional body whose configuration was created to ensure some sort of balance between the interests of politicians and the sometimes political, occasionally personal, interests of those from the legal fraternity.

President Jacob Zuma, especially fond of “lawfare” (think “law” and “warfare”) and with several courts finding against him on a range of decisions, heralded a more politicised commission when he began his first term in 2009.

Zuma moved away from the precedent set by his predecessors by overseeing the installation of four ANC members from the National Council of Provinces (NCOP) in the JSC. Under presidents Nelson Mandela and Thabo Mbeki, these four positions had been filled by one ANC member and three from opposition parties. Whereas the Constitution says three out of the six National Assembly members on the JSC must be from opposition parties, there is no such requirement for NCOP members serving on the body.

This brought the ANC representation at the commission, including the justice minister, to eight, a powerful position from which to form a caucus to influence the JSC’s nominations. This influence has not, however, meant a conveyor belt of executive-minded judges being appointed — merely the potential for such.

The commission can be human, very spikily so at times, and when interests collide curious outcomes sometimes prevail. This was the case in April 2013 when, following a heated, daylong discussion about a letter to the media by former commissioner Izak Smuts criticising the JSC for not appointing white males, the commission interviewed candidates for positions on the Supreme Court of Appeal.

The commission was in a fractious mood and gave Eastern Cape High Court Judge Clive Plaskett, who has a decent human rights record as a lawyer and had written several judgments in favour of citizens suffering because of government deficiencies, a torrid time. South Gauteng High Court Judge Nigel Willis — an apparent conservative libertarian who, in one housing judgment, questioned progressive jurisprudence already set down by the Constitutional Court rulings — was given an easy ride before being appointed.

When the commission sat in April 2014, just before the national elections, it included heavyweights like ministers Jeff Radebe and Ngoako Ramatlhodi. Both were political bruisers mindful of the role the judiciary was increasingly playing in settling political and socioeconomic cases that affected the ANC, the government and members of both.

Ramatlhodi had gone public, in a 2012 lecture and in an opinion piece for a national newspaper, about his perception that the judiciary was acting in a “counter-revolutionary” manner by finding against the executive in various cases.

Both men appeared to provide strict political guidance to the ANC caucus that voted along constituency lines, with the four NCOP representatives appearing to be nothing more than voting fodder.

Neither Justice Minister Michael Masutha nor parliamentary justice committee chairperson Mathole Motshekga appears able to do that job in the current JSC, which has sat twice so far. Masutha does not have the political heft to outweigh senior ANC politicians like NCOP chairperson Thandi Modise or Parliamentary house chairperson Thoko Didiza, who are independent thinkers and strong-willed, and Motshekga appeared a maverick during interviews.

This has allowed individual commissioners the freedom to exercise their conscience in a manner that leaves much optimism for the commission to express its collective independent mind, imagination and rigour.

This freedom was demonstrated by the nomination of KwaZulu-Natal deputy judge president Achmat Jappie to fill the division’s top post. It was reported that Jappie, the sole candidate for the position, was given a torrid interview by the ANC members of the commission, but was nominated after more than two hours of deliberation. Business Day reported that the decision was unanimous, with the ANC members eventually coming around to the commission’s collective viewpoint — an outcome that is healthy for the commission and how it functions.

Aside from the powers of persuasion of some of the country’s top legal minds who sit on the commission, this could also be attributed to the sort of ship that Chief Justice Mogoeng Mogoeng runs. Law Report has confirmed that when the commission’s new politicians were initially briefed about their roles, Mogoeng stressed the need for independent thinkers and voting for candidates by conscience rather than constituency.

In the October 2014 and April 2015 interviews this openness to interrogate was especially evident among the likes of Modise, Didiza and advocate Lindi Gcabashe, one of two representatives from the advocates’ profession on the commission, who all grilled candidates on gender issues and transformation. Previously, far more time was spent by commissioners such as Ramatlhodi on how judges interpreted the separation of powers doctrine and on castigations or observations about how the Bench was hampering the government’s work with every pro-poor ruling handed down.

In recent interviews, male judges were quizzed on their approach to cases involving gender-based violence, especially in rural areas where patriarchal interpretations of tradition and custom are used as a defence. Male candidates were asked to show how they had, if at all, helped to develop female legal practitioners and to suggest new ways to expedite their rise through the system.

Female candidates such as advocate Nomawabo Msizi, who was vying for an Eastern Cape High Court position, and acting appeal court Judge Nambitha Dambuza, who was successfully recommended with the Pretoria high court’s Judge Rammaka Mathopo for the appellate court’s two vacancies, were questioned what could be done to expedite gender transformation in the judiciary.

The questions highlighted some of the structural changes required in the judicial divisions.

Dambuza and Msizi offered practical solutions, including allowing flexibility on the job descriptions of their personal assistants to allow them to pick up children from school while the judges were sitting in court, and ensuring that female judges acting in divisions far from their homes were not placed on the weekend’s urgent court roll to allow them to head back to their families.

If concerns about the separation of powers had gnawed at commissioners, it certainly wasn’t evident in the choices the commission made — again underlining a refreshing independence of mind.

Several candidates who had ruled against the government in controversial “lawfare” cases were nominated. These included Mathopo, who had ordered the National Prosecuting Authority to hand over the so-called spy tapes to the Democratic Alliance in its legal pursuit to have the 2009 decision by former NPA head Mokotedi Mpshe to drop fraud and corruption charges against Zuma reviewed.

Likewise, advocate Selby Mbenenge, who cleared former prosecutor Glynnis Breytenbach of allegedly politically-linked disciplinary charges when she was at the NPA, was appointed to the Eastern Cape High Court.